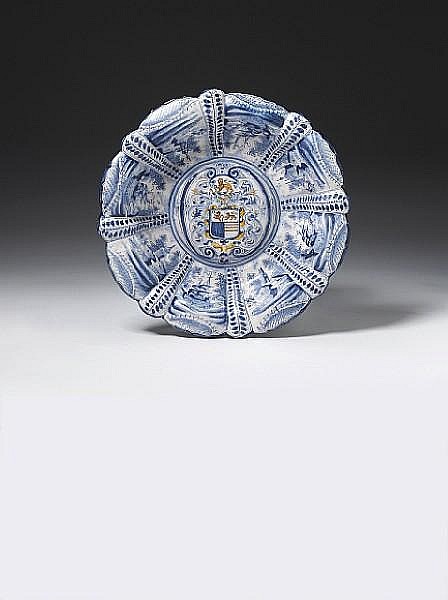 Circa 1649-51.
The domed central boss finely painted in blue, orange, yellow and manganese with the full arms of Markham impaling Faringe, within feather-like mantling and a scrollwork cartouche, the border moulded with eight convex panels alternately painted in blue with a ship or a curious building among distinctive trees, the panels divided by flutes each painted with a feather-like motif, about 38.5cm to 39cm diam (restoration to a small rim section at 1 o'clock, minor chips and short fine cracks to the underside of the rim)

In his catalogue of English Delftware exhibited at the Rijksmuseum in 1973, Michael Archer first suggested that a number of dishes, jugs and caudle cups formed a distinctive group attributable to a single maker. Lionel Burman took up this idea in two papers to the English Ceramic Circle in 1992/93 (Vol. 14, pt. 3 and Vol. 15, pt. 1). Burman discussed three dishes bearing the initials R.E.N, identified as Richard Newnham and his wife Elizabeth. Newnham was proprietor of the Pickleherring Pottery in Southwark. In his Victoria and Albert museum catalogue of Delftware, item A56, pp. 104f, Michael Archer expands on his research and discusses some of the characteristics that link the landscape painting found on pieces belonging to this group.

The shape of the Markham dish is highly distinctive and relates to three dated examples of precisely similar dimensions, which were possibly all cast from the same mould. One of these in the Fitzwilliam Museum (Glaisher Collection no. 1408-1928) is painted with coloured grotesques and is dated 1649. Another in the Longridge Collection (Grigsby’s catalogue, fig D83, Lipski and Archer fig 98) is painted in blue with the arms of the Grocers’ Company together with initials of the Master and the date 1651. The third, very similar moulded dish is the celebrated ‘Clarkes’ dish in Brighton Museum (Willett Collection no. C.557-1901, Lipski and Archer fig. 97) with the arms of the Worshipful Company of Parish Clerks and the date 'Anno Dom 1649'. The proportions and profiles of the Clarkes and the Markham dishes are identical in all respects.

Another moulded dish of the same shape but slightly smaller is also in the Fitzwilliam Museum (Glaisher Collection no. 1309-1928). Like the Markham dish, this is painted in blue with an armorial centre and alternate border panels of landscapes with distinctive buildings. This style of painting ultimately derives from Dutch 'maiolica' of c.1620-40. For example see Frits Scholten, Dutch Majolica and Delftware from the Edwin van Drecht collection (1993), figs 46, 137, 197. The English delft painters were clearly influenced by Dutch Delftware and they chose to include typically Dutch ships in their landscapes. Lionel Burman discussed these ships in his ECC papers, identifying the vessels seen on the Markham dish as a Dutch type known as a Fluit or flute, a long-distance cargo vessel. Burman suggested that these were included on the dishes as symbols of commercial success and fortune.

Five boats of a different type, identified by Burman as a Dutch 'Buss', occur in the border of an English delft plate, also dated 1649, once again in the Fitzwilliam Museum (Glaisher Collection no, 1308-1928 , Lipski and Archer fig 127, Rackham fig 83C). The style of painting on this plate is very close to the Markham dish, featuring a building in the centre, similar trees and a distinctive curved picket fence. These recurring features can be noted on other delft vessels almost certainly made in the same factory. A caudle cup in the British museum (1952,4-2,1), inscribed 'EDWARD:SEARLE:AND:ELIZABETH 1650', bears a continuous landscape with buildings and ships and similar trees. A posset pot with panels of buildings and ships with similar trees, dated 1651, is illustrated by Lipski and Archer, fig 891. Perhaps the most impressive piece belonging to this group is a large jug, initialled and dated 1650, bearing the arms of the Apothecaries Society (Fitzwilliam Museum, Glaisher Collection no. 1311-1928, Lipski and Archer, fig 969). The neck of the jug is painted with similar buildings on striped mounds and here again are similar trees and picket fences.

The Pickleherring factory painting style continued for at least another decade. The dish in the V & A with the initials of Richard and Elizabeth Newnham and date 1657, is painted in colours with a landscape with towers and other fancy buildings, similar trees and very similar curved picket fences (collection no. C.57-1971, Archer Delftware fig A56). Similar ships, buildings and trees occur on a jug with a panel of Charles II’s portrait, dated 1660. A later derivation of this painting style is seen on a caudle cup inscribed 'Bee Merry and Wise 1660' (Lipski and Archer fig 743), while similar derivative painting occurs in the border panels of three 'Fecundity' dishes dated 1661 and 1664 (Lipski and Archer figs 110, 111 and 113).

The shape of this moulded dish is rarely found after the mid-17th century. Two examples are known with fancy cartouches containing initials. One, dated 1660 is in the Fitzwilliam (Collection no C.8.2001), the other, larger example dated 1670 was in the Simon Sainsbury collection (Lipski and Archer fig 117).

The Markham dish is decorated with the arms of MARKHAM, with a crescent for difference, impaling FARINGE. The genealogy of the Markham family, originally of Markham in Nottinghamshire, is well documented, but a detailed search through the pedigree of the Markham family has failed to reveal details of a Markham - Faringe marriage. Because of the proximity of the Pickleherring Pottery to the City of London, a search has been made through available parish registers of the period and through Apprenticeship Enrolments and other records of City Guilds. Successive generations of Markham are occasionally listed, for instance in the former parish of St Dionis, Backchurch and in the Fishmongers' and the Vintners' Companies beginning in 1625. While company records are frequently incomplete, we can find no evidence of anyone named Markham having been elected to the status of Master - a distinction that might merit such a dish as this to be commissioned. Nor has the name Faringe been found among these companies' apprenticeship records - a hopeful search made because of the frequent incidence of inter-marriage within a Company.