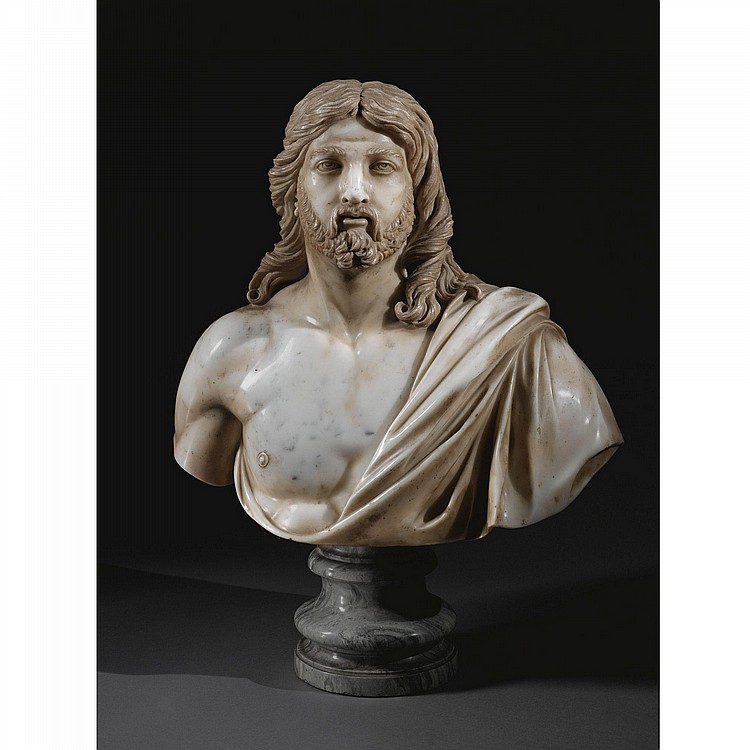 Birgit Laschke, in her recent monograph, illustrates many works that bear close affinity to this magnificent bust of Christ produced between 1558 and 1563. The figures of Adam and of Moses (fig. 1) in Verona marble together with the white marble figure of Christ in Santa Maria del Servi in Bologna dating from 1558-1562, show specific characteristsics which further place the bust in Montorsoli's oeuvre. These include the pierced eyes, the small parted mouth, the distinctive treatment to the hair and the double circled nipples. Note also the St. John the Baptist and a second Christ in Sant' Annunziata, Florence, executed in 1562-63, and listed by Laschke as having been unfinished and subsequently completed by his pupil Fra Vincenzo Casali.

This "heroic" depiction of Christ is also similar to Montorsoli's earlier works and unlike some of the more subdued sculptures executed under the influence and restrictions of the Counter-Reformation. Compare his Triton and several figures from the Church of San Matteo in Genoa and the Sannazaro Tomb in Naples.

The present image derives from the ancient sculptures of Zeus or Zeus-Serapis, which Montorsoli would have encountered during his sojourn in Rome.

Giorgio Vasari (1511-1574) gives a detailed and extensive biography of Father Giovan Angelo da Montorsoli who was born in Poggibonzi in the village of Montorsoli, close to Florence. As a child he learned stone cutting locally in the company of, among others, Francesco del Tadda, from whom he learned the art of using colored stones in sculpture. Later, he obtained more experience as a young sculptor in Rome and then in Florence where he was recognized by Michelangelo, for whom he initially worked as a stone cutter, and with whom he worked on some of the master's most important sculptural commissions. However, in 1530, having received instruction in the religious houses of Florence and Arezzo, he became a Servite friar to the Annunziata in Florence.

Michelangelo, who was working in Rome in 1532, called upon Montorsoli to help with the restoration of some ancient statues in the Belvedere, in particular the Apollo and the Laocoon for Pope Clement VII. Indeed, Montorsoli's debt to Michelangelo is echoed throughout his career. Later he worked on the Medici chapel in Florence where he carved the statue of St. Cosmos and Michelangelo had specifically requested that he polish and execute the "difficult undercuttings" on his figures of the Medici Dukes for the tomb in San Lorenzo (Vasari, op. cit., p.536). Later he was again in Rome working on the tomb of Julius II, after being sent for by Michelangelo. He also made a brief visit to France to work for Francios I but failed to complete any of his commissions at this time due to the political and wartime distractions of the monarch. In 1539, after a visit to Naples to work on the Sannazaro monument, which he finished in Tuscany together with Ammanati, he completed Bandinelli's unfinished statue of Andrea Doria at Genoa. In 1543, he carried out the major sculptures on the Tomb of Andrea Doria in San Matteo in Genoa and in 1547 he returned to Naples to complete two of his most famous works, the Fountains of Orion and Neptune.

Toward the end of his life, between 1558 and 1561, having returned to Florence, he was summoned to Bologna to work on one of the most important altars in the Servite Church. This altarpiece, which took him 28 months to complete, was centered by a figure of a nude Christ. He spent his last two years in Florence where he worked on the Tomb of the Artists together with Giorgio Vasari, where another figure, of a nude Christ, impressed his admirers. Montorsoli himself was buried in the tomb and it was noted by Vasari that Michelangelo attended the ceremonies.