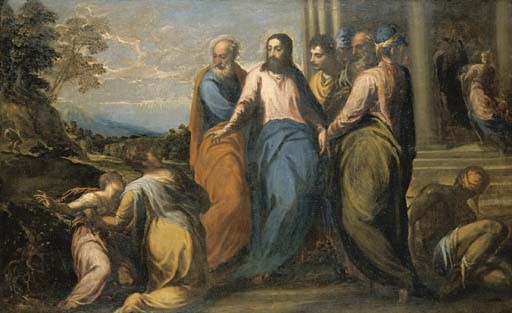 PROPERTY FROM THE ESTATE OF EDWIN L. WEISL, JR.

Schiavone puts us outside the house of Jairus, one of the leaders of the synagogue whose ailing daughter Christ has come to cure. A messenger reports that the girl has already died. Christ turns to the crowd, forbidding all entry to the house except for Saints Peter, John and James - who flank Jesus at the base of the steps - and Jairus and his wife. Boldly painted, the massive central figures form the apex of a dramatic pyramid at the center of the composition. The supple curving gestures, the flowing draperies, and the figure rushing up the stairs to the right establish dynamic pictorial rhythms which articulate an anticipation of the dramatic miracle about to take place. 'He said, Weep not; she is not dead, but sleepeth. And they laughed him to scorn, knowing that she was dead. And he put them all out, and took her by the hand, and called, saying, Maid, arise. And her spirit came again, and she arose straightway: and he commanded to give her meat.' (Luke, 8)

Andrea Schiavone, so called because he was born in Dalmatia, then part of the Venetian Empire, had established himself in Venice by the late 1540s. A contemporary of Titian, Lorenzo Lotto, and Paris Bordone, he seems, perhaps more than any of them, to have been profoundly influenced by Parmigianino in particular, and by the Central Italian Mannerists in general. So it is perhaps not surprising that Vasari himself should have commissioned from him a large battle painting, now lost. His early paintings such as the Adoration of the Magi (Pinacoteca Ambrosiana, Milan) display a totally unorthodox use of colour - a peculiar range of yellows, rust and gold - and tightly compressed compositions made up of intricate patterns of flowing figures. At about this time, the poet Pietro Aretino wrote to Schiavone praising his rapid virtuoso technique which he said had astounded Titian. In the 1550s and thereafter Schiavone pursued a greater sobriety and control; his figural types become more monumental and the increasingly dark tonality of his later paintings, notably the Christ before Herod (Museo di Capodimonte, Naples), give them a heightened atmospheric drama that anticipates the late works of Titian. Schiavone was an expressive and highly original painter - he was among the earliest Venetians to paint the nocturne - whose idiosyncratic brand of Mannerism would have impressed his younger, or more conservative, contemporaries, Jacopo Bassano, Tintoretto and Palma Giovane.

This painting, which Waagen described when he saw it at Taplow as 'powerful in color, and more carefully finished than usual' has been dated by Richardson to 1549-50, right on the cusp of the moment when his most exaggerated slapdash technique gives way to a more controlled monumental approach. The figure style, defined by small heads, wide bodies and volumetric draperies, shows the continuing influence of Central Italian Mannerism, while the sun setting on the broadly painted landscape rationalises the somber, twilit tonality of the picture as a whole. Richardson compares this to paintings such as the Midas at Hampton Court and the Supper at Emmaus (Gemäldegalerie, Berlin), both dated by him to circa 1550. However, the figural types are so different from the almost rubbery contours of the protagonists in his paintings of the late 1540s that it is tempting to place this later, closer to the Christ on the Road to Emmaus (Richardson, op. cit. no. 243, fig. 187) painted for the Pellegrino Chapel (S. Sebastiano, Venice) around 1557. The dramatic lighting and the elongated figures with draperies painted in broad, dry brushstrokes that characterize Schiavone at this moment exerted a crucial influence on the young Jacopo Tintoretto in the 1550s.