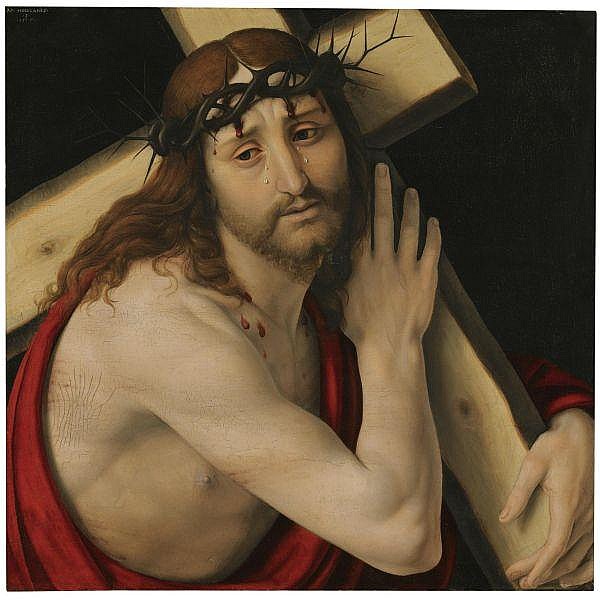 - Andrea Solario , Milan circa 1465 - 1524 Christ Carrying the Cross tempera and oil on panel, transferred to canvas

Francesco Galgani, Siena, by 1851 until sometime before 1890;
The ex-Galgani painting is possibly identical with the one on the same theme, said to be Solario when it was offered to the Louvre on July 22, 1938;υ1
This work, from Grenoble Collection, measuring 48 by 51 cm, was stated to have once belonged to the Milanese dealer Baslini;
With Heim Gallery, London, 1967;
Private Collection, 1981;
Jozef Grabski, Vienna, 1983, whence acquired by the present owner.

In works of such emotional power as this Andrea Solario's contribution to the development of devotional art in the north of Italy in the 16th century was to prove of fundamental importance. The emotional content and immediacy of this most powerful of devotional images is here given added force by the introduction of the new dramatic language of expression and gesture which Solario had learned from Leonardo da Vinci, and combined with an attention to detail he had seen in the works of Antonello da Messina and the northern masters. The result was a transformation of this traditional iconographic type into a new image, in which the tears and blood of Christ are rendered in the most intimate detail, and whose devotional purpose proclaims the words of Saint Matthew's gospel: 'If any man will come after me, let him deny himself, and take up his cross and follow me'.

The subject is taken from the Gospel of St. John (19:17), the only Evangelist who states that Christ Himself carried his cross. As David Alan Brown has observed, Solario and his contemporaries would have been familiar with mystical texts such as Thomas à Kempis' De imitatio Cristi (c. 1418) and in particular the Pseudo-Bonaventure's Meditationes vitae Cristi also known as La meditatione de la passione de Cristo (c. 1300) which enjoyed particular popularity and ran into several editions at this date. A popular anonymous late fifteenth-century woodcut, widespread through northern Italy, displays a robed Christ carrying the cross and Solario may well have been aware of
this.υ2 A more probable source, however, would have been found in a design by Leonardo himself, known through a metalpoint drawing of the Head of Christ in the Accademia in Venice (fig. 1) and through painted copies from his school or following (fig. 2) which strongly suggest that a three-figure painting or cartoon may once have
existed.υ3 Solario would undoubtedly have been familiar with Leonardo's designs and followers when he was in Milan from 1495 until his departure for France in 1507. The drawing is generally dated by scholars to the end of Leonardo's first stay in Milan, that is to say, around or just before 1499-1500. In the derivative paintings the figure of Christ is depicted naked, flanked by two tormenting soldiers, with his head as in the drawing turned in contrapposto toward the viewer. Solario's Christ, however, does not confront the viewer directly with his gaze, but instead looks away outside and to the left of the painting. Brown suggests that this may indicate that the painting was once accompanied by a pendant, perhaps of the Virgin in prayer. A similar diptych by Bernardo Luini, once attributed to Solario, is now in the Museo Poldi Pezzoli in Milan. Such diptychs were at this period much more popular in the north than in Italy but the extraordinary technical brilliance with which Solario depicts the drops of blood
falling from Christ's crown of thorns on to his chest suggest that he might have come into contact with Netherlandish models, or at the very least the work of Antonello da Messina (c.1430-1479), whose numerous treatments of the theme of Ecce Home he might have seen during a probable visit to Venice in or around 1490.υ4 What cannot be doubted is the way in which the impact of Leonardo's new ideas of dramatic gesture has transformed Solario's approach to the subject by comparison with his only earlier treatment of the theme, a Cristo portacroce con certosino in the Pinacoteca Civica Tosio Martinengo, in which the figures are set full-length in a landscape.υ5
The reduction of the theme to half-length and the viewing of the subject up close completely alters the impact upon the viewer and would help change the iconography of this subject for years to come.

Solario returned to the subject of Christ carrying the cross once more in his career, in a later panel now in the Galleria Borghese in Rome (fig. 3) perhaps painted around 1511.υ6 A preliminary drawing for this painting survives in the Albertina in Vienna (fig. 4).υ7 In both these works Solario introduces the flanking figures of soldiers on either side of Christ, one of whom pulls Christ by means of a rope attached around His neck. The figure of Christ, however, remains very much the same, with some differences in His left hand as it holds the cross and with less dramatic emphasis on the wounds on His body. Crowe and Cavalcaselle record what may have been a copy of the Borghese version also in Galgani's collection, for it depicted soldiers on either side of the figure of Christ, but they noted that it was 'ruined by abrasion and of doubtful quality'. An early copy of the present painting, perhaps Sienese and long associated with Sodoma, was formerly in the Bandinelli collection and is now in the Monte dei Paschi collection in Siena.υ8