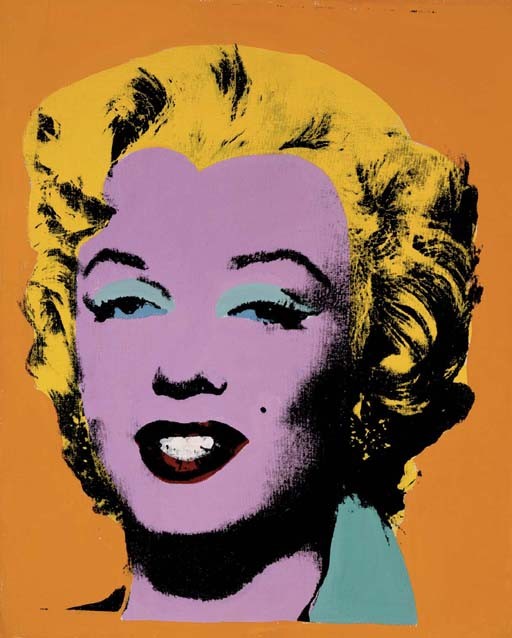 PROPERTY OF A WEST COAST COLLECTOR

Hollywood exploited Marilyn Monroe's legendary appeal as a "sex symbol" and standardized her screen image into that of the "dumb blonde." Immediately after her tragic death in 1962 Andy Warhol grabbed the idea of Monroe as a pre-fabricated media product and translated it into some of his finest and best-known early canvases. When he created his own "Marilyn" in different sizes, colors, and configurations he took a position that was cool or ironic and yet mysteriously sympathetic. Warhol included several examples in his first solo exhibition of paintings in New York City, in November 1962. In later years he evoked the mind-boggling collection on view at Eleanor Ward's Stable Gallery with these words: "[It] had the large Campbell's Soup Cans, the painting of a hundred Coke bottles, some Do-It-Yourself paint-by-numbers paintings, the Red Elvis, the single Marilyns, and the large gold Marilyn." (Cited in POPism: The Warhol '60s, by Andy Warhol and Pat Hackett, 1980). This embrace of supermarket essentials and larger-than-life stars heralded Warhol's move from a secure career as a commercial illustrator to a crazy adventure in the emerging Pop Art movement. He had staged a startling panorama of American consumerism, commercial art, mass media, and popular entertainment.
Orange Marilyn belongs to the twelve "single Marilyns" mentioned by Warhol in POPism, all of which measure 20 by 16 inches. While it was not one of the eight that the artist sent to the Stable Gallery in November 1962, it did represent him five months later at the Washington Gallery of Modern Art, Washington, D.C., in the group exhibition The Popular Image. By that time several of the pictures in this category had been informally named according to the color used for their backgrounds, often with words signify a flavor as well as a hue. Thus the four paintings of Marilyn Monroe on display at the Washington Gallery of Modern Art in 1963 were titled Orange Marilyn, Cherry Marilyn, Grape Marilyn, and Mint Marilyn. (The latter has long been in the personal collection of Warhol's artistic contemporary, Jasper Johns).
For two decades numerous biographies and monographs have reminded us that Warhol grew up in a very poor household with more than his fair share of ill health, shyness, and anguish. Therefore it should not be surprising that the golden legend and the grim demise of Marilyn Monroe struck chords within him. He and she had climbed the ladder of professional success in the same years. In 1949 such magazines as Glamour and Harper's Bazaar began to publish Warhol's illustrations. In 1950 Monroe appeared in Asphalt Jungle, the first of her twenty-three film appearances. Both of them had to endure the difficulties that confronted a vulnerable person whose creative talents were often misinterpreted and rarely appreciated for their nuances. Thus everyone could gauge Monroe's presence but few bother to praise her well-honed talents as an actress and comedienne. In Warhol's case, his contribution to the Pop Art phenomenon quickly inspired a vocal contingent to pigeonhole him as a publicity hound and a phony. And the fact that he did not hide his sexual orientation further hampered his quest for validation and respect as a "serious" artist.
Warhol began his Marilyn series soon after Monroe's death in Los Angeles at the age of thirty-six. Newspaper accounts of the tragedy appeared on the east coast on the morning of August 6, 1962, the day of Warhol's thirty-fourth birthday. He doubtless saw the extensive coverage in the New York Times, where the headings of the various columns announced: "Star's Body is Found in Bedroom--Pills Near--Police Say She Left No Notes - Official Verdict Delayed." One of these stories stated that Monroe had been an "unwanted, illegitimate baby." It suggested that her "incredibly glamorous career" veiled an array of personal troubles, including miscarriages and childless marriages. And it quoted a remark the actress made in a recent interview, which had just been published in the August 1962 issue of Life magazine: "I was never used to being happy, so that wasn't something I ever took for granted."
In the weeks prior to Monroe's death Warhol had been exploring an eccentric and highly topical approach to realist art. He used the silkscreen process to stencil a photo-derived image on top of a hand-painted background. Head and shoulders portraits of the sexy young actors Troy Donahue and Warren Beatty were his main focus, and his custom-made silkscreens reproduced the kinds of publicity photographs that abounded in the latest teen and movie magazines. Warhol soon learned how to make the inky detailing of the silkscreen stand out against the flat color beneath, creating an electric effect. For his new Marilyn series he ordered a silkscreen enlargement of a detail of a bust-length photo taken by Gene Korman for the promotion of the 20th Century Fox film Niagara (1953).

For a colored early canvas like Orange Marilyn Warhol devised a somewhat time-consuming procedure to get the illusion that he wanted. Taking a canvas covered with a coat of white paint he printed the photo-derived silkscreen image in black ink. Then, painting by hand, he blocked out areas using seven different colors, thereby indicated hair, skin, eyes, eyelids, lips, dress, and the void surrounding the head. The canvas's white priming coat provided the color for the teeth. Finally, he screened the black portrait image on top of this colored background scheme.
We know from other works in the Marilyn series that Warhol relished a look of rough or hasty imperfection. Consider, for example, the jumpy interactions of the black, yellow, and peachy orange at the right side of Orange Marilyn; or the odd vertical streaking of the shadows on her cheeks and neck. Since the artist intended this series to be elegiac, he must have accepted the fact that such "accidents" of technique would trigger viewers to project an array of poetic interpretations. For example, might the grainy shadows and the misaligned edges allude to the damaging effects of fame or the tawdriness of the entertainment industry? On the other hand, the subject of Orange Marilyn asserts a radiant and disarming presence. This picture's neo-folk energy has affinities with the sacred icons Warhol knew during his early years of worship at the St. John Chrysostom Byzantine Catholic Church in the impoverished Pittsburgh neighborhood. The art historian Jane Dillenberger has observed: "Andy's earliest experience of art was of religious art--and it many not have been very good art, but unlike for many Protestants or those outside the churches whose experience of religious art may have been limited to museums, for Andy, art and religion were linked from a very early age." (Jane Daggett Dillenberger, The Religious Art of Andy Warhol, 1998).
Mr. and Mrs. Leo Castelli were the first owners of Orange Marilyn, and they lent the painting to the great 1970-71 retrospective of Warhol's work that was shown in the United States, Holland, France, and the United Kingdom. Writing in the British catalogue produced on that occasion Richard Morphet stressed the forcefulness of Warhol's work, arguing that it derived from the artist's adherence to "the simple acts of isolation, enlargement and choice of color." Morphet stated: "A single soup can painted so dispassionately has a hypnotic absurdity and presence. Given its isolation, such an object assumes a personality which one would never have dreamed of attributing to it. The image of Marilyn or Liz isolated on canvas becomes less pin-up than icon The dumbly undemonstrative character of Warhol's images, the 'frozen' inaction even of live and smiling people, points to the obsession with death which becomes marked in his work in 1962." (Warhol, Tate Gallery, London, 1971).
After Warhol died in 1987 the world quickly learned of the remarkable collections, hoards, and accumulations of things in his home and studio. Predictably there were numerous film stills and publicity photographs of Marilyn Monroe in his estate, and one hundred of them are illustrated in a catalogue published by the The Andy Warhol Museum, Pittsburgh (The Warhol Look, 1998). Accompanying the photographs is a great quote from Warhol's 1975 book, The Philosophy of Andy Warhol, which underscores his passionate belief in beauty as an inspirational force: "When a person is the beauty of their day, and their looks are really in style, and then times change and tastes change, and ten years go by, if they keep exactly their same look and don't change anything and take care of themselves, they'll still be a beauty." Warhol's Orange Marilyn keeps one such beauty alive and forever in style.

--Trevor Fairbrother is a free-lance curator and writer. He is Guest Curator of William Wegman: Funney/Strange, a traveling exhibition organized by the Addison Gallery of American Art, Phillips Academy, Andover, Massachusetts.

On occasion, Christie's has a direct financial interest in lots consigned for sale which may include guaranteeing a minimum price or making an advance to the consignor that is secured solely by consigned property. This is such a lot. This indicates both in cases where Christie's holds the financial interest on its own, and in cases where Christie's has financed all or a part of such interest through a third party. Such third parties generally benefit financially if a guaranteed lot is sold successfully and may incur a loss if the sale is not successful.