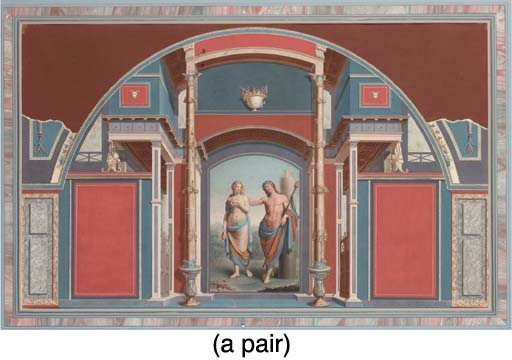 The Drunkenness of Hercules; and Bacchus and Ariadne,

Bought in Rome, by Jonas Brooke in 1784; by descent to The late Mrs. Helen Langford-Brooke, Mere Hall, Knutsford, Cheshire, Christie's London, 23 May 1994, lot 229. with Kenneth Neame Ltd., London, from whom purchased by the present owner.

Two centries ago the discovery of Roman wall-frescoes in the Villa Negroni on the Esquiline Hill, caused particular interest as the first of such decoration to be discovered in Rome since the excavations at Pompeii and Herculaneum. The finding of the Emperor Antoninus Pius' house in 1777 was made by Cavalier J.N.de Azara, Minister to Rome of Carlos 111 of Spain. The King's artist, Anton Raphael Mengs (d.1790) was employed to copy the frescoes for a publication instigated by the architect Camillo Buti; as they no longer survive it was fortunate that he specified that the copies should be made 'With the most scrupulous exactness..so that one can form an idea of the taste of the ancients in this type of mixed ornamental and figural painting'. Plans, descriptions of the 'antique rooms' and two of Angelo Campanella's hand-coloured engravings of the 'Arabische' frescoes, featured in the first part of his Manifesto, 1778. The twelfth plate was not published until 1802, and while Mengs completed the first three paintings, the remainder were executed by Anton von Maron, his brother-in-law. In 1778 the connoiesseur Frederick Augustus Hervey, 4th Earl of Bristol and Bishop of Derry (d.1803), contemplated the building of a villa 'Tusculum', inspired by the Villa Negroni, at his County Derry property, and involved in the scheme the architect Sir John Soane, who was then in Rome. Soane purchased some of the Buti plates, which were to influence the architecture of his own London house in Lincoln Inn's Fields, but it was the acquisition of the first eight plates for #2.8.0. at Christie's sale of the 1st May 1796, that served as vibrant wall-decoration in his Libary/Breakfast Parlour. They featured as lot 21: 'The paintings of a house of Antoninus Pius discovered in the villa Negroni, beautifully executed in colours on 8 sheets, by Camillo Buti', and were illustrated in an engraving of Soane's Parlour made in 1813. (see H. Joyce, ' Ancient Frescoes form the Villa Negroni', ArtBullitin, Sept. 1983, pp423-40.) The plates were as follows: pl.1 - Venus with putti. From same room as pl.111 pl.11 - Venus and wounded Adonis. From same room as pls.1V and X1 pl.111 - Venus and nymph with putti. From same room as pl.1. pl.1V - Adonis with Youth. From same room as pl.11 and X1 pl.V - Drunken Hercules Pl.V1 - Venus and Adonis. From same room as pl.1X pl.V11 - Bacchus and Ariadne. From same room as pls.V and X11 pl.V111- Minerva with trophy. pl.1X -Mars, Venus and Cupis; still life pl.X - Sacrificial scene attended by winged Victory pl.X1 - Adonis. From same room as pls.11 and 1V pl.X11 - Flute - playing satyr, Silene and bacchante. From same room as pls.V and V11.