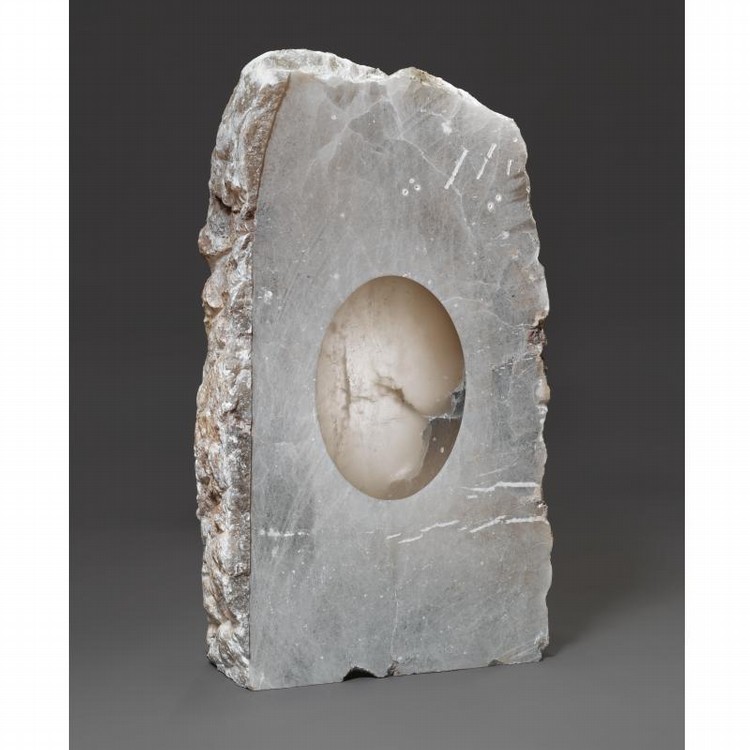 PROPERTY FROM THE VANTHOURNOUT COLLECTION

Galleria Massimo Minini, Brescia
Acquired by the present owner from the above in 2001

One of the first works in the Volterra series and also the largest, Untitled (1998) is Anish Kapoor's tribute to the luminous translucency of alabaster. Driven by the desire to create something in Italy, Kapoor, along with the eminent Italian dealer Massimo Minini, toured Brescia, Carrara and Volterra in a search for suitable materials. His destination in Volterra was the famous alabaster mines, which have been in use since the Etruscan period and are still a mainstay of the Tuscan economy. On arriving at the symbolic home of this ancient and celebrated material, Minini recalls, Kapoor was horrified to find that the noble alabaster, often used decoratively in churches and sacred ornaments, was being brutally chipped and chiseled down into ash trays, souvenirs and chess sets.

A fundamental respect for the nature of the material underlies Kapoor's sculpture, and Untitled (1998) still bears the rough edges of when it was extracted from the limestone sediment beneath Volterra. The front of the gypsum has been gently smoothed, but the impurities and veins are still visible in its surface, like the epidermis of a living creature, lending truth to the phrase "hewn from the living rock". The tiny crystals within the alabaster hold and disperse light, so that when the work is backlit, the deeply carved oculus glows like a vast jewel, as if some spiritual presence were trapped within Untitled's opalescent depths. The softness of the alabaster gives the work a poignancy and vulnerability, while the delicacy of the central concavity balances the monolithic weight of the whole. Kapoor's obeisance to the material, including the natural black lines and cracks in the stone that would be considered a flaw by other artists, contrasts with a millennia-old artistic impatience with impurities and natural "defects" in the material, whether marble, stone or alabaster. The story of how Michelangelo's David was carved from a single block of marble discarded for an imperfection by two other sculptors is famous. Michelangelo took advantage of this flaw in the marble and created a work which ironically has been lauded as an example of absolute perfection.

But the comparison can go no further, since Michelangelo was striving to create an image of physical and sculptural perfection that could rival classical marble figures, and embodied Renaissance cultivation and high art, but Kapoor speaks to us on a more primal, totemic and instinctual level, closer to the men and women who in honor of a forgotten deity dragged the vast bluestones of Stonehenge 240 kilometers and erected them where they stand today. Kapoor's avowed intention has been, in the words of Marco Livingstone, "to create shapes which are timeless in nature. This is not an opportunistic attitude but a profoundly religious one, for his goal is not to bypass the material world but to transcend it." (Exh. Cat., Liverpool, Walker Art Gallery, Anish Kapoor: Feeling into Form, 1983, p. 27). In Untitled (1998), Kapoor has created a masterpiece of astonishing beauty and spirituality -- centered on a void that is as enticing and mysterious as the infinity that lies in the darkness beyond Fontana's slashes: it is a monument that touches the eternal.