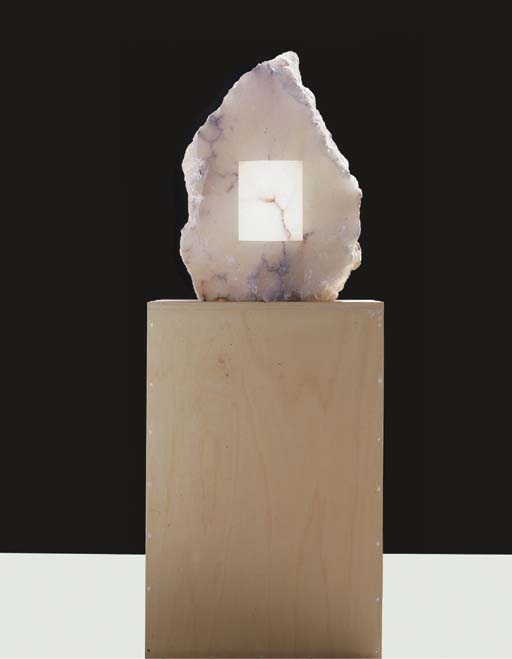 Arte Continua, San Gimignano.
Acquired from the above by the present owner in 1997.

This work is accompanied by a photo-certificate of authenticity signed by the artist.
"I believe very deeply that works of art, or let's say things in the world, not just works of art, can be truly made. If they are truly made, in the sense of possessing themselves, then they are beautiful. If they are not truly made, the eye is a very quick instrument... The idea of the truly made does not only have to do with truth. It has to do with the meeting of material and non-material... (A) thing exists in the world because it has a mythological, psychological and philosophical coherence. That is when a thing is truly made." (Anish Kapoor : Interview with Sherry Gaché, Sculpture February 1996, p. 22.)

This untitled work from 1997 is one of four alabaster sculptures that Kapoor executed for Arte all' Arte - an annual art festival held on this occasion in and around the town of San Gimignano in Italy. Carved from rough-hewn blocks of alabaster, the impressive works that Kapoor made for this show reflected the strong Italian tradition of stone carving and were displayed in the appropriate setting of the church of San Bartolo in the ancient Etruscan town of Volterra. The strong material quality of these works combined with their almost alchemical ability to transmute solid stone into light, formed a perfect conjunction with the architecture, space and light of the porticoes of the church's courtyard.

Using solid blocks of alabaster, deliberately left raw and roughly-hewn on one side and by contrast, smoothed flat to a fine shiny surface on the other, Kapoor has manipulated the material quality of the stone in a way that articulates its inherently variable nature. Carving a portal-like rectangle into the stone in such a way that the translucence of the alabaster is allowed to shine in the Italian sunlight, Kapoor actually fills the empty interior of the block with the non-material essence of light. This pregnant emptiness in turn generates a pervasive and mysterious sense of the void that lies inherent within all things - even, as this work demonstrates, at the heart of even the most dense and solid of materials such as stone. The basic principle of alchemy, (the transmutability of matter) along with much Hindu thinking and the discoveries of modern particle physics have also demonstrated the reality of such a void. It is a void that in many ways is at odds with our conventional Western perception of the world as a place of apparent Aristotelian solidity and cohesiveness, ultimately demonstrating this to be an illusion.

Kapoor's work articulates a deep sense of this void by expressing simply and directly the point where the material and the immaterial meet. This point is one that exists both within the object itself and also within the mind of the viewer. It also almost certainly exists in the mind of the artist at what Kapoor himself has described as the "very first moment of creativity". "The void is not silent," Kapoor has said, "I have always thought of it more and more as a transitional space, an in-between space. It's very much to do with time. I have always been interested as an artist in how one can somehow look again for that very first moment of creativity where everything is possible and nothing has actually happened. It's a space of becoming..."something" that dwells in the presence of the work... that allows it or forces it not to be what it states it is in the first instance." (Conversation between Anish Kappor and Homi. K. Bhabba, 1998, cited in Anish Kapoor, ex. cat. Hayward Gallery, London, 1998, pp. 35-36)

Kapoor articulates the void in this sculpture not through the mystery of colour, as in his pigment sculptures for example, but solely by using the translucent quality of the alabaster itself. In transforming stone into light and filling its hollowed out surface with it, he effectively enacts a work of alchemy actively demonstrating the transmutability of material and the symbiotic relationship that exists between material and space, solid and void. When using the rectangular hollow as here, Kapoor's use of the void is like that of a portal or window onto another way of seeing - one that highlights and gives voice to an active phenomenon inherent within the material itself. As Kapoor points out,"there is a history in the stone and through this simple device of excavating the stone it's just as if the whole narrative sequence is suddenly there...I'm trying to formulate a notion of a resident narrative. I'm not in the business of setting out to reveal, that doesn't interest me...at the end of the process... there occurs...a very technical thing and a very strange thing, all at once...It's the way in which the stone is not stone, the way the stone becomes something else, becomes light, becomes a proposition, becomes a lens..." (Conversation between Anish Kappor and Homi. K. Bhabba, 1998, cited in Anish Kapoor, ex. cat. Hayward Gallery, London, 1998, pp. 27- 29.)

Please note this piece was executed in 1997.