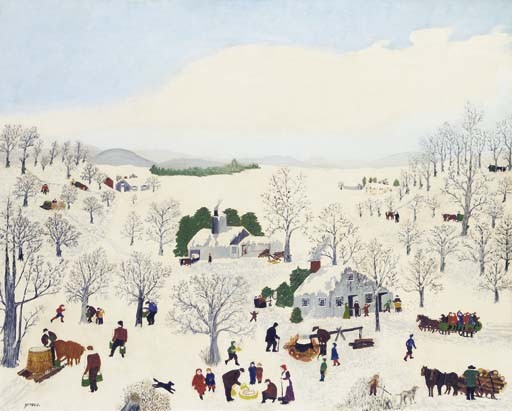 Property from the Estate of Cy Feuer

Celebrated Broadway producer, Cy Feuer, produced such famed musicals as Where's Charley, Guys & Dolls, Can-Can, The Boy Friend, Silk Stockings, How to Succeed in Business Without Really Trying and The Act. He also produced the film versions of Cabaret and A Chorus Line. Mr. Feuer's productions earned numerous Tony Awards, Oscars, Golden Globes and Pulitzer Prizes and was also honored with a Special Tony Award for Lifetime Achievement in the Theatre in 2003.

From 1989 to 2003, he was President and later Chairman of the League of American Theatres and Producers and in 2003, his autobiography, I Got the Show Right Here, was published. In the book, Mr. Feuer wrote of the relationships he had with such talents as George Abbott, Julie Andrews, George Balanchine, Abe Burrows, Bob Fosse, Lena Horne, George S. Kaufman, Michael Kidd, Frank Loesser, Liza Minnelli, Martin Scorsese, John Steinbeck and Cole Porter, who gifted the present painting by Grandma Moses, Sugaring Off, to Mr. Feuer.

In the article "Cole Porter Is 'The Top' Again," from January 16, 1948, a reporter from The New York Times describes his visit with Mr. Porter: "Cole Porter is a trim, slight man, groomed with subdued, elegant taste. The only bright touch in his get-up when he was visited a few days ago in his apartment on the forty-first floor of the Waldorf Towers was a white carnation. The most colorful thing in the room was a big painting by Grandma Moses, full of her naively gay whites and blues, which hung in a place of honor over the piano."

In fact, Porter was so fond of Grandma Moses' paintings that he referred to her in his lyrics for "Nobody's Chasing Me" in his 1950 Broadway musical, Out of This World. In turn, Grandma Moses boasted to reporters that she was "apaintin'" something special for Porter. "Know him? He's a song writer--a real good one too."

One of the largest and finest of Grandma Moses' expansive landscapes, Sugaring Off presents in elaborate narrative detail, a remembrance of life on a farm. As in all her best works, she includes in this painting many details of life in her rural community. The composition is populated with friends, families and neighbors all engaged in a common pursuit--the annual harvest of maple sugar.

While she worked in relative obscurity at the start, Grandma Moses' discovery came at a time when folk artists were beginning to receive broader attention. While living on her farm in upstate New York, Moses, a widow, decided to devote her spare time to painting. She gave her paintings to family and friends and showed them at fairs along with her jams and preserves. In the spring of 1938, her works were noticed by collector Louis Caldor in the window of a local drugstore. Caldor returned to New York City determined to introduce Moses to the art world. After two years of discouragement, Caldor finally captured the interest of Otto Kallir. Kallir later remembered one painting in particular, "It was a sugaring-off scene...But what struck me...was the way the artist handled the landscape...Though she had never heard of any rules of perspective, Mrs. Moses had achieved an impression of depth [with color]...creating a compelling truth and closeness to nature." (as quoted in K.A. Marling, Designs on the Heart: The Homemade Art of Grandma Moses, Cambridge, Massachusetts, 2006, pp. 126-27) Kallir wanted to see more.

In 1940, at the age of 80, Moses arrived in New York with her first exhibition, "What a Farm Wife Painted," at Kallir's Galerie St. Etienne. The magazine, Art News, commented that Moses' work had, "the freshness of some of the early folk paintings in this country." At the time, Grandma Moses was seen as a welcome respite to the reductive Modernist art of the day. One critic wrote, "When [Grandma Moses] paints something, you know right away what it is--you don't need to cock your head sideways like when you look at some modern dauber's effort and try to deduct [sic] if it is maybe a fricassee or sick oyster, or maybe an abscessed bicuspid, or just a plain hole in the ground." (as quoted in J. Kallir, Grandma Moses in the 21st Century, Alexandria, Virginia, 2001, p. 23) During a time of great patriotism after the nation's victory in World War II, Modern art was still seen as a European influence while Moses' paintings seemed wholly American.

It was at this debut show at Galerie St. Etienne that she was declared by a writer for the New York Daily Mirror to be "more than a great American artist. She's a great American housewife." Though jarring today, the writer's comment underscores an important element of her art. Moses' paintings reflected the American values and traditions that were cherished by American families, including Thanksgiving and Christmas, which were holidays mostly prepared by women. "Moses was proud of her women's work in general, aware that on the farm survival depended on a true division of labor between the sexes. As a girl she had learned the skills of female adulthood, and as a grown woman she practiced them with pride and proficiency. To the Gimbels [department store's annual Thanksgiving] forum she brought some of her prize-winning preserves and her home-baked bread. When called upon to talk, these were the items that dominated her remarks--not the paintings, which were, after all, just a hobby." (Designs on the Heart: The Homemade Art of Grandma Moses, p. 136)

Paintings such as Sugaring Off depicted Moses' belief that men, women and children all had a role in the daily work of the community. "Work and play were intimately connected in Moses' world view, but seldom were the two so closely combined as in her memories of 'sugaring off'. The artist's written account and depictions of this annual ritual stress the integration of children into the working life of the farm, whereby they learn early on to share in its burdens and pleasures." (Grandma Moses in the 21st Century, p. 142) According to Jane Kallir, "Of all Moses' favorite subjects, 'sugaring off' was the one she returned to most frequently. And like other recurring motifs, it combined lived experience with a venerable pictorial tradition. The process of tapping the maple trees in early spring to release the sap in order to make maple syrup and candy was familiar to the artist from early childhood." (Grandma Moses in the 21st Century, p. 134)

Sugaring Off shows her distinctive landscape style and her affection for this harvest which brought work and joy to the farm. In the snow-covered clearing, people are busy collecting sap from the trees and carrying it in large buckets to a kettle over a fire. Among the many vignettes in the landscape, children run around and wait for maple candy to be prepared while others, seated on top of a fir tree carried by a sleigh, squeal in delight as a sleigh full of fire wood is waiting to be unloaded. All of this frenetic activity is enhanced by her use of a pattern of bright colored blocks of shape. Moses said she painted joy in her palette, "because I wanted other people to be happy and gay at the things I painted with bright colors." (as quoted in J.E. Stein, "The White-Haired Girl: A Feminist Reading," Grandma Moses in the 21st Century, p. 50) In contrast to the cheery colors is the stark white background which further emphasizes this jewel-like intensity. Moses described the colors she used for her winter scenes, "And the snow--they tell me I should shade it more, or use more blue, but I have looked at the snow and looked at the snow, and I can see no blue, sometimes there is a little shadow of a tree, but that would be gray, instead of blue, as I see it." (as quoted in J. Kallir, Grandma Moses: The Art Behind the Myth, New York, 1982, p. 95)

In Sugaring Off, Moses uses texture to add depth. She paints with thick impasto to render the heavy snow on the trees and roofs and uses smooth brushstrokes for the pristine mountains and clouds. She layers the composition with the activity in the foreground receding to a quieter landscape in the distance, as a few men with oxen weave through the paths among the trees. Finally, an expansive vista opens to undulating mountains far in the background. By weaving the various vignettes throughout the landscape, the composition becomes cohesive. Although she had no formal training to learn about recession of space, she successfully achieves depth in the painting as the trees and figures gradually decrease in size. A reporter who met with Moses wrote in The New York Herald Tribune, "As Grandma Moses talked of the technique of painting, a curious look came over her face, and suddenly she was no longer a quaint figure nor [sic] a curiosity. For the look was the intense vision of the working artist, which has nothing to do with withered hands or age. In that swift glimpse the visitor could see that Grandma Moses, untaught, uneducated, with very little understanding of her own gifts, is a true artist." (as quoted in Grandma Moses: The Art Behind the Myth, p. 77)

Jean Cassou, the former director of the Musée National d'Art Moderne, wrote on Moses' one hundredth birthday: "The Primitives are the salt of the earth. Through their existence alone does contemporary art, so knowing, so sophisticated and daring, preserve in its depth sources of freshness and life. Thus the Cubists had at their side the Douanier Rousseau, and their marvelous intellectual speculations were counterbalanced by the companionship of this pure heart, inspired by the genius of the people and of nature. The United States through its 'avant-garde' is making the most daring aesthetic experiments, but also has its primeval forces, its springs of fresh water. From her small-town vantage point, the adorable Grandma Moses comes to the defense of the countryside, the empire of foliage and birds, and upholds the rights of nature. She would have us know that there is still a bit of paradise left on this earth and that may reach out as far as it will with its most advanced branches, because it is deeply rooted in the rich soil of Grandma Moses's garden." (O. Kallir, Grandma Moses, New York, 1973, p. 267) The idyllic Sugaring Off is a masterwork that manifests every element that has made Grandma Moses an American icon.

This work, painted on December 6, 1943, was assigned number 517 by the artist and entered in her record book on page 26.

The copyright for this picture is reserved to Grandma Moses Properties, Co., Inc., New York.