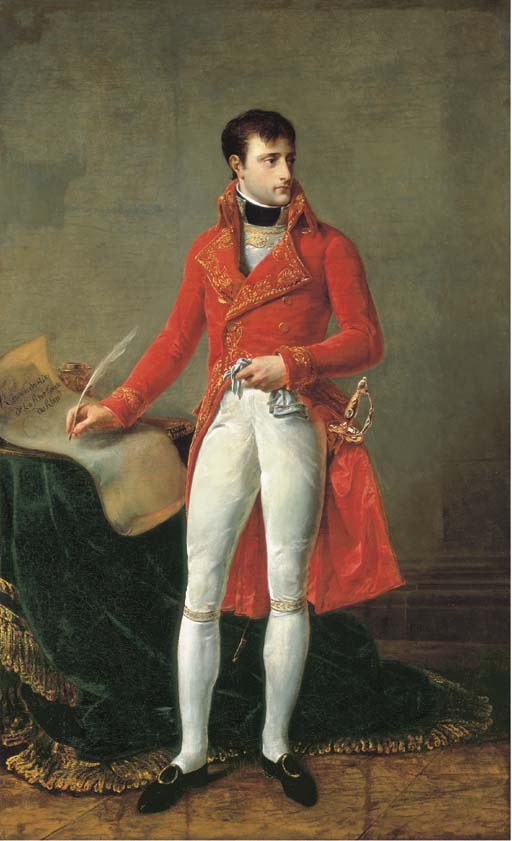 FROM THE COLLECTION OF THE DUC DE MOUCHY (LOT 110)

Since the eleventh century, the de Noailles family have played an important part in French political, military and religious life. Among its members have been Crusader Knights, four maréchaux de France - among which a Viceroy of Catalonia - a cardinal, bishops, ten ambassadors, grandees of Spain, French government ministers, and Knights of the Order of the Golden Fleece. Adrien-Maurice, duc de Noailles (1678-1766) was a maréchal and a minister of King Louis XV. The titles of duc de Mouchy and prince de Poix were bestowed upon his son, Philippe de Noailles (1715-1794), who was also made a Grandee of Spain for his military services to that country.

This imposing portrait, dated 'AN XI' (1803), shows Bonaparte wearing the half-civilian, half-military costume of Premier Consul, standing, looking to his left, his hand holding a quill that points to papers on a desk, that signal the general's recent achievements as a politician and peace-maker.

At his waist, discreet but clearly identifiable, is his sword decorated with the Régent, a celebrated diamond that had belonged to the French Kings since 1720. In 1802 Bonaparte had ordered the Régent to be set in the hilt of his sword which he carried at his coronation as Emperor of France two years later. Known as the Epée du Sacre, the sword is now in the Musée de Fontainebleau (see fig. 1). After Napoloeon's exile in 1812 the diamond was removed from the sword, and is today on display in the Galerie d'Apollon in the musée du Louvre (see I. Balfour, Famous Diamonds, London, 1997).

Between March 1802 and September 1803 Bonaparte commissioned from Gros a series of at least five official full-length portraits. These paintings were intended either as gifts for the First Consul's closest friends or to be sent to commemorate his latest successes in specific towns in the provinces (see E. Lilley, loc. cit.). Only two of these portraits have survived to this day: one, usually considered as the first of the group, given by Bonaparte to the Second Consul Cambacéres and today in the Musée de La Légion d'Honneur in Paris (oil on canvas, signed and dated 'AN X' [1802], fig. 2), and the present one. The former shows Napoleon with slightly longer hair than in the present lot, his coat lapels buttoned up, and the sword in a different position outside the coat. As for the others: a note from Bonaparte dated 1803 indicates that he ordered from Gros three portraits of Napoleon for the towns of Bordeaux, Lyon and Lille. These were probably destroyed by crowds during the political upheavals that followed the Emperor's reign.

Bonaparte had always admired the art of Gros. The latter had first met him in 1796, in Italy, when Bonaparte was still a young and ambitious commander-in-chief of the French army there. The impatient general, notoriously unwilling to sit for artists, accepted reluctantly to pose for Gros for his Bonaparte franchissant le Pont d'Arcole (which exists in two versions: in the musée du Louvre and in Versailles). When, by 1802, as First Consul and the most powerful man in France, Bonaparte was eager to develop his image throughout the nation, he naturally turned to the artist that had succeeded so spectacularly for him before. However, the general was unable to spare the time for the artist and Gros thus had to use as point de départ his earlier portraits - hence the strong resemblance in the face between the present picture and the Versailles and Louvre works.

In each of Gros' portraits of Napoleon as First Consul, details vary in the costume, the background (those intended for specific towns had views of the city in the background) and in the inscriptions on the papers: these referred to the latest successes or political treaties signed by Bonaparte. The present painting, dated 1803, was, according to de Mouchy family tradition, given to Général Moreau, who was Napoleon's close friend until 1804, when the Emperor sent him into exile.

The rise of Jean-Victor Moreau had been remarkable. After studying Law in Rennes, in 1791 he joined up with the Armée du Nord under Dumouriez, and just two years later was himself already a général de brigade, and by 1795 head of the Armée du Nord. He was given control of the Army of the Rhine and Moselle, and reached Munich victorious. He suffered defeat against Souvarov at Cassano in Italy, but later, in 1800, again as head of the Army of the Rhine, he won a decisive victory over the 100,000 men of Archduke John at Hohenlinden. The inscription on the papers on the desk in the present picture refer to the period of his greatest successes on the Eastern front, the '4 départments' being those of Mont-Tonnerre, Rhin-et-Moselle, Roer and Sarre, that Napoleon had incorporated into France in 1800 with Moreau as his leading general in this achievement, and in this way Napoleon can here be seen to be paying tribute to Moreau.

Moreau was popular, and partly because of this, as well as a longstanding rivalry between their wives' families, Napoleon started to distrust him, and he found himself (unfairly) accused of being associated with a Royalist plot and arrested in 1804, just a year after the present picture was executed. Spared from imprisonment at this trial, Napoleon nevertheless had him exiled and he left to farm in the United States of America. His military prowess was, however, called upon by Tsar Alexander in 1813, and he fought with Russia, Britain, Spain and Portugal in the coalition against his former leader Napoleon, becoming mortally wounded by a French bullet at the devastating Battle of Dresden in August of that year. He seems by his final words not to have regretted being removed from his equivocal position as a general in arms against his native country: 'Soyez tranquilles, messieurs; c'est mon sort'. Moreau was buried at St Petersburg; his wife received a pension from the Tsar and was given the rank of maréchale by King Louis XVIII.

Moreau was the great-grandfather of Madeleine Dubois de Courval (1870-1944), the wife of François de Noailles, prince de Poix, and the picture has since come down by direct descent to the latter's grandson, the present duc de Mouchy. Nicole Hubert has proposed (op. cit., p. 29, note 6) that the antagonism of the two generals would have made it unlikely that by 1803 (the year before his exile) Moreau would have wanted to own a portrait of his then rival, suggesting that it may have rather been painted for one of the new Rhenish chefs-lieux. Furthermore, it is possible that the inscription on the papers is not totally contemporaneous with the portrait - indeed it seems to cover an older inscription - scientific analysis may shed further light on this. Nevertheless, given the certainty of the later 19th Century provenance, the direct link of the Moreau and de Noailles families at that time, as well as the close - albeit uneasy - association of Napoleon and his general, Moreau's former ownership of the picture must remain more than a distinct possibility.

The 'Consular' portraits of Gros were so appreciated by Bonaparte that he ordered that they serve as models for other artists. Indeed in 1803, Vivant-Denon, who wanted to send portraits of Napoleon to other towns visited by the First Consul instructed five artists to 'exécuter chacun un portrait du Premier Consul d'après celui peint par le Citoyen Gros'. The chosen artists were Ingres (for Liège); Greuze (for Antwerp); Meynier (for Brussels); Mademoiselle Benoist (for Ghent) and Robert Lefevre (for Dunkerque).

Following his coronation as Emperor, depictions of Bonaparte changed dramatically: the somewhat romantic portrayal of a young, determined politician and man of action gave way to the solemn and regal personification of an almost divine power.