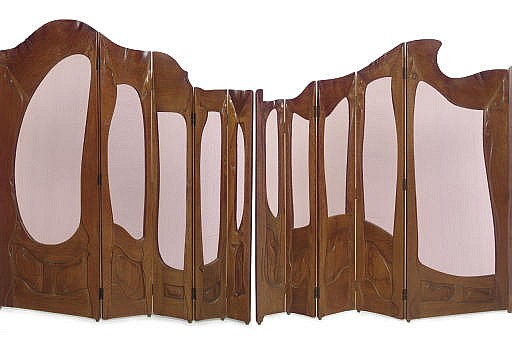 
This spectacular two-part screen was conceived by Gaudí as a part of the interior schemes for his last secular project, the 1909 apartment building that occupied a corner site on one of Barcelona's most prestigious avenues, the passeig de Gràcia. The commission was undertaken in 1906 at the invitation of the inspired patrons Pedro Milà i Camps and his wife Roser Segimon i Artells. The screen was intended specifically for their apartment. The Casa Milà - also known as La Pedrera (the stone quarry) because of the swell and recess effects of the facades - was the last great project that Gaudí completed. It is a remarkably inventive exercise in the sculpting of spaces and forms and the expressive power of Gaudí's visionary imagination in the Casa Milà has justly earned it the status of designation in 1984 as a World Heritage Site. The present screen perfectly encapsulates the spirit of this exceptional building. At the basis of Gaudí's concept for the Casa Milà was the principle of articulating the floor plans around two inner courtyards. These, like the inner and outer walls of the building were emphatically curvilinear, giving a powerful sense of organic mutability. But a key intention behind these courtyards was that they should allow a maximum penetration of light into and through the apartments.

The present two-part screen is designed - in the same vein as the architectural structure - as a contrast of masses and light-transmitting voids. The sculpted oak panels are pierced by the ever-changing free-form panes of frosted and rose-tinted glass that allow the passage of light, and this transparency contributes to the unexpected degree of delicacy within the overall effect. The shapes of the glass panes might be validly perceived as a lexicon of forms anticipating the abstract yet expressive motifs that would become a part of the language of avant-garde and surrealist art through the coming decades. Here is the morphology of Miró, Dalí and others. The oak panels of the screen sweep sensually in their silhouette and through their surfaces to create a sculpture - abstract, yet curiously biomorphic, fluid and as mysterious as if derived through a dream - that perfectly distils the essence of Antoni Gaudí's art.

Selections From The Allan Stone Collection