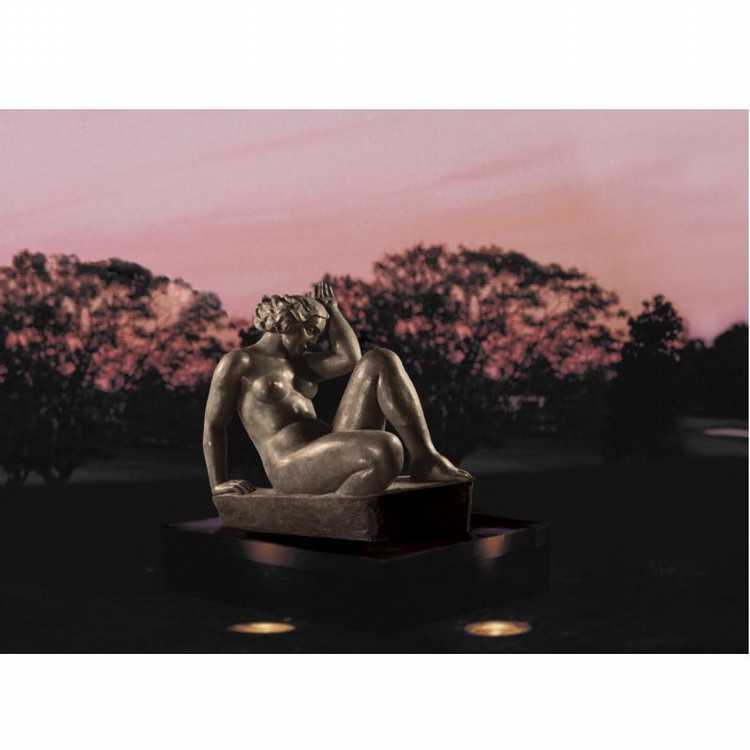 Inscribed A. MAILLOL, with the foundry mark Georges Rudier, Fondeur Paris and numbered 1/6

The authenticity of this work has kindly been confirmed by Mme Dina Vierny.

Acquired from the above by the present owner

La Montagne marks the culmination of Maillol's allegorical renditions of the seated female nude. His original idea for this form dates from the beginning of the century, when he completed his poetic La Nuit (see fig. 2) and the powerful La Méditerranée. Over the next several decades the artist's fascination with the grace and elegance of the seated figure never diminished, and he returned to this motif in the 1930s with La Montagne. The sheer size of this figure was a powerful aesthetic statement in these final years of Maillol's life and instigated his production of other impressive monumental sculptures, including L'Air (see fig. 3) and Monument à Cézanne.

Maillol's model for this sculpture was a young Russian woman named Dina Vierny, whose voluptuous physique bore a striking resemblence to the figures of Maillol's sculptures. Vierny began working with the artist in 1935, and La Montagne was one of the first major works modeled after her image (see fig. 4). Maillol rendered several preliminary sketches (see fig. 5) and four different studies for this sculpture, and ultimately arrived at the final composition in 1936. Bertrand Lorquin has written about the influence of Vierny on this work and the other sculptures Maillol created at the end of his life: "The appearance of this new model in Maillol's life brought about a renewal of his art and gave him the impetus to create the monumental sculptures of his final years. 'I began posing for large monumental drawings and for the carving of Nymphs,' remembers Dina Vierny. 'Next came The Mountain, for which he returned to the projects he had had at the beginning of his life, but with a certain change in the conceptions that determined his work. He wanted to complete the monuments he carried within himself and then come back to painting, which is in fact what he did'" (Bertrand Lorquin, Aristide Maillol, London, 1995, pp. 138-140).

In 1936, the Musée National d'Art Moderne commissioned the first monumental version of La Montagne in stone. Maillol began working on the plaster for this sculpture in 1936 in the large studio of his friend, Kees Van Dongen, whose brother Jean assisted him on his casting and stone carving. On December 21, 1936, the photographer Brassaï visited the artist at this studio, and photographed him while he worked on the giant plaster of La Montagne (see fig. 1). In Brassaï's remembrance of that day, he told of how the sculpture nearly collapsed and how Maillol succeeded in stabilizing his massive composition: "the weight of the material has caused La Montagne's left shoulder to begin to slip...Probably the iron armature has given way. Maillol is beside himself, and so is everyone else. Can the disaster be prevented; Van Dongen fetches some planks to shore up the weakened shoulder, while the sculptor tries to strengthen it with freshly mixed plaster. In the end, the sculpture is saved, and two hours later I managed to photograph it with Maillol looking like a midget beside the colossus" (Brassai, The Artists of my Life, London, 1982, p. 116).

La Montagne was cast by the Georges Rudier and Emile Godard foundries in an edition of 6 numbered casts, 4 artist's proofs and 2 estate casts. The present cast is one of the few remaining in private hands and other casts are in the following locations:

Fig. 4, Dina Vierny with one of Maillol's sculpture, circa 1937. Photograph by Brassaï

Fig. 1, The artist with the plaster cast, circa 1937. Photograph by Brassaï