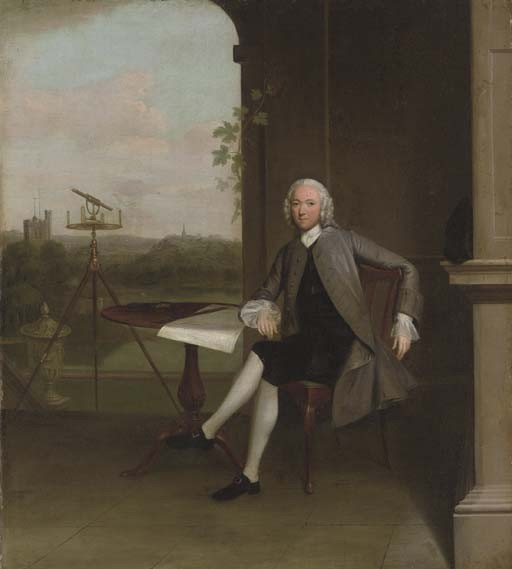 Portrait of Jonas Hanway, small full-length, seated at a table, beside a surveyor's theodolite and a classical urn, overlooking a landscape
oil on canvas laid on board
28 x 25 in. (71.1 x 63.5 cm)

Property from a Distinguished American Collection

Jonas Hanway, merchant and philanthropist, was the second of four children of Thomas Hanway (1671-1714), the navy's agent victualler in Portsmouth, and his wife, Mary Hoghen (c.1679-1755), widow of Stephen Worlidge. Jonas followed the lead of several members of his father's family, who had advanced in government service through careers in royal and merchant marines.

In 1729, Hanway was apprenticed to an English merchant in Lisbon and spent the next twelve years in the Portuguese capital. After a brief period in London, between 1741 and 1743, Jonas journeyed to St. Petersburg as a junior partner in the Russia Company. He was soon involved in launching an expedition to Persia, by way of the Caspian Sea, with the aim of exchanging English broad cloth for Persian silk, and the added mission of evaluating the potential of trans-Caspian trade with Persia, then ruled by the last great steppe conqueror, Shah Nadir Kuli Khan (1688-1747).

Hanway and his colleagues had overestimated both the security of the route and the potential for trade in this region. The party were ambushed between Langarud and Mashhad by rebellious Khyars, and Hanway had to flee in disguise along the southern shores of the Caspian, before being rescued by fellow merchants. The group were later partially compensated by Nadir Shah, who wished to maintain relations with Britain. On their return journey to St. Petersburg, the party suffered attacks from pirates, sickness and six weeks in quarantine, finally arriving in 1745. Hanway then spent five years in the Russian capital trying to recover his reputation and trade, before returning to Britain in 1750, via Germany and the Netherlands.

Hanway established his name in 1753 with the publication of his adventures in Russia and Persia in a four volume text entitled An Historical Account of the British Trade over the Caspian Sea. He began combining business with the Russia Company (until 1764) with philanthropic pursuits. His first major venture in this sphere was his role as Governor of the Foundling Hospital from May 1756. This position would have brought Hanway into contact with some of the leading artistic figures of the day, since William Hogarth had been one of the co-founders of this institution in 1741, and the Dilettante Society exhibited works there, including Sir Joshua Reynolds, Thomas Gainsborough and Francis Hayman.

The present portrait is likely to date to the 1750s. The altazimuth theodolite (a surveying instrument that measures vertical and horizontal angles) points to Hanway's scientific interests. This inclusion of attributes is characteristic of Devis's early portraits, for example: the inclusion of a telescope and globe in a portrait of Roger Hesketh with his Family, dated c.1742-3, highlight Hesketh's interests in astronomy and travel (by descent in the family to Roger Fleetwood Hesketh, Lancashire, by 1980; E.G. D'Oench, The Conversation Piece: Arthur Devis & His Contemporaries, Connecticut, 1980, p.84, no.75); and the presence of a telescope pointing out to sea in a portrait of Mr. and Mrs. Van Harthals and their Son, dated 1749, highlight the Dutch merchant Van Harthals' trading interests abroad. (The National Trust, Bearsted Collection, Upton House, Warwickshire, in 1983; E.G. D'Oench, op.cit., p.88, no.160).

Hanway entered government service in 1762 as one of the navy's victualling commissioners. He continued to support numerous charities, including the Stepney Society, designed to apprentice poor boys to marine trades; the Troop Society, to provide clothing and shoes to British soldiers in Germany and North America; and the Magdalen Hospital for Penitent Prostitutes. In addition, Hanway published eighty-five known works on a variety of subjects (six in multi-volumes and five in more than one edition) including: Virtue in Humble Life in 1774, designed to improve morals of servants; Defects of Police in 1775; Common Sense in 1775, advising American colonists to submit dutifully; Solitude in Imprisonment in 1776, concerning prison reform; and The Commemorative Sacrifice of Our Lord's Supper in 1777, reflecting his growing interest in religious and moral renewal. Most of the known portraits of the sitter date to this later period, including an oil dated 1779 by Edward Edwards (1738-1806) (Marine Society, London), and another dated 1785 by Northcote (1746-1831) (Private Collection, a version in the National Portrait Gallery). In 1788, Hanway was celebrated by a memorial in Westminster Abbey. He is also remembered for popularising the use of umbrellas in London.