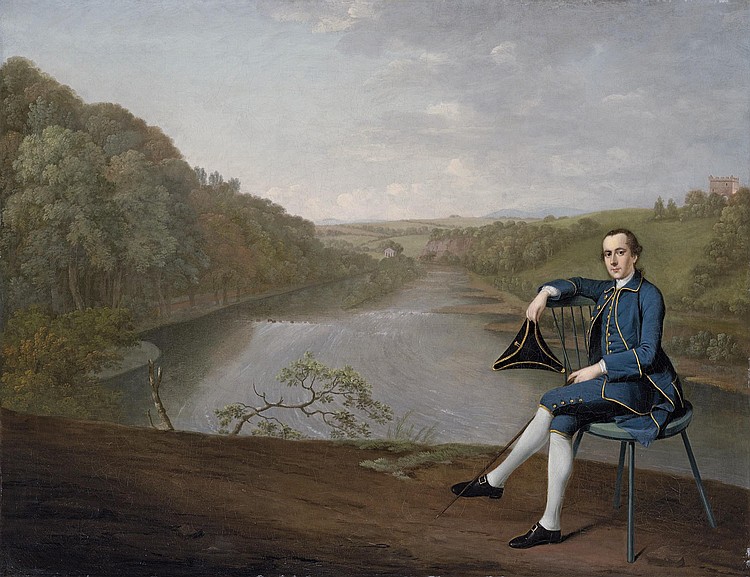 No VAT will be charged on the hammer price, but VAT at 17.5% will be added to the buyer's premium which is invoiced on a VAT inclusive basis.
Philip Howard (b. 1730) was the son of Thomas Howard of Corby Castle (1677-1740) and his second wife Barbara Musgrave, daughter of Sir Christopher Musgrave, 4th Bt., of Edenhall, Cumberland. He married Ann (d. 1794), eldest daughter of Henry Witham of Cliffe, Yorkshire, in 1754, with whom he had four children. His interests were for the most part scholarly but he was also a keen agricultural improver and he was responsible for the introduction of clover and artificial grasses into Cumberland.

Corby Castle, which stands above the River Eden, south-east of Carlisle, had been the seat of the Howard family since the early 17th Century. Philip Howard is portrayed sitting at the edge of the formal garden on the south front of the house. Beyond him the River Eden runs through the grounds of the house, which his father had layed out between 1708 and 1729 (see fig. 1). In the distance, on the left bank of the river, can be seen the Tempietta, with its doric portico, which marked the southern boundary of the formal garden layout. The long and narrow island in the centre of the river was originally constructed by the monks of Wetheral Priory, which lay on the west bank of the river opposite Corby, in order to facilitate catching the salmon for which the river was celebrated. The old Priory gatehouse which survived the Dissolution of the Monasteries, unlike the Priory itself, can be seen on the hill to the right of the composition.