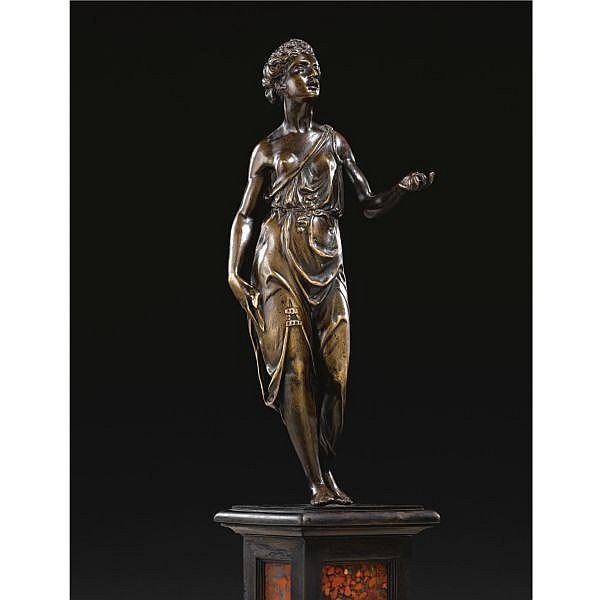 bronze, greenish-brown patina with traces of red, on wood base inset with red marble

Francesco da Sangallo was among the foremost sculptors of 16υth-century Renaissance Florence. San Gallo's style, however, stood in contrast to the classicism adopted by most of his contemporaries. He cultivated an atypical aesthetic, marked by physiognomic naturalism and emotional expressionism. His innovative sculpture, profoundly influenced by Donatello, anticipated Mannerism.

Sangallo was born into an established Florentine family of woodworkers and architects from whom he learned his trade. Francesco, unlike his other family members, fashioned his sculpture not only in wood, but also in marble and bronze. In the 1520s Francesco worked as an assistant to Michelangelo on the New Sacristy for San Lorenzo in Florence. He spent most of his career in Florence working for the Medici but also worked on commissions in Loreto, Naples and Rome.

The attribution of the Flora to Sangallo was first proposed by Claudio Pizzorusso in 2005 and supported by Francesco Ortenzi in 2006. This attribution is based exclusively on stylistic comparisons with large, marble statues, but indeed Flora is illustrative of Francesco da Sangallo's unique style. His subjects exhibit forceful and expressive facial features, marked by long necks with distinct musculature, pronounced upper lips, strong noses, and square jaws. As with the Flora, Sangallo often left his figures' mouths slightly open as if about to speak and in poses that challenge the contraposto position. Sangallo "deliberately created uncanonically proportioned figures." (Darr and Roisman, 1987). The Flora exhibits these distinct traits, which are also apparent on his St. John the Baptist (Museo Nazionale del Bargello, Florence, c. 1520 marble), Magdalene (1519, wood), and Virgin and Child with Saint Anne (OrSan Michele, Florence, 1522-26, Marble). Flora's physiognomy bears a striking comparison to the Madonna in Sangallo's earliest documented work. Flora and the Virgin both exhibit similarity in facial features as well as in their wavy coiffure, which falls over their ears in a similar upsweep and is adorned with like-placed garlands of flowers. The articulation of Flora's seemingly wet drapery which reveals the form of her body and falls in angular folds mirrors that on both St. Anne and the Virgin.

The St. John the Baptist shares not only facial similarities with the Flora, but presents the same muscular shape and pose of the right arm as well as the distinct angular position of a tensed right hand. Darr and Roisman write that the "bony protuberances forming the kneecaps of the Magdalen, the St. John, and the St. Anne is one of the most distinctive stylistic characteristics of Francesco's features."(Darr, 788) This motif is particularly evident on Flora's right knee. Sangallo continued to articulate knees in this manner throughout his career (note the tomb of Columba Ghezzi, marble, 1540).

Sangallo's work in bronze, however, is an under explored field, with no documentary evidence definitively linking any one bronze to the sculpture's oeuvre. We can, however, infer that Sangallo executed bronzes from his will of 24 September 1574 (Archivio de Stato di Firenze, Notarile Moderno, Protocollo 5083, fols. 2r-10v). The will, recently brought to light by Darr and Roismon, lists items of Sangallo's that are to be dispersed in the event of his death with proceeds to go to his wife, Maddalena. The will reads that "all sketches of sculpture or paintings or perspectives, or figures of bronze or antique marble figures or modern marble figures, or antique or wooden stone pieces, worked and not worked, and medal and statues of wood or architectural models" are to be sold. Only one other bronze has been attributed to the artist. A signed St. John the Baptist in the Frick Collection (1538) of which many copies exist (see: Pope-Hennessy, 1970, p. 63-4, also, another signed bronze sold in Treviso 14 October 2006, lot 96). This bronze is a rough casts with splintery drapery that mimics wood carving. They vary significantly from the present bronze Flora, which is reminiscent of the sculpture for which Sangallo is recognized.

European Sculpture and Works of Art