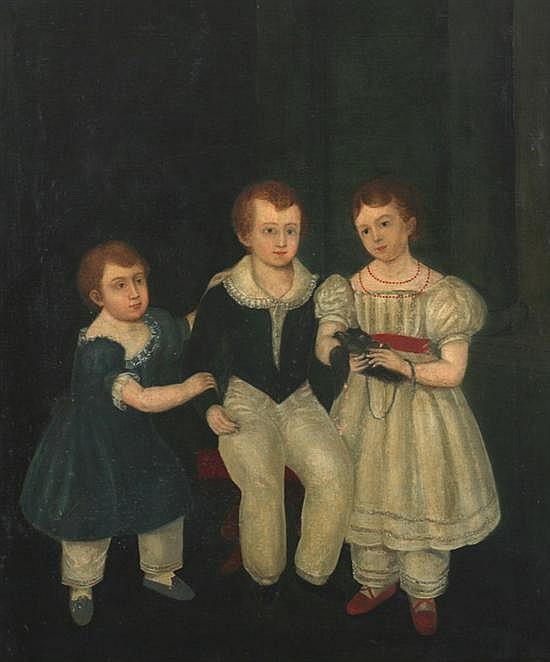 Old lining. Minor stretcher stress. Some minor craquelure. Scattered small losses in skirt, arm and dove of figure at right, in right proper knee of center boy, and in arm of boy at left. Darkened varnish and surface debris. UV: Heavy varnish marks in faces, chests and arms of figures and elsewhere.

The children depicted in this portrait are Clement, Walter Smith, and Elizabeth, the children of Clement Cox of Georgetown, Washington, DC, and Mary Ringgold of Chestertown, MD. Clement Cox Sr. (1803-1848) was the son of John Cox, Mayor of Georgetown from 1822 to 1845, and the nephew of Clement Smith, President of the Farmers and Mechanics Bank. He was Recorder of Georgetown, President of the Board of Aldermen and Recorder of the Circuit Court of the District of Columbia.

His oldest child, Walter Smith Cox, seated in the portrait on a mahogany stool between his siblings and wearing a dark jacket resplendent with brass buttons, succeeded to his father''s law practice and like his father, was Recorder of Georgetown, President of the Board of Aldermen as well as Auditor of the United States Supreme Court of the District of Columbia. He was appointed a Judge of that court in 1879 and presided at the trial of Charles J. Guiteau, the assassin of President Garfield. Little is known about his younger siblings.

J. Hall Pleasants, a Maryland scholar, published in 1940 the earliest study on Joshua Johnston, or Johnson. (Joshua Johnson was listed in Baltimore directories and census records as "Free Householder of color" and "Portrait Painter.") In 1955 J. Hall Pleasants attributed the Ringgold-Cox portrait to Joshua Johnston and dated it circa 1832. He commented on this portrait:
"Although Joshua Johnston appears frequently from 1796 to 1824 (inclusive) in the Baltimore directories as a portrait painter at various street addresses, there were frequent lapses during this period in which he disappears from the directories for a year or two at a time, probably because he was then an itinerant or perhaps a resident of the ''precincts'' of the city. In the past few years a few portraits by him have come to light in Maryland counties other than Baltimore County, such as Harford and Cecil counties, and on the Eastern Shore of Maryland, painted after 1824. This Cox group is the latest, 1832, so far found. It therefore appears that his painting period extends later than the writer once supposed. But so far no notice of the date of his death in any locality has turned up."
He continues, "The exact details of the early provenance of this painting are somewhat confused. If all the subjects are the three children of Clement Cox of Georgetown, it was doubtless painted there, but it was possibly painted in the Eastern Shore of Maryland when Clement Cox and his wife and first cousin, Mary Melvina Ringgold, were visiting the latter''s parents, Richard Ringgold and his wife, Elizabeth Smith, of Chestertown, Kent County, MD. The painting in question was hanging in the home of descendents of Honorable James Alfred Pearce and his second wife, Matilda Cox Ringgold…the Josias Ringgolds. The painting passed from the Josias Ringgolds to their daughter, Matilda Cox Ringgold, (Mrs. John M. Toulson), and from her to her daughter, Maude Ringgold Toulson (Mrs. Kenneth Seigworth). It was acquired from Mrs. Seigworth by Mrs. Seigworth''s father''s (John M. Toulson) brother, Dr. William Houston Toulson of Baltimore, who gave it to his daughter, Mrs. J. Edward Johnston (Helen Isabelle Toulson), its present (1955) owner." (J. Hall Pleasants, Studies in Maryland Painting, file # 3720, Maryland Historical Society, Baltimore, MD.)
Note: The house where the painting is believed to have hung in Chestertown, MD, is the Ringgold-Hynson House. Also owned by Honorable James A. Pearce, the house is now the property of Washington College, as the President''s House.