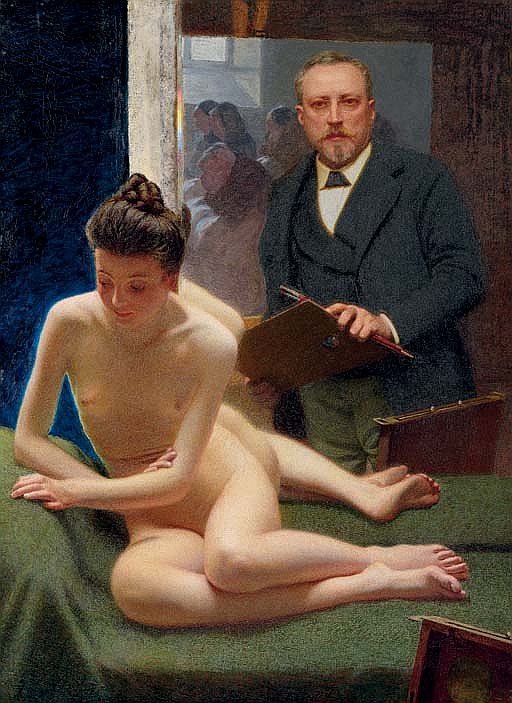 Autoritratto (The artist and his model reflected in a mirror)

Lot 155: Autoritratto (The artist and his model reflected in a mirror)


At once a deeply personal painting and a visual manifesto of Divisionism, Angelo Morbelli's Self-Portrait is one of the artist's masterpieces. The painting had a long genesis: the artist intended originally to exhibit it at the 1901 Venice Biennale, but the painting reflected in the background, La Sedia Vuota (The Empty Chair), was completed in 1903.

Morbelli referred to the painting in many of his letters to his great friend and fellow Divisionist, Giuseppe Pellizza da Volpedo. In the first of these, he wrote in February 1901:

"I will send to Venice - assuming of course that it is accepted (you never know) - my still unfinished self-portrait! Or rather I should say, I've barely yet begun it, and relegated myself to the background. In the foreground a nude! In short, it's just "un coin d'étude", but I'm calling it a self-portrait - strange perhaps - and something that the critics will get their teeth into for better or worse! - And I couldn't care less."

The critics never saw the work: Morbelli kept it hidden from the public eye throughout his life, failing even to show it at the exhibition of self-portraits organized in 1917 by the artist's society, Famiglia Artistica, of which he was a leading member. There is ground to speculate that Morbelli remained guarded about a painting which eventually took on very personal significance.

Literally reflecting the artist, his tools and his painted oeuvre, the painting is also profoundly allegorical and strikingly modern. It touches on the contrasts - later explored by surrealism and cubism - between reality and imagination and between object and representation. The device of mirroring a space into which the viewer would normally be stationed, whether as artist, sitter or interlocutor - has a rich tradition in art history, from Van Eyck's Arnolfini Wedding, through Velasquez's Las Meninas to Manet's Bar at the Folies Bergères.-(fig.1) But here Morbelli's use of perspective is much more complex, forcing the viewer to imagine himself in the artist's role, and drawing him into the latter's own closed world, whilst drawing attention to the very act of painting. While Cubism further developed Morbelli's fascination with visual conceptualization, not until Henri Matisse (fig. 2) are these concerns once again fused into such profoundly close-circuited and private works of art, and rarely on such a grand scale.

Overall, Morbelli's Self-Portrait is a maze of perception, which stands out for its complex manipulation of space; it is a permanent reflection of a fleeting moment, the illusory nature of which is reinforced by its complicated composition and perspective. The mirror itself is treated both as a physical object reflecting reality (the model, the artist and his tools) -- a fact reinforced by the reflections on the inside of the mirror frame - and as a gateway into a world of illusion. The viewer is made aware of six different planes: his own space and relationship to the painting, which is emphasized by the open paint box; the canvas itself, which has a profoundly textural element due to the technique used; the space occupied by the model; the mirror surface, reinforced by the chromatic reflection on the edge of the mirror frame; the painting in the background; and the background wall of the artist's studio.

In many ways, Morbelli's painting is profoundly surreal, forcing the viewer to question his relationship to the picture and of the objects within it to each other. The different elements of the painting combine to create an ambiguity that is both unsettling and at odds with what at first appears to be a straightforward self-portrait. For example, the window in the painting reflected in the background - a kind of window within a window - further leads the viewer inexorably towards another reality, and adds another layer of complexity to what is already a painting within a painting.

The theme of life and death is also explicit, with the three groups of figures (model, artist, and old women) receding from youth through middle to old age. The painting reflected in the background, La Sedia Vuota, (fig.3) shows a poignantly empty chair in a room occupied by elderly women, and was part of a series in which Morbelli explored the theme of death and old age, which preoccupied him throughout his career. The message is reinforced by the contrast between the artist and his young model, who is known from various photographs and sketches. Bathed in soft light, she is portrayed here as a docile muse, her shadowed face and curves contrasting with the erect and full-frontal pose of the older artist, who appears simultaneously to confront himself, the viewer and posterity.

More formally, the painting is a testament to Divisionism, a movement of which Morbelli (together with Giovanni Segantini, Pellizza da Volpedo, Gaetano Previati, Emilio Longoni and Vittore Grubicy) was a leading exponent. With its emphasis on the importance of the optical effects and the luminosity of colour, Italian Divisionism is often cited in the same breath as the French pointillist movement, although both developed independently of each other. Morbelli attests here to his Divisionist principles not only in his application of applying pure unmixed colours next to each other, even in the shaded areas - but also in his overt reference to the properties of light - for example the depiction of the component shades of the light spectrum reflected against the mirror frame, the intense blue shadows, and the aura around the model's torso, created by the light reflecting off the mirror behind her.

The present work has been requested for loan to the exhibition Seurat e Signac, to be held at the Palazzo Reale, Milan, 9 October 2008 - 21 January 2009.