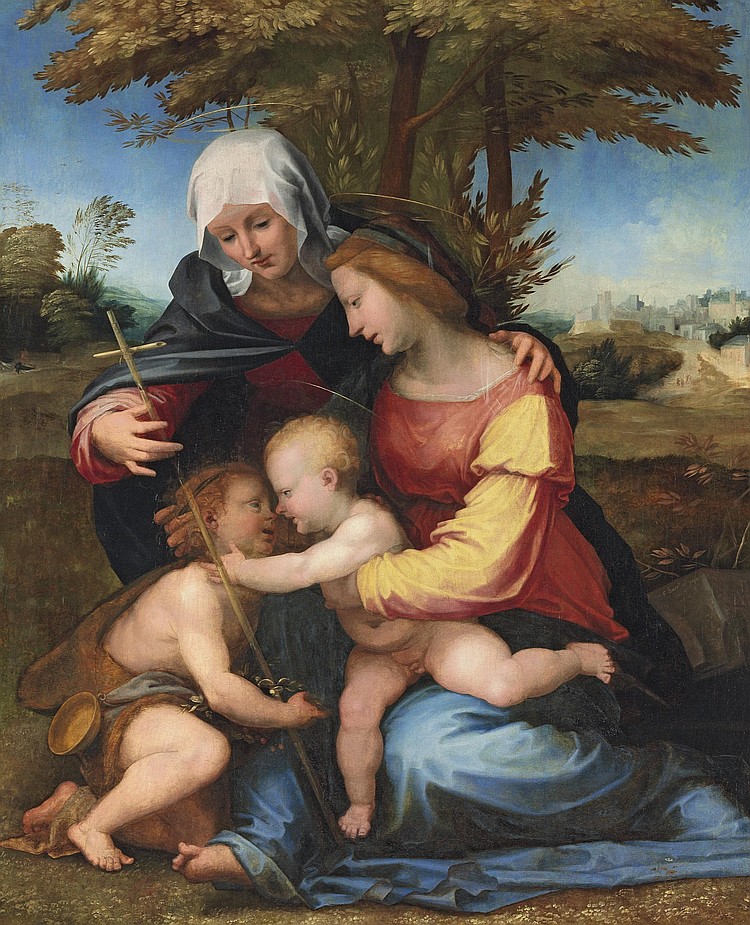 Property sold at the direction of Brenda, Lady Cook, formerly from the Cook Collection, Doughty House, Richmond
VAT rate of 5% is payable on hammer price and at 15% on the buyer's premium
This major late work by Fra Bartolommeo has been known since its publication in 1885 by the most perceptive of the nineteenth-century England connoisseurs of Italian Renaissance art, Sir Charles Robinson.
Baccio della Porta was, as Berenson was the first to realise, a pupil of Piero di Cosimo. But already in the mid-1490s he had developed a personal artistic vocabulary, which drew on the example of, among others, Leonardo, Botticelli, Perugino and Ghirlandaio, and placed him in the vanguard of Florentine taste, and thus ensured that he would be a formative influence on the young Raphael. In 1500 July the artist was received in the convent of San Domenico di Prato, taking the name Fra Bartolommeo. He only started to paint again in 1504, and this four year caesura in his career helps to explain the cerebral character in his subsequent production. His altarpieces are among the most subtle created in High Renaissance Florence, but he also supplied pictures of more domestic scale. A visit of 1513 to Rome introduced him to the developed style of Raphael and the achievements of Michelangelo, to which Fra Bartolommeo responded in the pictures of the ensuing period. Ill for much of 1514, he resumed work in earnest in 1515 and received commissions from a number of distinguished patrons, including the Duke of Urbino, In 1516 the Duke of Ferrara gave him the commission for a Feast of Venus for his Camerino. The artist failed to supply this - the Duke turned to Titian - and the considered quality of such pictures as this panel suggests that Fra Bartolommeo was much more interested in expressing his deeply-held religious convictions.

Fra Bartolommeo was an outstanding draftsman, and drawing was central to his creative process. Two sheets in an album in the Boymans-van Beuningen Museum at Rotterdam are directly related to this picture: both are of garzoni in the poses of the Virgin and Saint Elizabeth, and, in what is presumably the second, a draped stooping figure corresponding closely with the latter is also shown (Rotterdam, vol N, 53 verso and 51 verso, Fischer, loc. cit.). The pose of the Madonna was perhaps first explored in the sheet at Rotterdam (Vol N, 128, Fischer, pp. 309-11, no. 83), in which the positions of the legs and torso and right arm are already established, but the head is turned to the right, and the Child faces the Madonna.

The Cook picture - which Fischer characterised as 'enchanting' (op. cit., p. 310) and Padovani as 'stupenda' (op. cit., p. 14), is one of two signed variants of the design. The other, in the Galleria Corsini, Rome, measures 137 by 127 cm., and shows the Madonna and Holy Children in reverse, with Saint Joseph rather than Saint Elizabeth, in a very different landscape without the central tree. The evidence of the Rotterdam drawings, which shows how deliberately the artist expressed the human and spatial relationship between the Virgin and Saint Elizabeth suggest that the Cook panel may well have preceeded the Corsini picture. Two variants in the same sense as the Cook picture are widely considered to be by Fra Bartolommeo himself: Saint Joseph is added - on the right - to the composition in the smaller (102.5 by 90 cm.) and indubitably less successful panel in the Palazzo Pitti, Florence (see, most recently, S. Padovani, loc. cit.), in the yet smaller (88.3 by 71.1 cm.) and damaged panel in the National Gallery, London, no. 1694, the Virgin and children only are seen. Pentimenti in this support its claim to be autograph (see Gould, loc. cit).

That it was intended ab initio to replicate the design of the Cook picture is suggested by the existence of a highly finished chalk copy in the Uffizi, no 388 F (Berenson, 1903, no. 1778), characterised by Berenson as a 'very careful study' after the picture and attributed by him to Fra Paolino, Fra Bartolommeo's main assistant in his last years. A similar drawing by the same hand after the Corsini picture is also in the Uffizi (ibid., no. 1775). A drawing of the head of the Madonna at Berlin, no. 5080, is regarded by Gabelentz as a school work (op. cit., II, p. 24).

Given the fact that Fra Bartolommeo had a number of significant patrons outside Florence it is possible that the reference to the city in his signature - there is none in the inscription on the Corsini picture - may imply that the Cook picture was intended for one of these. The inclusion of the small representation of the Assassination of Saint Peter Martyr in the landscape on the left suggests that the artist's patron may have been a Dominican. The town on the right, so atmospherically observed, does not relate to any of the Frate's extant landscape drawings, but the plausibility of the view reflects his life-long interest in landscape expressed in, for example, the celebrated album from the Gabburri collection which was dispersed in 1957.

Sir Francis Cook formed one of the most important art collections of the 19th century. The son of a successful businessman, he began collecting with the purchase of a dozen or so Renaissance plaquettes during a youthful tour of Italy in 1840. It was not until 1868 however that his collecting of Old Master paintings began in earnest, when he acquired about thirty of the ninety or one hundred pictures from the collection of Sir Charles Robinson, who had recently lost his post at the South Kensington Museum. Robinson served as the catalyst to Francis's collecting instinct and would be his trusted advisor and dealer for the next thirty years, helping him form a collection that 'owed its strength to a good eye, not deep pockets' (see E. Danziger, op. cit, p. 449). After the death of his father in 1869, Francis became the head of Cook, Son, and Co., and by some accounts became one of the three richest men in England. 'Overnight', as Elon Danziger noted, 'he became one of the most voracious collectors in England: in 1876, just eight years after starting a picture collection, he owned 510 paintings. Many of his most inspired purchases date from this period of intense activity' (ibid., p. 448). These included masterpieces such as Velázquez' Old Woman Cooking Eggs (probably acquired c. 1870; Edinburgh, National Galleries of Scotland), Van Eyck's Three Marys at the Sepulchre (acquired c. 1872; Rotterdam, Museum Boymans van Beuningen), Fra Angelico and Filippo Lippi's Adoration of the Magi (acquired 1874; Washington, National Gallery of Art), Turner's Grand Junction Canal at Southall Mill (acquired c. 1874; private collection, England) and the present lot, which was acquired by 1875.