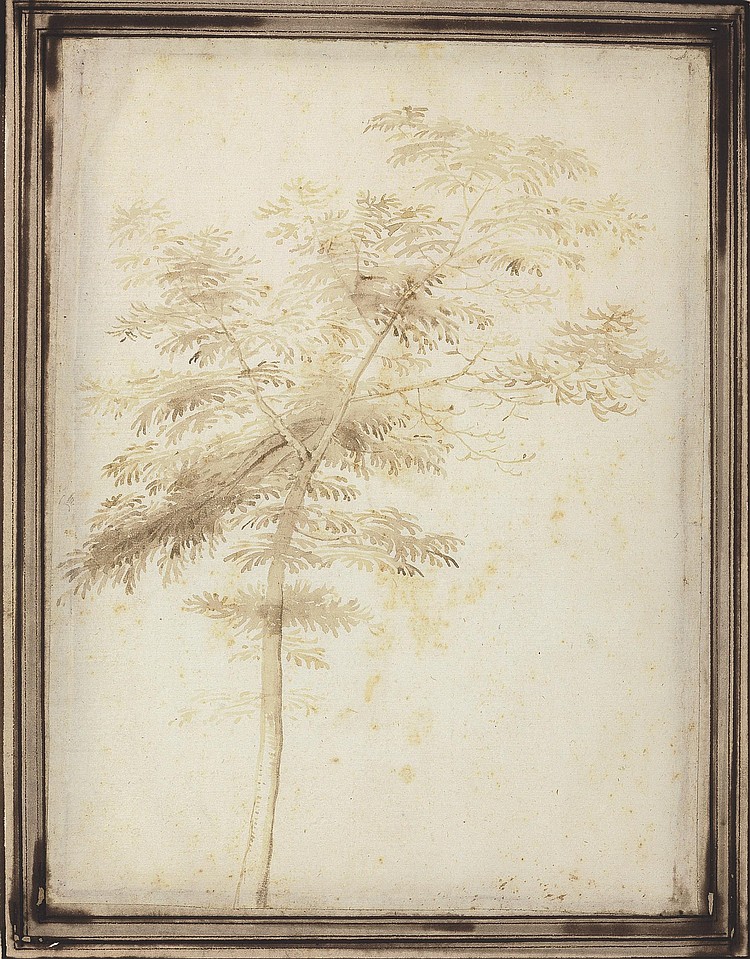 Inherited from the artist by Fra Paolino da Pistoia, by whom given to Suor Plautilla Nelli;
Convento di Santa Catarina, Florence, from which acquired by
Cavaliere Gabburri, by whom mounted in an album of landscape studies, and on whose mount it remains.
William Kent.
An unidentified English collection, where some of the companion drawings were copied by Robert Surtees of Mainsforth, County Durham, in 1768.
Anonymous sale; Sotheby's, London, 20 November, 1957, lot 15 (£1,200 to Hardy = Hatvany).
Baron Paul Hatvany; Christie's, London, 24 June 1980, lot 9; where purchased by the present owner.

VAT rate of 5% is payable on hammer price and at 17.5% on the buyer's premium.
Please note Payments and Collections will be unavailable on Monday 12th July 2010 due to a major update to the Client Accounting IT system. For further details please call +44 (0) 20 7839 9060 or e-mail [email protected]
This sheet was part of an album of 41 landscape drawings by Fra Bartolommeo, which appeared at auction in 1957 and was subsequently dispersed. Before the rediscovery of the album, which was last documented leaving an Italian collection in the mid-18th Century, Fra Bartolommeo's graphic output was thought to consist mostly of figurative and compositional studies. The emergence of the album broadened understanding of him as a draughtsman. Based on the album, his landscapes can be divided into townscapes, landscapes with convents, landscapes with cliffs, one copy after a landscape by Albrecht Dürer and, most importantly for the present case, studies of trees (Fra Bartolommeo: Master Draughtsman of the High Renaissance, exhib. cat., Museum Boymans-van Beuningen, Rotterdam, 1990. p. 375).

These lyrical drawings of trees were often executed in pen and brown ink, occasionally in brown wash, such as the present example (and also lot 16 in the 1957 sale) and, more rarely, in chalk. They seem to have been conceived as independent, exploratory studies, perhaps even done in situ around the Tuscan countryside. While some of the locations of the landscapes with buildings have been identified, the tree studies are devoid of topographical identifiers or atmospheric details. There are two studies of trees with a figure sitting on a rock, identified as Saint John the Baptist, in the Musée des Beaux-Arts, Orléans and in the Louvre, Paris (inv. RF 5558 verso). These are rare examples of a narrative element inserted into a landscape study, but even on these sheets the figures seem to be secondary in both scale and emphasis to the almost calligraphic unfurling of leaves and branches across the paper.

The landscape drawings are generally thought to have been executed between 1495 and 1509, when Fra Bartolommeo's use of pen and ink was most predominant and before his 1509 trip to Venice. The watermark on the present drawing is the same as that in four other drawings from the 1957 sale, as well as another document in Florence dated 1508 (Briquet 6664). The watermark is also found on a study of the Magdalen, which was used for a Pietà, a painting now in the Uffizi which was unfinished at the time of Fra Bartolommeo's death in 1517. As these drawings cannot be associated with any specific painting by the artist, it is difficult to date them more precisely.

Fra Bartolommeo was a prolific draughtsman. Over 1,000 drawings by him have come down to us today. Part of the reason for the relatively large number of extant drawings is due to the care with which his workshop handled his drawings in his lifetime and immediately after his death when Lorenzo di Credi made an inventory of 830 drawings and 12 sketchbooks in Fra Bartolommeo's studio. These drawings were bequeathed to his fellow monk and favourite pupil Fra Paolino da Pistoia (1488-1547), who then gave them to the artist and nun Suor Plautilla Nelli (1524-1588). She left them to her convent, Santa Catarina in Florence, from which Cavaliere Nicolò Gabburri (1676-1742) was said to have acquired a large number of Fra Bartolommeo's drawings at some point between 1725 and 1729. Gabburri, a collector and art historian who was one of the editors of Baldinucci's Notizie, assembled 500 of Fra Bartolommeo's figurative and compositional drawings in two albums which were eventually acquired by the Boymans-van Beuningen Museum in Rotterdam. The 41 landscape studies were mounted in a separate album by Gabburri, who did not think they were by Fra Bartolommeo, as indicated by the 1730 second frontispiece, which reads 'Raccolta di paesi e vedute dal vero originale di mano di Andrea del Sarto'. Carmen Gronau, in the 1957 Sotheby's sale catalogue, suggests that Gabburri, as the keeper of del Sarto's frescoes in SS. Annunziata in Florence, associated the landscapes in those frescoes with the drawings in this album. More significantly, it raises the question of whether the landscape drawings were acquired by Gabburri from a separate source or at least at a different time from the Rotterdam drawings. After Gabburri's death in 1742 his entire art collection, including all the Fra Bartolommeo drawings, were acquired by the English dealer William Kent (active 1742-1761). Thanks to three sketches dated 1768 by an amateur artist from Durham, Robert Surtees, we know the landscape album was still in England at this time and appears to have remained there until 1957. Despite the care with which Fra Bartolommeo's drawings were handled in the generation after his death, by the early 18th Century his pioneering achievements as a landscape artist had been largely forgotten and would remain so until the middle of the 20th Century.