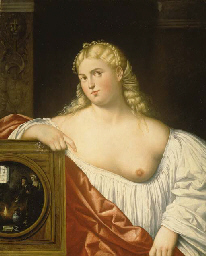 A courtesan with a mirror oil on panel 353/4 x 291/4 in. (91 x 74.5 cm.) in a Bolognese early 17th-century frame PROVENANCE Salamon collection, Sant'Alessio, Pavia. Private collection, France. LITERATURE L. Vertova, in I Pittori Bergamaschi dal XIII al XIX secolo: il Cinquecento, I, Bernardino Licinio, Bergamo, 1980, p. 433, no. 111 and p. 466, fig. 5. NOTES Bernardino Licinio was probably born in Venice from a family of Bergamask descent and received his artistic education in the circle of Giovanni Bellini and Giorgione. He was established as a portraitist as well as a painter of religious and mythological subjects. Vertova ( op. cit. p. 433) dates the Courtesan with a Mirror to the late 1530s on the basis of the background ornament and the subject's Raphaelesque hairstyle, but the picture may have been painted earlier. It seems close to Titian's work from the early 1520s, notably to the Allegory of Vanity in Munich, where a young woman is portrayed with a mirror in a similar pose, and to the Flora in the Uffizi, Florence, where the subject has similar cascading golden hair and pleated chemise. This type of theme was popular in Venice in this period and was taken up, for example, by Palma Vecchio and Titian. Vertova observes that the Courtesan develops the subject of the blonde Young Woman in the Ca d'Oro ( ibid., no. 22), dated to 1524, but that the sitter is more mature and worldly as in the Courtesan and Seducer, formerly in the Wimborne Collection, Canford Manor ( ibid., no. 24) dated by her to circa 1520. The motif of the reflection in the mirror derives ultimately from Van Eyck's Arnolfini Marriage in the National Gallery, London. In the present work the mirror shows the surface of the table on which it rests, with a comb and two vessels suitable for ointments or perfume. Behind, in an interior lit by a high window, there is a fire, which may symbolize carnal passion, and a man accompanied by a woman, perhaps a procuress, gestures towards the fire. Behind the courtesan herself, the wall is defined on the left by a pilaster decorated with a trophy hanging from the jaws of a lion's head mask which may serve to emphasize the predatory nature of the subject's profession.