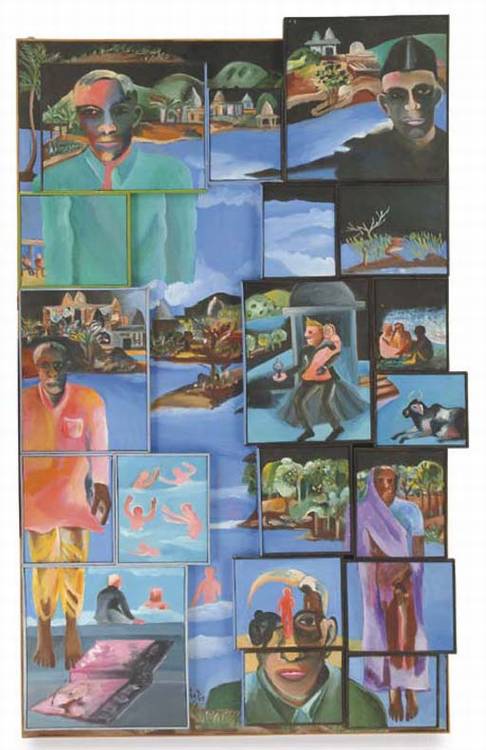 PROPERTY FROM THE COLLECTION OF BODHI ART

Bhupen Khakhar's paintings are marked by their strong narrative quality. The artist often draws from reality, recreating his observations of the urban middle class man and his surroundings with an acute attention to detail. This, according to Mala Marwah, "is one of the most outstanding features of Bhupen's work - the branch manager, striking workers, lone man, all belong to the surrounding in a manner that reiterates not only the popular belief but also the artist's own premise, that we are perhaps strongest when expressing the personal rather than when attempting a universal idiom." (M. Marwah, 'Notes on Four Artists: Vivan Sundaram, Nalini Malani, Gieve Patel, Bhupen Khakhar', Lalit Kala Contemporary 24-25, New Delhi, September 1977 - April 1978, p. 30.)

Having openly acknowledged his homosexuality in the early 1980's, Khakhar, in addition to documenting the life of the common man, sought to represent the marginalized gay community of India. Over the past two decades, the content of Khakhar's work grew progressively more explicit, with the artist often portraying himself in the nude as a means to present himself "exactly as he is, isolated yet part of a social complex." (E. Juncosa, 'The Integrative Art of Bhupen Khakhar', Bhupen Khakhar, National Gallery of Modern Art, Exhibition Catalogue, Mumbai, 2003, p. 18.)

The notion of the individual as part of a larger entity is further emphasized in this particular work. By dividing the canvas into several smaller picture planes, the artist comments on the divergent yet cohesive nature of society. Khakhar seeks not to bestow greater importance upon either the individual or society, but to highlight the relationship between man and his environment.