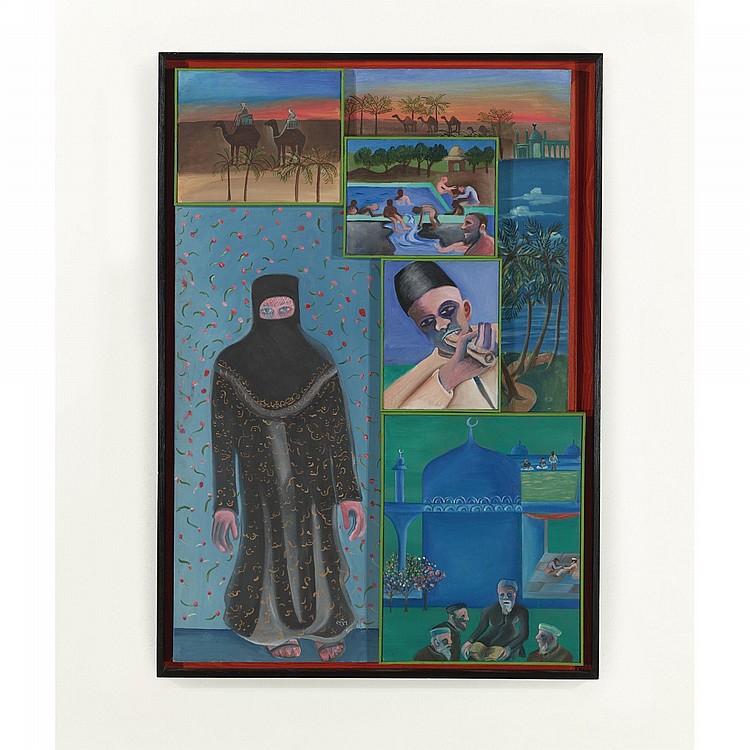 In 2002, Bhupen Khakar staged his first European retrospective at The Lowry Centre in Manchester. He used this exhibition to exhibit to "present 35 paintings [from the early 1960s to the present] with an emphasis on the works of the 1980s, including watercolors, ceramics, sketchbooks and dramatic large-scale oil paintings Khakhar produced [from 2000 – 2002]. His later paintings started to produce a narrative language, presenting complex, structured scenes exploring urban themes, showing incidents from daily life, places of work and worship – the street or marketplace. Khakhar's story telling always goes beyond pure representation with the introduction of imaginary elements." (Jon Pratty, "First Show in UK for Bhupen Khakhar at The Lowry," Culture 24, November 1, 2002).

Living and working between Baroda and Ahmedabad, and reacting to the escalating waves Hindu / Muslim violence in the state of Gujarat in the early 2000s, Khakhar created the series of the above-mentioned large-scale reactionary paintings, of which the current work is a part. "My interest is something which is around me," explains the artist, "something which is part of my life, the things that I see. Most artists don't do [similar] subjects as they are taboo, and I think, let me do it." ("Smashing India's Sexual Taboos," BBC News World Edition, October 29, 2002) Khakhar's sensitivity to the interreligious violence in Baroda – particularly in regard to the Muslim community – was likely an act of subaltern solidarity on behalf of the artist community.

In the late 1970s, after exhibiting domestically and abroad in biennales and group exhibitions, Khakhar was offered a teaching fellowship at Bath Academy of Art. During his stay in Britain, Khakhar became acquainted with such leading figures in the British Pop art movement such as David Hockney and Howard Hodgkin. It was the latter who helped Khakhar organize a solo exhibition at the Institute of Contemporary Arts, Bristol in 1979. Khakhar was strongly influenced by the work of these two artists, particularly David Hockney. Hockney's forthrightness about his sexuality encouraged Khakhar to embrace his own homosexuality, and explore homosexual themes in his work. For his boundary-pushing persona, Khakhar has been labeled an iconoclast, and the enfant terrible of Indian contemporary art.

Khakhar's treatment of the current work, presented in a narrative style, is reminiscent of the photo collage technique cultivated by David Hockney in the 1970s and 80s. Utilizing bright primary colors, comic book-style narrative form, multiple flattened planes, and detailed figurative study, Khakhar's later works unfold across the canvas and draw the eye left and right of the visual center, each snapshot lending itself to the greater theme of the work.