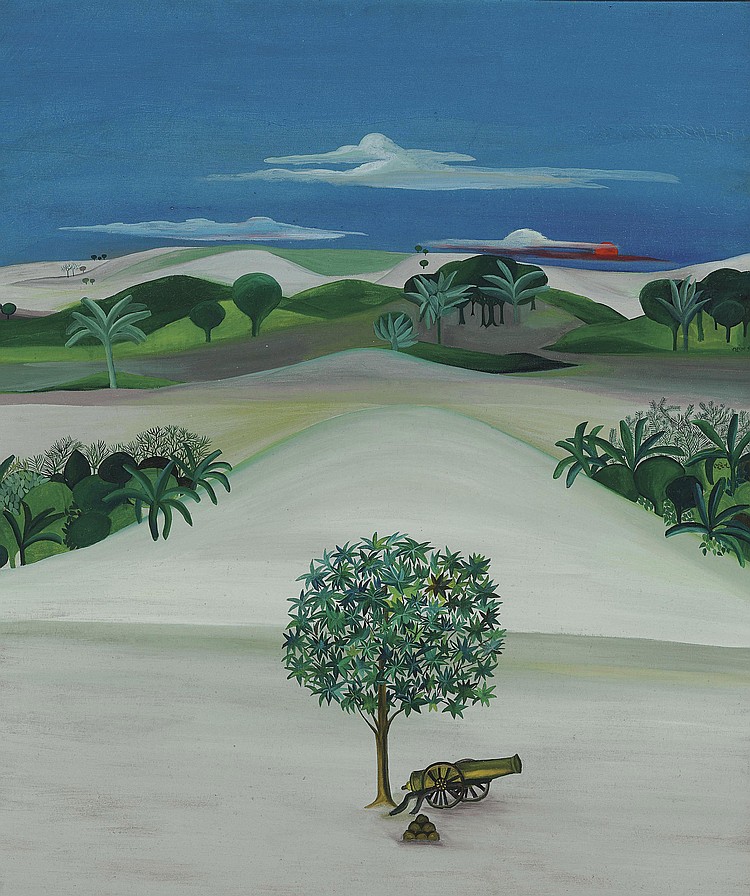 Christie's New York, 20 September 2000, lot 298
Acquired from the above by the present owner

Trained as a chartered accountant, Bhupen Khakhar was largely self-taught as a painter, whose artistic career did not begin in earnest until he was well into his thirties. "He arrived at a hybrid idiom, in which [Henri] Rousseau, [David] Hockney, Sienese pedellas, the oleographs of the Bazaar, the temple maps of Nathdwara and awkward observations of 'Company' painters, are all fused together. And with this idiom a new world opened, which no painter had ever dealt with before; the vast expanses of half-Westernised modern, urban India" (T. Hyman, A Critical Difference, Aberystwyth Arts Centre & The Showroom, London, 1993, p. 3)

In the late 1960s and 70s, Khakhar's themes centered around ordinary subjects pursuing their quotidian lives and professions. The works are initially purposefully restrained in style displaying a faux naivet and Primitivism that reference traditional textiles and pichhavais, while both celebrating and subverting tropes of Popular culture. According to G. Kapur, Khakhar's imagery contains "more wit than innocence in his perceptions Naivet for him is something of a stratagemThis may be regarded as the most serious defect of Bhupen's work. His innocence is too self-conscious." (G. Kapur, 'View from the Teashop,' Contemporary Indian Artists, New Delhi, 1978, p. 169)

The lush tree is frequently used as a symbol of fertility in Indian art, but normally a naked female form is to be found entwined amongst its branches. A yakshi standing under a tree is a recurring theme in both Hindu and Buddhist temple sculpture; however, in Khakhar's oil, the naked female is no longer present and is instead replaced by a cannon and cannon balls. The implicit male sexual imagery of the cannon primed to fire reveals the artist's own quiet wit that permeates much of his work. Homoeroticism takes on significant import in Khakhar's oeuvre post-1980 after life-altering events such as his extended stay in Europe and interaction with artists such as David Hockney and Sir Howard Hodgkin, and his mother's death which alleviated his concerns about opening up to his homosexuality. This particular work is a sly and early exploration of a theme that would come to dominate Khakhar's later body of work.