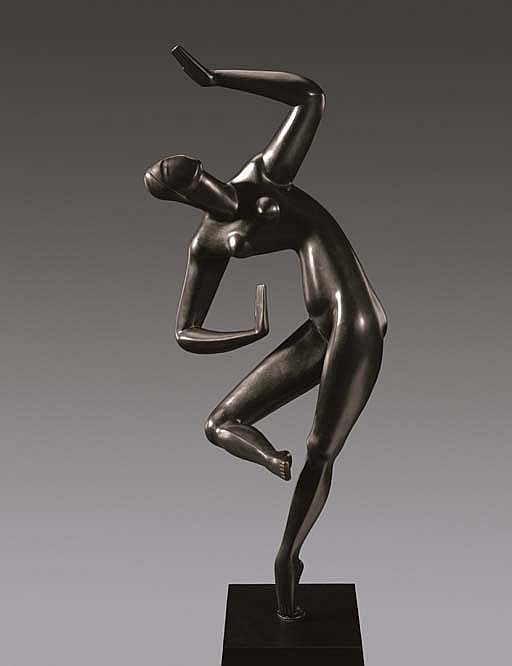 Archipenko sent four sculptures to the legendary 1913 Armory Show in New York, the exhibition that introduced America to modernism, and he was hard at work in his Montparnasse studio on his Red Dance, 1912-1913. Archipenko's work during these years often straddled the line between relief and free-standing sculpture. Under the influence of Cubist collage and Futurist sculpture, he began attaching painted plaster sculptures to two-dimensional backgrounds as a means of linking his sculptural forms to their environment and connecting sculpture with the picture plane of painting. Blue Dancer demonstrates how Archipenko simultaneously developed a new sculptural approach to illusion, solids and voids when sculpting in the round. As in the artist's The Boxers, 1914 (Milwaukee Art Museum), Archipenko often paired battling, or, more frequently, dancing figures that were meant to be seen from multiple viewpoints. These were staged as corporeal dialogues where the difference between the choreographed, even balletic movements of boxing and those of dancing is unclear. In sculptures of singular dancers such as Blue Dancer, the figure engages in a dialogue not with another dancer but with negative space--which Archipenko clearly emphasizes in the sculpture's serpentine form and multiple keyhole-like interpolations of solids and voids. Despite the work's title, many casts for this work are not blue, as Archipenko varied the patina he used throughout the edition. Some are gray, green or, in the case of the current sculpture, a lustrous black.

During this period many avant-garde artists drew inspiration from the dance renaissance heralded by the arrival in Paris of Serge Diaghilev's Ballet Russe. Influenced by Russian Cubo-Futurism as well as Italian Futurist performance, Diaghilev's staging brought the avant-garde to traditional dance, and took Paris by storm. He eventually collaborated with Picasso, LÃ©ger and a number of other Cubists including Robert and Sonia Delaunay. Such connections between the Eastern and Western avant-gardes were especially relevant to Archipenko as a Ukrainian emigrÃ©, and his sculptures of the dance in particular seem to have been influenced by Diaghilev's marriage of classical form and an avant-garde sensibility. For example, the human form in Blue Dancer is abstracted, but never deconstructed. Unlike his fellow cubist sculptor Ossip Zadkine--who had been inspired by primitive sculpture to carve rough--hewn and reductive human forms-Archipenko was consistently drawn to graceful, even lithe bodies.

The buoyant Blue Dancer also demonstrates the artist's fascination with the language of gesture, as used in ballet as well as in the cabaret, street performance, and dance-hall entertainments so popular in Paris at the time.

Writing in 1914, Guillaume Appollinaire heaped unreserved praise on Archipenko: "He has composed remembrances of one vision or another, one gesture or another. He has let his fancy, enriched by oriental imagery, create freely, while at the same time always remaining mindful of the instruction of his European masters, who have restrained him from falling into high-handedness and have bound him to them through well-assimilated knowledge and through dexterity never carried to excess. The art of the young Russian Archipenko who works in Paris, presses toward a new thing as yet unseen sculpture has hitherto been only a melody. The works of Archipenko are harmony--its first chords" (quoted in D. Karshan, Archipenko: International Visionary. Washington, D.C., 1969, pp. 13 -14).