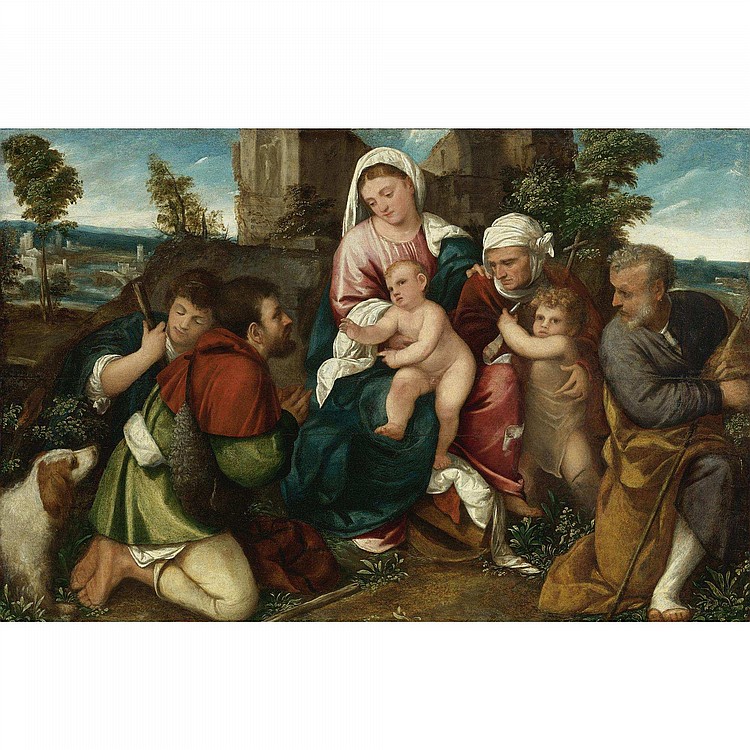 This is a beautiful example of Bonifazio's "sacre conversazioni" that were so popular in Venice in the 16th century and that were inspired by those of his teacher, Palma Vecchio (to whom, indeed, this panel has previously been attributed). Ultimately, however, it is to the examples of Titian, Giorgione and Giovanni Bellini that Bonifazio's works owe the greatest debt and, from these predecessors of his, Bonifazio appropriated the compositional symmetry and quiet, contemplative tone that characterise his mature works. His conversazioni are almost all built along the same compositional lines, with the holy family set before a tree or stone temple, flanked by saints and with an extensive Giorgionesque landscape diminishing into the distance on either side. In this way the present lot may be compared with the example in the collection of the Marquess of Lansdowne at Bowood (1) or that in the Palazzo Pitti, Florence. (2) Simonetti, who published the painting in her 1986 article on Bonifazio, in which she compiled a list of all his extant works, dated the picture to circa 1525-30.

PROVENANCE
During the 19th century this work was in the great 'Shandon' collection, put together by the Scottish marine engineer Robert Napier (1791-1876) at West Shandon, Garloch, Dumbartonshire. Napier began his career in Robert Stevenson's workshop, where Stevenson's 'Rocket' was built but it was in the development of marine engineering that he truly made his fame and fortune. He began collecting in the 1830s, acquiring a large amount of porcelain and delftware, silver, glass, bronzes, sculpture, watches, clocks, furniture and of course old and modern paintings. He lent generously to the great Art Treasures exhibition in Manchester in 1857 (including Rembrandt's Portrait of a young man in a turban) and amongst his other old masters were Philips Koninck's View over flat country (Ashmolean, Oxford) and Ercole de Roberti's Wife of Hasdrubal (Washington, National Gallery). His collection was sold the year after his death at Christie's for the astonishing sum of £49,778.