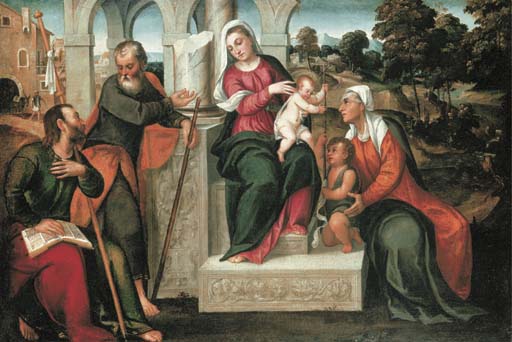 London, British Institution, 1857, no. 10, loaned by the Duke of Northumberland.

PROPERTY FROM THE COLLECTION OF DENYS SUTTON

Bonifazio de' Pitati was born in Verona but trained in Venice in the workshop of Palma Vecchio. His early compositions reveal the influence of his adopted city's High Renaissance masters, such as Giovanni Bellini, Giorgione and Titian. From Bellini, Bonifazio appropriated compositional symmetry and from Giorgione, a quiet, contemplative tone, both of which became trademarks of his mature style. Following Palma's death in 1528, his compositions became increasingly complex and dynamic, offsetting his master's harmonious idiom. Bonifazio's own Venetian workshop produced many gifted pupils who made their names in the following generation, including Jacopo Bassano.

The present composition is typical of Bonifazio's Sacra Conversazione pictures (for example, National Gallery, London; and Walters Art Gallery, Baltimore). The artist usually placed the Holy Family and accompanying saints out-of-doors before a sprawling Giorgionesque landscape populated by small figures performing daily tasks. Bonifazio's principal group - the enthroned Madonna and Christ Child - dominates all extant versions. However, the additional cast of hagiographic characters varies, depending on the demands of the patron. The present Sacra Conversazione unites the central group with the young Saint John the Baptist, Saint Elizabeth, Saint Joseph and a kneeling male saint.

The present work was owned by Algernon Percy, 4th Duke of Northumberland, who continued his ancestors century-old tradition of collecting Venetian Cinquecento painting. For example, Titian's celebrated Portrait of the Vendramin Family, painted in Venice in 1543-7 and subsequently owned by Anthony van Dyck, was purchased from the painter's estate in 1645 by the Duke of Northumberland, in whose family it remained until it was sold to the National Gallery, London, in 1929. A second work by Titian, The Portrait of Georges d'Armagnac and his Secretary, Guillaume Philandrier, also painted in Venice during d'Armagnac's role as French Ambassador to the city (1536-38), was documented in 1652 in the Northumberland Collection, where it remains today.