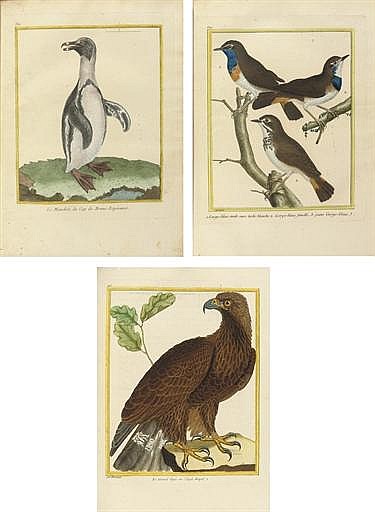 10 volumes, 4° (316 x 228mm). 973 hand-coloured plates after and by François Nicolas Martinet under the supervision of E.L. Daubenton. (Without the 35 additional plates of insects, spot to 564, crease mark to 609, caption to 159 corrected in ink in a contemporary hand, some light browning to text in vols. I and IV, text gathering 2F in vol. IX slightly spotted.) Contemporary calf, single foliate roll tool gilt border on sides, spines with red morocco lettering-pieces and small bird centrepieces, marbled endpapers (spines to vol. I and X cracking, joints rubbed, some head caps defective or repaired, some lettering-pieces lacking or defective, internal stitching broken with gatherings starting in vol. I, II, IV, VIII, IX and X). Provenance: George Savile Foljambe (bookplate).

ONE OF THE MOST IMPORTANT LANDMARKS IN THE HISTORY OF ORNITHOLOGY. In 1765 Daubenton the younger, at Buffon's instigation, commenced the publication of 1008 coloured engravings, 973 of birds, apparently to illustrate the 9 bird volumes forming part of Buffon's Histoire naturelle générale, which were published from 1770-1783. Without text other than the identifying captions, they were known as Daubenton's 'Planches Enlumines'. Owing to the limited number of coloured plates produced, it was not possible to issue them with the Histoire naturelle générale, and so a second set of 262 black-and-white illustrations were made for that work. Buffon then produced simultaneously in ten volumes the present special edition of the ornithology (issued in large quarto and folio formats) specifically to accommodate Daubenton's plates. Buffon described the present format as 'petit in-folio avec les planches enlumines, petit papier'. He was aided in writing the text by Philibert Gueneau de Montbeillard and l'Abbé Bexon. As often, the 35 supplementary plates of insects are not present; they are not referred to in the text or plate lists. Nissen IVB 158; Zimmer 104-6. (10)