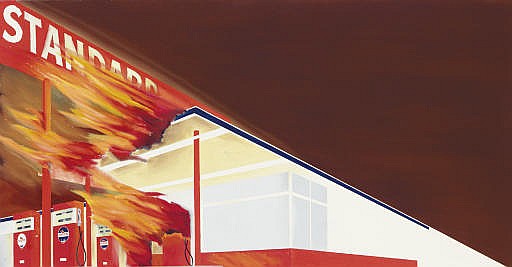 On occasion, Christie's has a direct financial interest in lots consigned for sale which may include guaranteeing a minimum price or making an advance to the consignor that is secured solely by consigned property. This is such a lot. This indicates both in cases where Christie's holds the financial interest on its own, and in cases where Christie's has financed all or a part of such interest through a third party. Such third parties generally benefit financially if a guaranteed lot is sold successfully and may incur a loss if the sale is not successful.
One of Ed Ruscha's most arresting paintings, Burning Gas Station presents a vivid paradox to the viewer -- the cool and restrained lines of the artist's iconic gas station have given way to searing flames that flicker against the building's hard edges. An outstanding example from Ruscha's formative period in the mid-1960s, the tension that the artist builds in this composition is acute yet also mysterious. Ruscha engulfs in flames a subject that had become an important hallmark of his distinguished career, directing a seemingly iconoclastic impulse against his own art while creating a newly fascinating image.

The gas station has played an especially significant role in Ruscha's distinctive iconography over the course of four decades, yet Burning Gas Station is a rare example of a painting dedicated to the subject, with most of the remaining examples in museum collections. Referring to the first painted iteration, Standard Station, Amarillo, Texas of 1963, Ruscha insisted that "It has to be called an icon; that's the main thing about that painting. It sort of aggrandizes itself before your eyes. It became a motif for me to explore in other ways, too" (Ruscha, quoted in E. Ruscha, Leave Any Information at the Signal , Cambridge, 2002, p. 158).

Ruscha based these and a number of other paintings on a photograph that he had taken in 1962 for his first book, Twentysix Gasoline Stations . This highly influential book chronicled buildings that he encountered along Route 66, a terrain that he frequently traveled, as it connected his childhood home in Oklahoma to Los Angeles, where he had moved in 1956 to attend art school. Reproduced in a dead-pan manner, the stark black and white images are virtually devoid of human presence. Organizing the images serially, and accompanied with only the name and location of each station, Ruscha shifted the importance to the formal and conceptual aspects of the project. At the same time, the images distill the character of these man-made additions to the distinctively Western landscape, which Ruscha distilled even further in his painted versions of the Standard station.

Working from his photographic source, Ruscha exaggerated the sharp angles and unflappable solidity of the gas station. Positioned on the brink between realism and abstraction, the foreground resembles a Mondrian composition displaced onto an anonymous American building. In discussing pictorial construction, Ruscha emphasized, "The diagonal comes out of the idea of motion and speed, as well as perspective. When you divide the canvas like that you always have the suggestion of speed and depth." The oblique thrust of the composition and dramatic vanishing point suggest the form of a deserted highway disappearing into horizon, capturing a sense of speed on the open road. Indeed, the inferred vantage point for his images of gas stations was always the automobile, and as Ruscha professed, "I saw [the gas station] as a comic comment on the idea of speed and motion in a picture."

Ruscha's hard lines and choice of seemingly banal scenes that anyone could encounter along the roadside was a pointed riposte to the precepts of artistic mastery that had dominated the art world under the reign of the Abstract Expressionists through the 1950s. Starting out by painting in the style of de Kooning and Kline while at the Chouinard Art Institute (now California Institute of the Arts), Ruscha soon came under the sway of Jasper Johns and Robert Rauschenberg's artistic provocations when he encountered printed reproductions of their work in 1957. Their vision of art-making was a revelation for Ruscha, who saw in Johns and Rauschenberg a groundbreaking endorsement of the kind of popular and commercial sources that he had already been drawn to. Frequenting the influential Ferus Gallery from the late 1950s, Ruscha was on the scene when Warhol made his landmark debut there in the Summer of 1962, perplexing his audience with his Campbell's soup cans. He was also on hand when the Duchamp retrospective curated by Walter Hopps brought his readymades and other agents provocateurs to the Pasadena Art Museum in Fall 1963. Ruscha quickly became part of the revolution in painting and sculpture that was to become known as the Pop movement, and was included in the 1962 "New Painting of Common Objects" exhibition at the Pasadena Art Museum (the first show to assemble Pop artists), as well as the "Pop USA" show at the Oakland Art Museum in 1963, and had his first solo show at the Ferus Gallery that year. As Ruscha recalled, "I felt a great kinship with Andy [Warhol] and Roy Lichtenstein because it was like a logical departure from the kind of painting that was happening at the time" (E. Ruscha, quoted in Ibid. , p. 138).

The artists Ruscha admired, such as Johns, Warhol, Lichtenstein and Duchamp, each laced their art with a strong sense of wit, which also became one of the hallmarks of Ruscha's own oeuvre . "Absurdity and paradox had real meaning for me as an artist," Ruscha has tellingly divulged. Such is the tone of his one of his most notorious compositions, Los Angeles County Museum of Art on Fire (Hirschorn Museum), which shares important connections to its fiery predecessor, Burning Gas Sation , as well as the 1964 book that Ruscha produced titled Various Small Fires and Milk . After viewing the new building from a helicopter, Ruscha recounted, "I knew at the time that I started the picture that I was going to assault that building somehow" (E. Ruscha, quoted in Ibid , p. 45). Both paintings take subjects that have hallowed cultural associations and send them up in flames -- in the case of Burning Gas Station , one of Edward Hopper's quiet meditations on the modernism of America seems to have suddenly combusted. The uncanny effect of the painting recalls in certain ways Magritte's images of mundane objects set aflame, cast in Ruscha's unmistakable mold that is shaped by the sensibility of the wide-open and sprawling Los Angeles landscape.

Ruscha ventures toward a zero degree of painting in some parts of the canvas, where faint traces of pencil taper off into the white surface of the canvas-- yet the rigid geometry thus delineated seems to exert a pressure that cannot be contained and thus implodes in expressive flames. Traces of the Abstract Expressionist style that he had emulated in his early days and then repressed seem to return in the form of these bright flames, which appear to burn through the canvas rather than the building itself. Likewise, the smoldering sky could almost be one of the liminal spaces of Rothko's emotive color field painting, and the line that divides the canvas diagonally could be one of Barnett Newman's zips turned askew.

Famous for his pioneering use of individual words as the focus of pared-down yet slyly complex compositions, text also plays a central role in Burning Gas Station . The word "Standard" is licked by flames, perhaps subconsciously insinuating a revolt against all the oppressions of normalcy -- a fitting gesture for a member of a new generation of innovative artists. Ruscha mulled over the possibility of meanings hiding behind the fa/gcades of his compositions: "I'm recalling this statement that Dave Hickey made about a Standard Station painting that I made, and then another painting that I did of a restaurant on La Cienega, called Norm's La Cienega on Fire . He saw those two paintings as making the same sort of statement, like standard is also a 'Norm' -- normal. The strain of that is totally unintentional to me but, nevertheless, it makes me wonder about my intentions at the time. Maybe there was some inexplicable, invisible strain which goes through me which makes me put things down as I do" (E. Ruscha, quoted in Ibid. , p. 153).