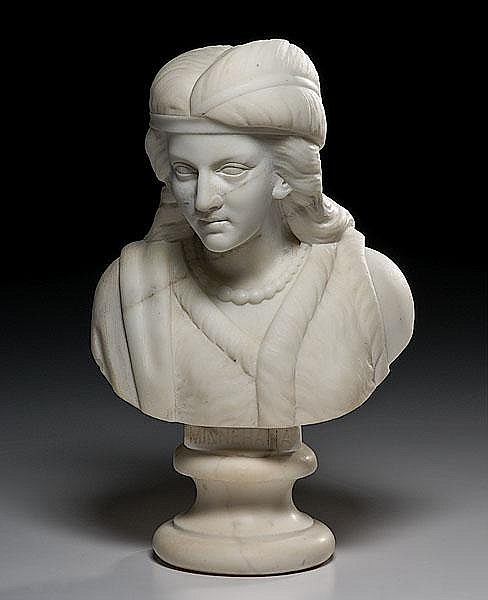 marble bust atop marble base, standing 11.625" high. With Minnehaha inscribed between figure and base, and Edmonia Lewis/ Fecit A Roma/ 1868 on reverse side. Containing illegible pencil numbered incription on side of base (possibly an accession number).

Born near Albany, New York, (Mary) Edmonia Lewis (ca. 1842 - after 1909) was the daughter of an Ojibway mother and a black, West Indian, father. Following studies at New York Central College in McGrawville, and at Oberlin College, she arrived in Boston, Massachusetts, in early 1863. There, under the patronage of abolitionists Lydia Maria Child, William Cooper Nell, and William Lloyd Garrison, she studied with the sculptor Edward Brackett.

Lewis rented space in the Studio Building in downtown Boston and quickly established herself as an artist on the rise, specializing in plaster and marble portrait busts and medallions. Her reputation was enhanced by the success of her bust of the fallen Brahmin Civil War hero, Robert Gould Shaw. With funds from the sale of copies of that work and of other pieces, she sailed for Europe in the summer of 1865. Following a stay in Florence, Lewis settled in Rome where she lived for the rest of her professional life, making frequent trips to the United States to exhibit and sell her work and to garner new commissions.

Lewis's Roman studio was listed along with those of other major artists of the day in all of the best guidebooks. Her career was followed closely by the American and European press, and she quickly became the first non-white American to gain an international reputation as a sculptor. Along with portrait busts of friends and public figures, her more ambitious early work referenced her dual heritage with themes of black emancipation and of Native American life and lore. In the latter instance she produced a body of work based upon Henry Wadsworth Longfellow's epic poem, The Song of Hiawatha (1855), the single best-selling poem in the English language of the entire 19th-century. Savvy collectors and curious tourists alike flocked to Lewis's studio to purchase this work with its added cachet of coming from the hand of an artist who was herself part Indian.

It was not uncommon for sculptors of successful larger works to excerpt a detail of such pieces in the form of a bust sold independently; most notably, Hiram Powers' Greek Slave was offered in both versions. Given her friendship with Powers, Lewis would have recognized the wisdom of that practice. Her elaborate group, The Old Arrowmaker and His Daughter (also known as The Wooing of Hiawatha), and the standing couple in her Marriage of Hiawatha, provided the models for her busts of Minnehaha and Hiawatha with the subject's name inscribed on the lower front atop the base. To date there are five known signed and dated copies of Lewis's Minnehaha bust housed in public and private collections. This previously unknown example adds another to that number.

The mythic love story of Hiawatha and Minnehaha was well known. Still, in depicting the Indian maiden, Lewis walked a cautious line between creating a chaste child of the forest and perpetuating stereotypes of morally naïve savages. While Minnehaha wears an animal pelt, unlike the conventional depictions of such clothing at that period, often draped over one shoulder with an exposed breast emphasizing a partially clothed life in the wild, hers is fashioned into a modest garment accented with graduated beads at her neck.

Lewis's characteristic interest in the play of pattern and texture is evident in the pelt bodice framed on one side by the smooth flesh of a bare shoulder, and on the other by the weight and folds of the fabric of the blanket draped across the opposite shoulder. The beads suggest worked stone or bone; the headband is likely a strip of leather. They pose a contrast to the softness of the billowing flow of wavy hair and to the lightness of the elegant sweep and fall of the crowning feather. This is a small work with a considerable aesthetic and narrative burden. Within her persona, Lewis's Minnehaha is designed to evoke the ambience of an untamed wilderness, the innocence of first love, and the nobility of a tragic figure caught in the inevitability of a sealed fate.

For most of the latter part of the 19th century these small marbles by Edmonia Lewis were highly prized; one example of her bust of Minnehaha was displayed at the National Academy of Design as early as 1868. Beginning in the 1990s they have begun to return to an increasingly avid market.

We would like to thank Edmonia Lewis scholar Marilyn Richardson for the catalogue essay. She is the Principal of Art + History Consultants, a research and design group in Watertown, MA. The technical description and condition report were provided by Cowan's Auctions. The bust was once painted white, and this residue can still be seen in areas. It has mostly worn to again expose the marble as it would have been after execution. The paint was applied several decades ago. Two natural veins in the marble extend both across the face and the neck/chest, each visible on the reverse side. A small loss is apparent above the Fecit A Roma inscription on verso.

Discovered in The Estate of Sidney Shackleton, Coldwater MI. Likely Purchased by the Above in Upstate New York