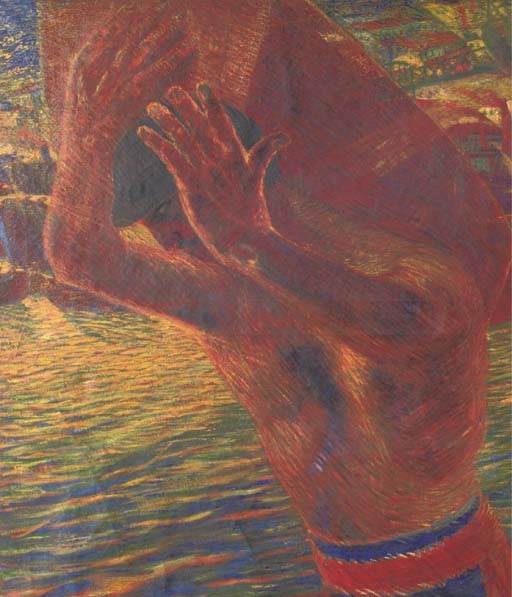 Alceste de Ambris, Milan, by whom acquired directly from the artist circa 1914.
Thence by descent to the present owner.

PROPERTY FROM AN ITALIAN FAMILY COLLECTION

Massimo Carrà has kindly confirmed the authenticity of this work. We are grateful to him for his assistance in cataloguing it.

Carlo Carrà's Lo scaricatore di porto is an exciting rediscovery that stands alone as a Divisionist masterpiece from the early period of the artist's life. It is also a historical link to his own formative revolutionary years, and to the revolutionary history of Italy itself. Both in its provenance and in the story of its execution, Lo scaricatore di porto's tale is intertwined with those of Carrà, one of Italy's most important painters, and of Alceste de Ambris, one of Italy's most important syndicalists and politician of the early 20th century. While Lo scaricatore di porto may have been begun as early as 1906, the picture that we see today is clearly filled with the new, radical style that marked Carrà's works at the very dawn of Futurism.

In his memoirs, La mia vita, Carrà recounted a story dating from his period as an art student at the Accademia di Brera in Milan that took place around 1906. During this period, he was asked by a company director to paint a picture of a dockworker for the cover of a catalogue, but when the work was completed the director reneged on the agreement, claiming that it was not at all what he wanted. The dispute became legal, and it was the Divisionist painter Gaetano Previati who finally was called upon as a referee and arbiter of taste. Previati found in favour of Carrà, saying that the picture was in fact worth a lot more than the agreed price. It now appears that it was Lo scaricatore di porto, unknown until its recent rediscovery, that was at the centre of this dispute.

While he was living in Milan in the first dozen years of the 1900s, Carrà had shown an increasing interest in Divisionism, which he saw in the works of Previati and also of Segantini. That he had managed to come into direct contact with Previati in a personal context was a fantastic boost to the young aspirant, a great encouragement, and he cherished and kept up this contact to some extent. Indeed, Previati introduced Carrà to many of the important artists of the day in Milan, especially his fellow Divisionists. However, this influence soon came to be eclipsed when Carrà came to know Umberto Boccioni and Luigi Russolo. The seeds sown by Divisionism began to flower into the early stages of Futurism, especially when the three artists came to know Marinetti, and by 1910 the Futurists had written their first manifesto.

Stylistically, much of Lo scaricatore di porto is clearly from a later period than 1906. It shows an incredibly strong sense of Divisionism, with an intense colourism underpinning the entire painting. The light effects of the feathered yellow brushstrokes on the water and of the red flecks on the dockworker himself show an artist filled with supreme confidence. Indeed, there is an angularity in Lo scaricatore di porto, a contrapposto, that even echoes Carrà's 1911 portrait of Marinetti. These stylistic traits have led to the conclusion that in this work Carrà has revisited an earlier, 1906 painting at a later date. Carrà has been known to have done this in several paintings, not least his celebrated I funerali dell'anarchico Galli. This work, which now hangs in the MoMA in New York, was begun in 1910, but Carrà returned to it on his journey to Paris in 1911, applying some of the new ideas that he had garnered during his visits, under Severini's guidance, to the studios of the avant-garde artists in the French capital.

The stylistic gap between a work of 1910 and 1911 is nothing compared to the gulf that divides a Carrà of 1906 with a Carrà of 1910 or 1911. While I funerali dell'anarchico Galli gained a great deal in movement, in the case of Lo scaricatore di porto there is no trace of a 1906 picture in the intense use of colour and even in the modernity of the theme. While the composition remains more static and formalised than in many of the comparable works from Carrà's post-Paris period, there remains a sense of motion while the background elements smack of an intense though incidental modernity. And in this, it is therefore imbued with a strong and early sense of Futurism. Here is an idealised and noble worker, illuminated by the electric light of the docks, with cranes and machinery in the background. There is an iconic intensity to his heroic domination of the canvas. For this picture is a celebration on an epic scale of the modern dockworker. It has a poster-like determination, the proletarian being used as propaganda for the fledgling Futurist movement.

While the Futurist movement was still young when Lo scaricatore di porto was completed, Carrà's political sensibility was not. Already in the late Nineteenth Century, he had been interested in the works and views of Karl Marx and various other anarchist and Communist authors. He had even built up contacts in these circles during his time in Paris and London at the turn of the century. It was his political involvement that had led to his participation in the debacle that took place at the funeral of Angelo Galli, who had been killed by police during a strike in Milan in 1904. The authorities, to avoid the funeral becoming overly political, had tried to limit its venue and to surround it by mounted police, but the bottled-up tension and violence inevitably led to furious rioting, with Galli's coffin almost being smashed on the ground.

Carrà's intense political involvement remained central to his participation in the Futurist movement. It is also reflected in the history of Lo scaricatore di porto, which was given or sold by the artist between 1911 and 1914 (two different sources mention two different dates for the transaction) to Alceste de Ambris, with whom the artist appears to have been on friendly terms and in whose family the picture has remained until today. At various times a prominent trade unionist, socialist, and syndicalist, de Ambris had been at the heart of pro-worker movements and was a founding father of the Italian Syndicalist Union, or USI. His influence as a trade unionist and a syndicalist was wide and international, ranging from Parma to Sao Paolo.

Perhaps the most famous of de Ambris' achievements, however, came just after the First World War. For in 1920, de Ambris co-authored the Carta del Carnaro with the celebrity poet and war hero pilot, Gabriele D'Annunzio. This was a constitution for Fiume, the city which D'Annunzio invaded on Italy's behalf with his Arditi, irregular troops. When Italy refused to recognise the annexation, D'Annunzio declared Fiume the so-called Reggenza Italiana del Carnaro and introduced a host of new measures (with de Ambris' help), aesthetics and titles that rang with the language and visuals of Futurism. De Ambris provided the ideas for this constitution, while D'Annunzio added his inimitable poetical flair to its content. This short-lived state lasted until D'Annunzio was forced to surrender to the Italian forces besieging him. The different paths that D'Annunzio and de Ambris took in the wake of these events reflected the history of Italy itself. D'Annunzio's adventure and aesthetics, and even his adopted title of Duce, came to inform Mussolini's fascism, while de Ambris became an absolute opponent of the movement. This opposition led to his exile to France, and consequently to the disappearance of Lo scaricatore di porto from public or academic knowledge.