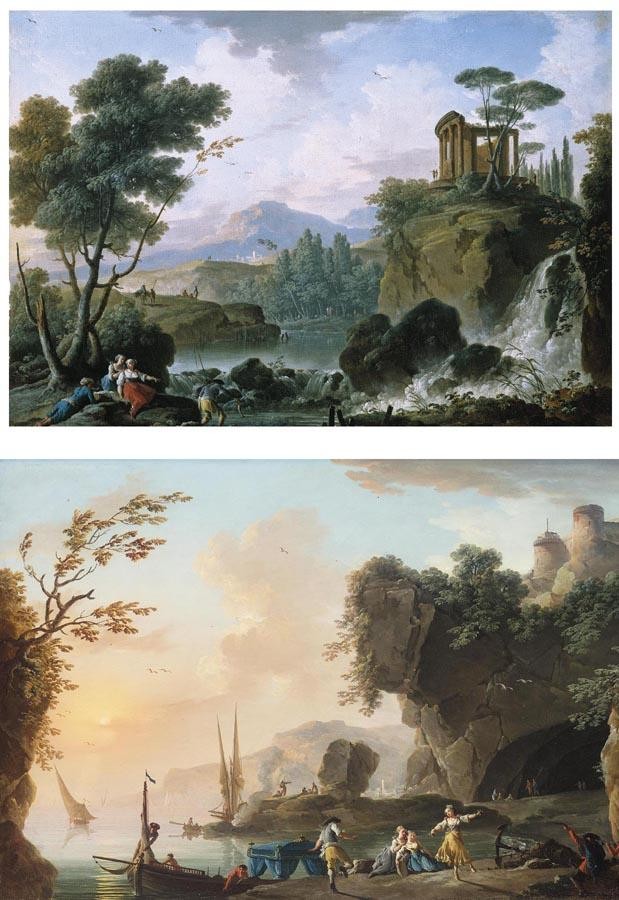 CHARLES-FRANÇOIS GRENIER DE LACROIX, CALLED LACROIX DE MARSEILLE MARSEILLE CIRCA 1700 - 1782 BERLIN A CAPRICCIO LANDSCAPE WITH TIVOLI, THE TEMPLE OF VESTA AND A WATERFALL, A FISHERMAN AND OTHER FIGURES IN THE FOREGROUND; A COASTAL ROCKY LANDSCAPE AT SUNSET WITH FIGURES DANCING BEFORE A CAVE

both oil on canvas, the latter only laid on panel

Lacroix de Marseille turned to painting both these views on a number of other occasions, though these appear to be the earliest known dated variants (others date from the 1770s). The former capriccio view of Tivoli may be compared to a very similar view, also of horizontal format but of smaller dimensions (33 by 44 cm.), signed and dated 1777, in which the figures, waterfall and temple are the same though the background is different, which was sold as part of a pair in New York, Parke-Bernet, 19 January 1984, lot 32. Another variant, in which the figures are different but again the temple and waterfall are the same, signed and dated 1773, was sold more recently in Paris, Christie's, 26 June 2002, lot 45 (as part of a pair). The scene of a mediterranean cove with figures dancing was also quite popular and Lacroix de Marseille is known to have executed other variants, all of them post-dating this particular interpretation by some years: examples include the painting sold in London, Sotheby's, 8 March 1972, lot 72 (signed and dated 1776), and another sold in Monaco, Sotheby's, 15-16 June 1990, lot 294 (signed and dated 1770).

The Wills Sale - Property from the Collection of the Late The Hon. Bobby Wills, removed from Farmington Lodge, Gloucestershire