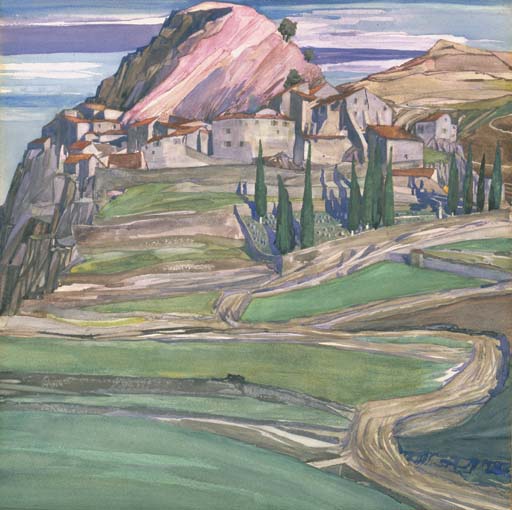 Purchased at the 1933 exhibition by Miss Nancy Mackintosh.
From whom purchased by Professor Thomas Howarth, and by descent.

Mackintosh's reputation in his lifetime, and to the present day, was based not just upon his work as an architect, but also as a designer and watercolourist. It was at the end of his life, after a particularly troubled time and a series of battles with officialdom, that Mackintosh decided to give up all thought of architectural practice and to devote himself to watercolour painting. His earlier flower studies, executed during the Walberswick and Chelsea periods had shown him to be an accomplished watercolourist, and the decision to leave England for France provided the catalyst for change.

In 1923 Mackintosh settled in Port Vendres, a tiny hamlet on the Mediterranean, near to the French-Spanish border. Here he pursued his new challenge with confidence and enthusiasm. The works he produced are a combination of flower and plant studies, and landscapes with a strong architectural bias. He painted the hill villages many times, attracted by the design elements created by the rock formations, the shapes of the houses against the hill side and the layer-effect of the fields. With patterns and colours dominating, the paintings he created became almost abstract.

Mackintosh intended to produce about fifty pictures for an exhibition at the Leicester Galleries, sadly he only completed about forty and died in 1928.

The present work is from the Collection of Professor Thomas Howarth and by descent to the present owners. Professor Thomas Howarth was Professor Emeritus of Architecture at the University of Toronto, having studied architecture and planning at the University of Manchester and taught at the Glasgow School of Architecture and at the Glasgow School of Art. He wrote the book Charles Rennie Mackintosh and the Modern Movement, first published in 1952, and put together an important personal collection of Mackintosh material. The Dr Thomas Howarth Collection which was offered for sale at Christie's, London, 17 February 1994, was 99.9 sold and realised a total of £2,370,912.

Please note that the Scottish National Gallery of Modern Art will be holding an exhibition of Charles Rennie Mackintosh's French watercolours in November 2005, and have expressed an interest in including this lot in the forthcoming exhibition.

The Scottish Sale at The Assembly Rooms Edinburgh