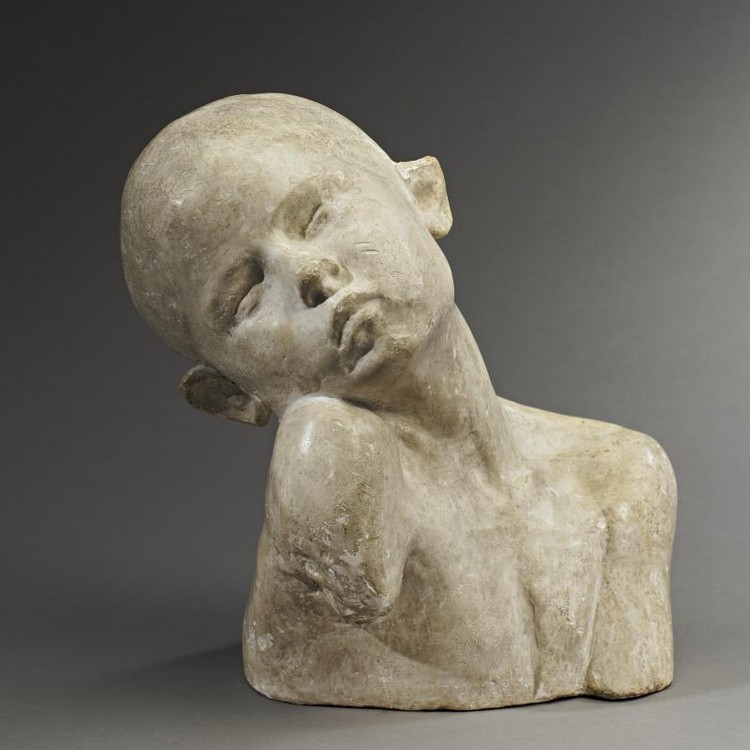 Signed with the initials

After graduating with honors from the Craiova School of Crafts in 1898, Brancusi immediately enrolled at the major national institute for the study of sculpture, the Bucharest School of Fine Arts. By 1905 he had obtained a stipend from the Romanian Ministry of Education and was enrolled at the École Nationale des Beaux-Arts in Paris. It was early in 1907 that Brancusi was invited by Auguste Rodin to become one of the many sculptors and assistants working in his studio at Meudon. Rodin had evolved a powerful surface tension in his modelled works, allowing the unsmoothed clay to function expressively and using the play of light across his bronze casts to create a kind of surface dynamism evident in Brancusi's sculptures at the time. As Brancusi himself said, "Besides...you cannot make what you want to make, but what the material permits you to make. You cannot make out of marble what you would make out of wood, or out of wood what you would make out of stone...Each material has its own life, and one cannot without punishment destroy a living material to make a dumb senseless thing. That is, we must not try to make materials speak our language, we must go with them to the point where others will understand their language" (quoted by Dorothy Dudley, "Brancusi", Dial 82, February 1927, p. 44).

Executed in 1907, the present work was preceeded by a larger version of 1906 which shows the figure's left arm folded across the chest. According to Sidney Geist, the influence of Medardo Rosso is evident in the modelling which is sensitively executed and reveals only the most subtle expression. Torment (Le Supplice) is one of Brancusi's first works to have been conceived in more than one version. In the present work, the surface modelling has been reduced in order to concentrate more fully on the overall design.