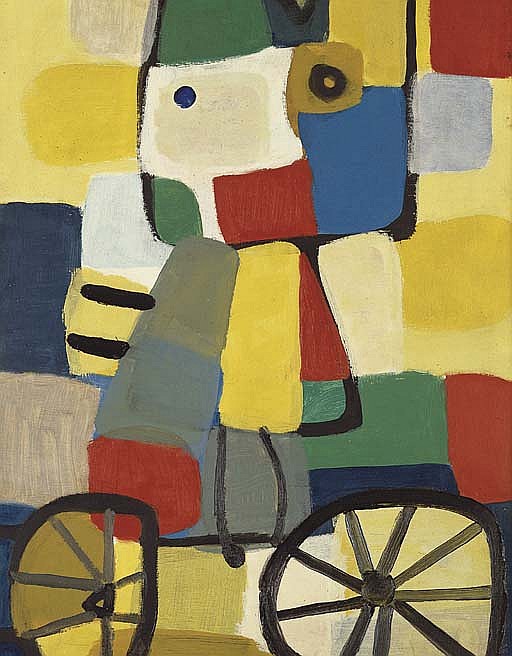 Tempe, Arizona, Arizona State University, Cobra: Before, During and After, 8 February-11 May 2003.

" ! " : This lot is imported from outside the EU. For each lot the buyer's premium is calculated at 31.1% of the hammer price up to a value of €400,000 plus 21.58% of any amount in excess of €400,000.
Dated 1951, Cycliste was painted during the few years that marked the climax of CoBrA's 'militant' action as a group. Karel Appel and his fellow CoBrA artists wanted to start anew. They rejected rational Western culture, which, as could be seen from World War II, had shown itself to be rotten to the core. With the emphasis on the instinctive, the spontaneous, the unplanned and the uninhibited, they wanted their art to reflect the new times. To this end, existentialism, a widespread doctrine of thinking in Europe at the time, also played part in their philosophy. In a climate in which the torn 'body' of Europe was undergoing a reconstruction after the horrors and the damages of the war, existentialism promoted the understanding that man was alone in this alien world and that responsibility ultimately resided within the individual.

Looking back Appel recalls: "Our dream was to throw academic culture out of the window, to demolish everything and open up new roads; it was like childhood rediscovered, with all its freshness and dreams."
He goes on: "I've always dreamed of revolutionary forms of expression able to reflect the very play of life and society, of nature and city. I've always tried to catch the secret movement of existence with the maximum of spontaneity, flexibility and transparency." (In an interview with Frederic de Towarnicki, cited in K.A.Becht, Karel Appel, New York 1985, p.165)

In their wish to reach this very source of human creativity, Appel and the other CoBrA members took their examples from those forms of art which appeared not to have been touched or tainted with the rules and conventions of the Western world. Hence, seeking inspiration from the primitive peoples with their totems and magic signs and from unspoiled aspects of Western culture such as folk art, naive art and above all the art of children, they wanted their art to express the same rawness and freshness. As opposed to art stemming from reason and rationality, their art was an art as a kind of game, a play activity aiming at more and more liberty.

"Sometimes my work looks very childish, or child-like, schizophrenic or stupid, you know. But that was a good thing for me. Because for me, the material is the paint itself. In the mass of paint, I find my imagination and go to paint it." (In a recorded interview with Alan Hanlon, New York 1972)

Using vibrant, unmixed colours of red, yellow and blue, and broad brush strokes, Karel Appel creates his friendly, innocent child-like beings and animals. In Cycliste he depicts an excited child riding a bicycle. As if seen through the eyes of a child, the work radiates uncomplicated happiness and joy.