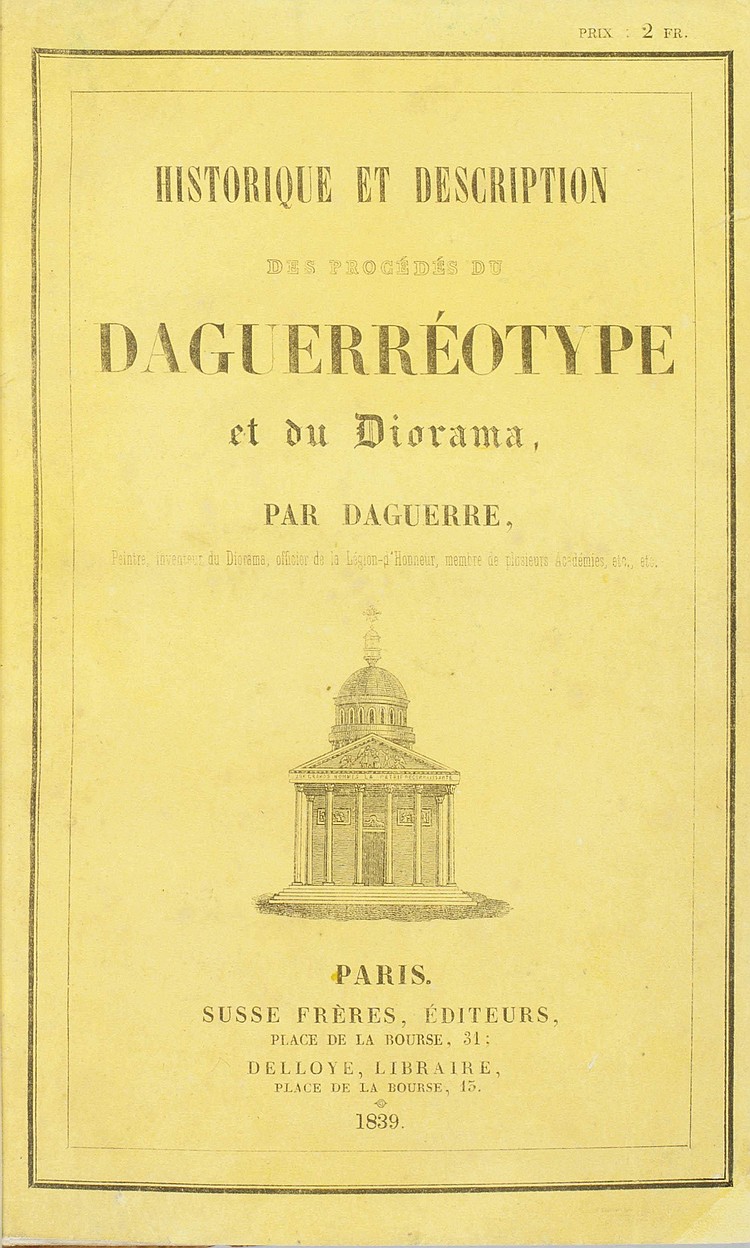 FIRST EDITION, FIRST ISSUE, second imprint of Daguerre's exposition of his photographic process. "THE BEGINNINGS OF PHOTOGRAPHY" (Horblit). "At a joint meeting of the French Academies of Arts and Sciences, Count François Arago announced the miraculous invention of Louis-Jacques-Mandé Daguerre, a method for making faithful impressions of objects on sheets of copper, coated with light-sensitive silver salts. Arago's announcement trumped the efforts of Talbot, much to the Englishman's chagrin" (Parr-Badger vol.I, p. 13). A VERY ATTRACTIVE COPY OF THIS GREAT RARITY. Dibner Heralds of Science 183; En français dans le text 255; Gernheim The History of Photography, chapter 6; Horblit/Grolier 21a (reproducing the 4th issue); Norman 569 (same issue); PMM 318b.

Daguerre, a gifted set designer and creator of the famous Diorama, a picture show based on lighting effects, began experimenting in the 1820s with fixing the images of the camera obscura on silver chloride paper. His continued lack of success using this method stimulated his interest in the heliographic method invented by Nicéphore Nièpce, who had produced the first successful photographic image in 1826 or 1827 on a pewter plate coated with bitumen of Judea dissolved in oil of lavender, and in 1829 Daguerre succeeded in persuading the reluctant Nièpce to become his partner. It was only after Nièpce's death, however, in the spring of 1835, that Daguerre accidentally discovered a quicker method of exposing and developing the Niècian image through the application of mercury vapor. Using this method, with common table salt as the fixative, he produced his first successful permanent photographic image in 1837. Still under contract with Nièpce's son Isidore, Daguerre agreed to split the profits from the new invention in exchange for calling it by his name alone. He then proceeded to launch a publicity campaign with the goal of attracting 400 subscribers at 1,000 francs each, stipulating that the processes of heliography and "daguerrotype" would not be revealed until 100 subscribers were enrolled. This failed, and the resourceful Daguerre turned to other methods, privately approaching a number of leading scientists with the goal of interesting the government. "He was fortunate in finding in François Dominique Arago an influential ally, for he was a member of the Chamber of Deputies as well as a distinguished physicist and astronomer. Soon afterwards, Arago gave the discovery official status by a brief announcement at the Académie des Sciences, on 7 January 1839" (Gernsheim, p. 68). Arago energetically promoted the invention and succeeded in obtaining government funding for the two partners, although in the course of his arguments he gradually shifted credit for the invention to Daguerre, at the expense of Nièpce's pioneering work. By the summer, Daguerre was finally obliged to divulge the details of "his" process (though not before Fox Talbot, in reaction to the news of Daguerre' invention, had published his own announcement of his independent invention of a photographic process). On August 19 Arago made a full announcement to a packed house at a joint meeting of the Académies des Sciences and des Beaux-Arts at the Institut de France. The excitement was palpable. "Perhaps no other invention ever captured the imagination of the public to such a degree and conquered the world with such lightening rapidity as the daguerreotype" (op. cit., p. 71). Daguerre's manual, published by order of the government, was quickly sold out. A total of 39 reprints, new editions, and translations appeared in the following 18 months. The great demand accounts for the profusion of issues of the first edition: 7 are recorded, all from the same basic setting of type. Of these the first four differ in the booksellers' names alone. The present copy is of the first Susse issue, the second to appear, preceded only by the Alphonse Giroux issue, published shortly after Arago's 19 August announcement, of which only three copies are known.

Along with the official documents relating to the government's review of the procedure, Daguerre's manual includes details of its genesis, including a transcription of Nièpce's own description of his heliographic process, submitted to Daguerre in 1839, and a full illustrated description of his daguerreotype process -- presented as an independent invention, superior to Nièpce's. Isidore Nièpce, justifiably disgusted at the deliberate obscuring of his father's prior claim to the invention, finally published a full account of the heliographic process in 1841 (Histoire de la découverte improprement nommée daguerreotype) in an attempt to rectify the misrepresentation, but by then it was too late, and in the public imagination Daguerre competed only with Fox Talbot for the title of inventor of photography. Ironically, only Nièpce's original heliographic method was susceptible of improvement (see Gernsheim, p. 63), whilst Daguerre's, although capable of producing beautiful and clear images, was a dead end, mainly because its mirror-like solid-metal plates could not be used as negatives to print copies, making each picture unique.