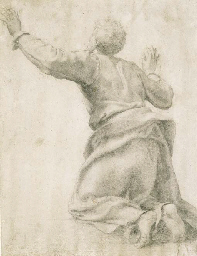 A kneeling figure seen from behind black chalk, some made up losses 327 x 252 mm. PROVENANCE John Skippe (1742-1812) by descent toEdward Holland Martin, Esq.; Christie's London, 20-21 November 1958, lot 83 (14 gns. to Schidlof). LITERATURE P. Barolsky, Daniele da Volterra, a catalogue raisonn‚, New York, 1979, p. 86, pl. 58. J.A. Gere and P. Pouncey, Italian Drawings in the Department of Prints and Drawings in the British Museum: Artists working in Rome c.1550 to c.1640, London, 1983, under no. 76. NOTES A study for the apostle in the right foreground of Volterra's fresco of the Assumption of the Virgin in the della Rovere chapel in SS. Trinit… dei Monti, Rome, datable to circa 1550-3, P. Barolsky, op. cit., pl. 51. Three studies of similar size and technique for two apostles and the Virgin are in the British Museum (J.A. Gere and P. Pouncey, op. cit., no. 76, pl. 72) and the Louvre, P. Barolsky, op. cit., figs. 59-60. A study for the complete fresco is in the Uffizi, P. Barolsky, op. cit., fig. 56. The decoration was begun in 1548, when the chapel was awarded to Lucrezia della Rovere. But by the time of her death in August 1553 the commission was not yet completed. Vasari, referring with faint sarcasm to Volterra's inclination to fill his compositions with as many figures as possible, describes how the artist managed to cover the alotted space. Apostles were painted leaning on the altar, with others even filling the wall down to floor level, leaving the altar looking like a tomb. Early prints show the altar in this state, but the lower areas were later cut away, truncating a number of apostles including both the present figure and the apostle studied in the British Museum sheet.