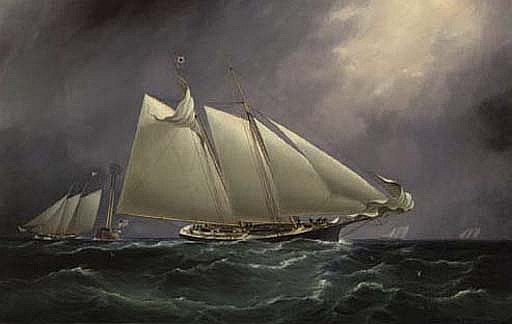 "Dauntless" leading "Columbia" at the lightship with "Madeleine" following

Lot 119: "Dauntless" leading "Columbia" at the lightship with "Madeleine" following

The quality of the Buttersworth paintings from the Collection of the Late Horace Havemeyer, Jr. chronicle the history of yachting in the United States and illuminate the artist's role as America's great marine painter of the 19th century. Painted during an era when America had begun to assert its political and economic strength as a world power, resulting in a growing commerce and more luxurious lifestyle for many of its citizens, these works capture the nation's emerging appreciation for, and fascination with, the sport of yachting. The works simultaneously attest to America's strength during the century and evoke a powerful nostalgia for a popular pastime.

On occasion, Christie's has a direct financial interest in lots consigned for sale which may include guaranteeing a minimum price or making an advance to the consignor that is secured solely by consigned property. This is such a lot. This indicates both in cases where Christie's holds the financial interest on its own, and in cases where Christie's has financed all or a part of such interest through a third party. Such third parties generally benefit financially if a guaranteed lot is sold successfully and may incur a loss if the sale is not successful.
The 1870s was a golden decade for American yachting and, in this wonderfully atmospheric work; James Edward Buttersworth has captured three of that era's most celebrated thoroughbreds. All three yachts enjoyed hugely successful careers but it was the added excitement of their participation in the earliest defences of the fabled America's Cup which gave each one of them their own measure of immortality. Following America's legendary win at Cowes in 1851, the U.S. schooner Sappho went to Cowes in 1868 to try and repeat that earlier triumph only to be soundly beaten by Mr. James Ashbury's Cambria. This unexpected success so fired Ashbury's enthusiasm for the sport that he decided to mount the first official challenge for the America's Cup in 1870 using his well-tried Cambria. Undeterred by his subsequent defeat, he then mounted a second challenge the following year when the New York Yacht Club fielded the brand-new Columbia as their defender.

Designed and built for Franklin Osgood by J.B. van Deusen, Columbia displaced 220 tons and measured 108 feet in length with a 26 feet long beam. James Ashbury had also invested in a new boat, the Livonia, which was significantly larger in every respect, and yet, when the two yachts met in the first race on October 16, 1871, Columbia romped home fully 27 minutes ahead of her English challenger. Two days later she won the second race by almost 11 minutes and, even though Livonia won the third and last race on the 19th, Columbia was duly declared the winner of the series and the coveted trophy returned to the New York Yacht Club to await future challenges.

Although Dauntless was never actually selected to defend the Cup, she nevertheless played a leading role in both the 1870 and 1871 British challenges. During both series she took part in a number of races and, more significantly, had also participated in the famous transatlantic race from Daunt's Rock, Cork Harbor, Ireland to Sandy Hook which preceded the 1870 Cup match. James Ashbury won that transatlantic dash in Cambria but Dauntless, owned by the colorful New Yorker James Gordon Bennett, was less than two hours behind him in the race that lasted twenty-three days. Straight after his failure to recover the Cup in 1871, Ashbury then pitted his new Livonia against Dauntless in a private race which Livonia won so convincingly that it merely made Ashbury feel even more aggrieved that he had been so decisively beaten by Columbia.

Madeleine, designed and built for John S. Dickerson by David Kirby in 1868, was modified in 1873 and 1875. She was chosen to defend the Cup against the Canadian challenge by Countess of Dufferin in 1876 but, by then, she had long since made her reputation as one of the fastest yachts on the eastern seaboard. Like Columbia before her [in 1871], Madeleine swept to victory in only two races and secured her place in yachting's 'Hall of Fame' by so doing. Despite crowning her career with the America's Cup win in 1876 however, she had previously taken part in the 1870 races when Cambria was the challenger; even though she only came in twelfth on that occasion, she then went on to win both the Block Island Race and the Stuyvesant Cup off New York that September. By the time the 1876 challenge came along therefore, she was the obvious choice to defend the Cup despite her age and proved the wisdom of her selection by winning so handsomely.

This painting probably depicts the Brooklyn Yacht Club regatta of June 27, 1871. This regatta, the first major regatta of the 1871 season, had 55 entries of schooners and sloops. While the weather related in the news accounts was not as dramatic as depicted by Buttersworth, it accurately depicts the positions of the schooner yachts as they passed Roamer shoal, after rounding the lightship. Dauntless won the race "without allowance" in 4 hours, 35 minutes, 58 seconds; followed by Columbia who finished second "without allowance" in 4 hours, 37 minutes, 16 seconds; and Madeleine, who won on corrected time with a finish of 4 hours, 38 minutes, 29 seconds.

Thus, the combined achievements of these three notable yachts can hardly be overstated and this classic depiction of them competing against each other making this painting a work of real historic significance within the wider story of American yachting.