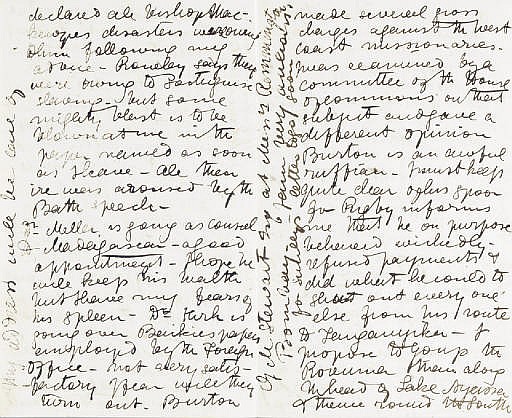 'BURTON IS AN AWFUL RUFFIAN'

'WE TRAVELLERS HAVE NOT BEEN SHINING OF LATE'

A HIGH-SPIRITED, GOSSIPY LETTER, ON THE PUBLICATION OF THE ZAMBESI AND ITS TRIBUTARIES, CRITICISING BURTON ('AN AWFUL RUFFIAN') AND OTHER TRAVELLERS, AND COMMENTING ON THE AMERICAN CIVIL WAR. Livingstone comments on the delays in John Murray's publication of The Zambesi and its tributaries, not least because of an assertion that 'the map required a man to work at it for a month night & day' -- on which the explorer comments drily 'There is no use quarrelling with the old heathen so I say nothing but like the cabbie think a great deal'; the delay until November at least has the advantage that Livingstone 'will be away out of the sight, sound and sough of critics before they can lay hold upon me'; in particular, he comments on 'a writer employed by the Portuguese Ministry to write me down in the official journal Diario de Lisba -- pronounce it Diarrhoea of Lisbon!'. After commenting on the activities of Mellor and Kirk, Livingstone launches a comprehensive attack on Richard Burton: 'Burton is an awful ruffian -- I must keep quite clear of his spoor for Rigby informs me that he on purpose behaved wickedly ... to shut out every one else from his route to Tanganyika', in spite of which Livingstone intends to explore that lake. His attack continues: 'I don't believe that Burton was ever at Mecca', alleging that he copied his account 'word for word' from an American, and that he is upheld only by support from Lords Stanley and Houghton, 'or else his atrocious attack on Speke after his death would have sunk him'. Livingstone comments ruefully on further activites of Burton and others, remarking 'We travellers have not been shining of late', as he recounts gossip of 'Macdougall Stuart who first crossed Australia from South to North [who] got raving "fou" at the anniversary dinner and his brother in law made things worse by apologizing for the disgraceful scene made by the little inebriate', together with other similar scandals. The letter ends with comments on the capture of Jefferson Davies, and the popular sympathy for him in Britain: 'It would be a blunder to hang him ... I don't see that a man who fights in order that he may not pay the men who serve him can be considered quite a tip top gentleman'. A postscript notes that Livingstone is visiting his mother, 'aged 82 & not long for this world I fear', and comments 'My consulship is magnificent enough but no salary attached to it'.

Sir Thomas Maclear (1794-1879) succeeded Thomas Henderson in 1833 as Royal Astronomer at the Cape of Good Hope, arriving ten days before Sir John Herschel 'whose co-operator and attached friend he became' (DNB). His astronomical observations contributed greatly to the knowledge of the southern skies. He was forced to retire in 1861 and took up residence at Grey Villa, Mowbray, near Cape Town. Undoubtedly Livingstone knew him well and this chatty letter indicates the close confidences that they had developed over the years.