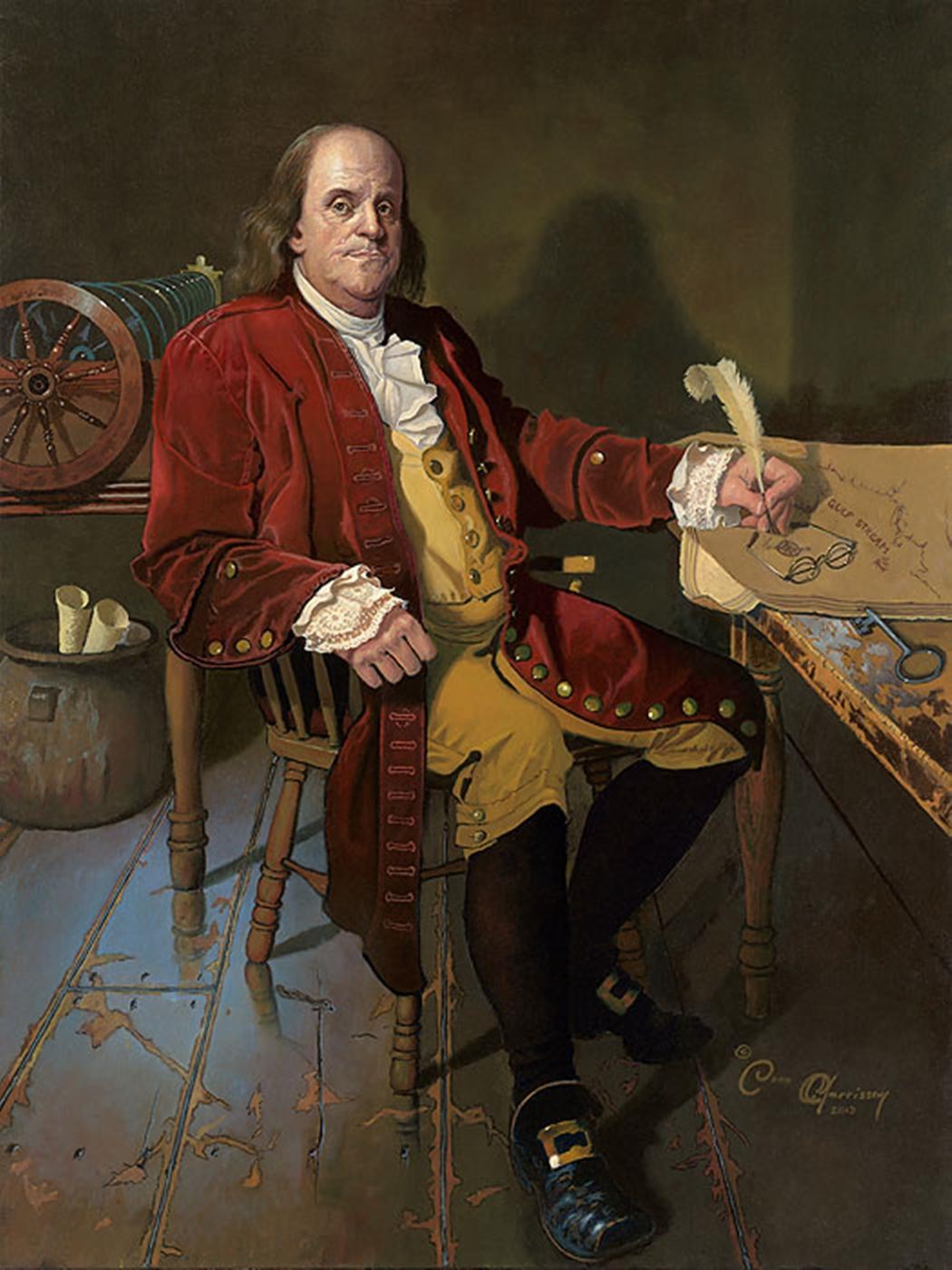 If you would not be forgotten as soon as you are dead, either write something worth reading or do things worth writing, wrote Benjamin Franklin. He certainly did both, becoming the most accomplished American of his age and the most influential person in creating the type of society America would become. During his 84-year life, Franklin rose from runaway apprentice to become Americas best writer, inventor, media baron, scientist, diplomat, business strategist and favorite Founding Father. Dean Morrisseys portrait of Franklin depicts the great statesman with a few of his well known inventions and inquiries. Behind him is his Glass Armonica, a musical instrument comprised of thirty-seven glass bowls mounted horizontally on an iron spindle. The whole spindle turned by means of a foot pedal. The sound was produced by touching the rims of the bowls with water moistened fingers. Each rim was painted different color according to the pitch of the note. He is working on is his map of the Gulf Stream, which he was the first to chart and name. He noticed that mail packets sailing from England would often take weeks more to make the same trip as a merchant vessel. After consulting with experienced ship captains he created his chart so eastbound ships could avoid sailing against the three miles per hour current. The key is from his experiment to prove that lightning was, indeed, electricity. In a letter describing the 1750 experiment he noted, When rain has wet the kite twine so that it can conduct the electric fire freely, you will find it streams out plentifully from the key at the approach of your knuckle. He was also proposed that what was then known as vitreous and "resinous" electricity were not different types of "electrical fluid (as electricity was called then), but the same electrical fluid under different pressures. He was the first to label these as positive and negative flows. He is known as the father of the bifocal, because of a famous drawing he made of his glasses in 1784, but there is much evidence that he had created them long before that. As early as 1775 the Philadelphia optician who made his glasses references bifocals in his writings and a 1779 letter and bill from his optician in Paris, France apologizes for the delay in delivering his order because he broke numerous lenses while cutting, not grinding, the glass. Dean Morrisseys "Ben Franklin: Patriot and Renaissance Man" celebrates the intelligence and natural curiosity that drove Franklins search to continually discover ways to make things work better. It was only natural that when such a great and energetic mind focused on the problem of colonial exploitation such great things would come to pass.

More Information: Dean Morrissey has been drawing and creating characters since his childhood in Boston. Inspired by Disney matte paintings and comic book heroes early on, he grew to appreciate the works of the masters, such as Rembrandt, Vermeer, Pyle and N.C. Wyeth. Morrissey worked a variety of job until deciding to paint full time in the late 1970s. He worked as a freelance book cover illustrator for over 15 different publishers in New York and won numerous awards. Morrissey is self taught, and considers the demands of cover illustration to have been his art school. In 1991, Morrissey began to paint some images from a story that he was creating. His books include Ship of Dreams Harry N Abrams (1994), The Great Kettles: A Tale of Time Harry N Abrams (1997), The Song of Celestine Little, Brown and Co. (1998), The Christmas Ship HarperCollins (2000), A Christmas Carol Press (2000), The Moon Robber HarperCollins (2001), The Winter King HarperCollins (2002), and The Monster Trap HarperCollins (2004). His awards include The Society of Illustrators Gold Medal for The Great Kettles, The Chesley Award for The Light Ship (2002), and he is a current nominee for this years Chesley Award for Anna of the Celts (2003). Morrissey lives with his wife Shan and his son on the South Shore of Massachusetts.

Shipping will be added to each invoice at the end of the auction and will be calculated according to size, weight, and geographical location. Please allow 1 to 6 weeks for shipping. All checks must clear through our bank before shipment will be sent.

The lots listed in this catalog will be offered by Sand & Rose, LLC as owner or as agent for consignor(s) subject to the following terms and conditions. By bidding at auction you agree to be bound by these Conditions of Sale.

Shipping will be added to each invoice at the end of the auction and will be calculated according to size, weight, and geographical location. Please allow 1 to 6 weeks for shipping. All checks must clear through our bank before shipment will be sent.