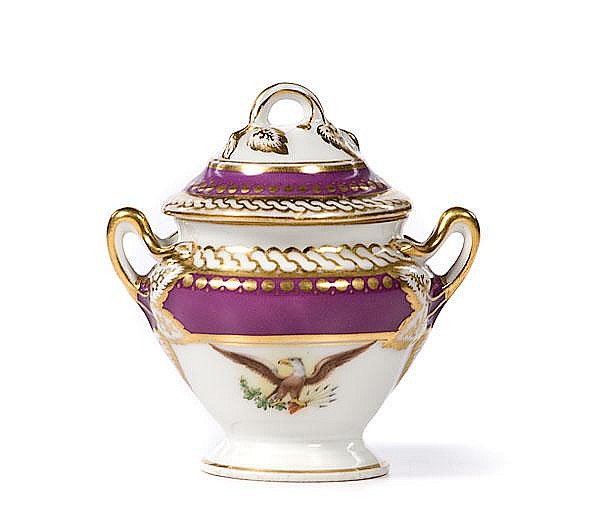 Dessert Sugar Bowl From First Lincoln White House ServiceFrench, ca 1861. A Haviland, Limoges porcelain dessert sugar bowl from the state service made for President Abraham Lincoln. The center printed and painted with a brown eagle clasping a laurel branch and a cluster of arrows in his talons. Top portion of bowl and lid feature royal purple rim edged with a border of gilt dots and "Alhambra" tracery, Ht. (with lid) approx. 4 in., dia. approx. 3.5 in.

The "Solferino" or "Royal Purple" service, as it became known, was ordered by the First Lady, Mary Todd Lincoln, from Messrs. E. V. Haughwout & Co. in May of 1861 during a shopping visit to New York City to purchase furnishings for the White House as well as a formal dinner service. "Solferino", a rich puce color, had been made fashionable by the French in about 1859, and Mrs. Lincoln perpetuated the vogue by employing it liberally in the interior decoration of the executive mansion. The service was delivered to the White House on September 2, 1861, and numbered 658 pieces, including a dinner service of 190 pieces, a dessert service of 208 pieces, and a breakfast and tea service of 260 pieces. The total cost was $3,195.00.

Following President Andrew Johnson's arrival at the White House, it was decided that replacements for this service must be purchased, and in January, 1866, E. V. Haughwout received an order for 499 pieces which were supplied at a cost of $2,061.25. It has been speculated that the decoration on these pieces may have been hand painted by Edward Lycett, the most renowned American china painter of his day.

Retaining its popularity, pieces for this service were reordered during the administrations of Presidents Ulysses S. Grant in 1873 and Chester A. Arthur in 1884. These pieces bear a red-printed Haviland & Co. and retailer's mark. A number of souvenir plates were made for popular consumption at the time of the U. S. Centennial celebration in 1876, distinguishable by their printed mark: Administration ABRAHAM LINCOLN See Lot 642.

Robert Todd Lincoln and Mary Harlan Lincoln had three children: Mary ("Mamie"), Abraham II ("Jack"), who died at age 16 of blood poisoning and Jessie. Mamie married Charles Isham and had one son, Lincoln Isham (1892-1971) who never married, and left most of his historic possessions to the Library of Congress.

Jessie married Warren Wallace Beckwith in 1897. The couple had a daughter, Mary Lincoln Beckwith, and a son, Robert Todd Beckwith.

Mary ("Peggy") Beckwith (1898-1975), was probably a lesbian, never married and died childless. She spent much of her later life as a recluse at Hildene. Her death left Robert Todd Lincoln Beckwith as the last surviving direct descendant of the 16th President of the United States.

Robert Todd Lincoln ("Bud" or "Bob") Beckwith (1904-1985) married three times. His first marriage to Hazel Holland Wilson ended without issue; his second marriage to Annemarie Hoffman ended in divorce in 1976 when she was discovered to be pregnant - but apparently not by Bud Beckwith. Beckwith married again in 1979, this time to divorcee Margaret Fristoe (1901-2009). At Bud's death in 1985 the items offered here passed to Margaret, and at her death in 2009, the collection descended to her daughter from her first marriage.

Several of the lots are accompanied by Xerox copies of affidavits signed by Beckwith in 1977 indicating that they were found in the attic of Hildene in a trunk belonging to Mary Lincoln. An inventory of the trunks prepared by Beckwith at the time reveals that much of the material was clothing, though silver, and a letter seal (Lot 280) are also noted.

Some of the jewelry offered here bear paper string tags indicating they belonged to Mary Todd Lincoln, or family members of Mary E. Harlan, Robert Todd Lincoln's wife. While most of the jewelry is clearly of the correct age, no pieces can be positively ascribed to Mary Todd Lincoln. One piece of jewelry (Lot 291), however - a lady's pocketwatch inscribed "Jack" - the nickname of her son Abraham Lincoln II -- is almost certainly the property of Mary E. Harlan Lincoln.

The affidavits accompanying several of the lots are signed during a period when Beckwith made donations of Lincoln family materials to a number of institutions including the Illinois State Library (now the Abraham Lincoln Presidential Library), the Chicago Historical Society (now the Chicago History Center), the New York Historical Society, and others. Much of the material is genuinely associated with Abraham Lincoln. China from the Lincoln White House (Lots 274-275) and a cartes de visite and check autographed (Lots 272-273) by Lincoln bear witness to the Lincoln-Beckwith family association. The remaining material is associated only through oral tradition. Without further concrete documentation, it is impossible to ascertain whether the property belonged to Mary Todd Lincoln, Mary Harlan Lincoln or other descendants. Given the documented personal wealth and civic largesse of Bud Beckwith, he had little monetary reason to fabricate provenance. Clearly he was certain of their family history.

Expected soiling on underside of base; otherwise excellent.

American History, Including the Civil War