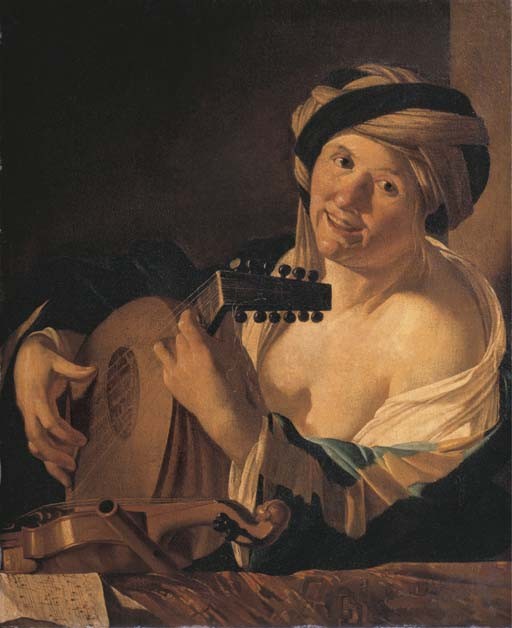 A woman playing the lute, a violin, flute and music on a draped ledge before her
oil on canvas
85.3 x 69.6 cm.

In the collection of the family of the present owners, The Netherlands, since presumably the late 19th Century.

This newly discovered picture is a notable addition to the small oeuvre, (numbering around thirty paintings) of the short-lived Dirck van Baburen. The composition is known through a Duet recorded by Leonard Slatkes as a copy after a lost original, in which a boy playing a flute has been incorporated into the background (see L.J. Slatkes, Dirck van Baburen (c. 1595-1624): a Dutch painter in Utrecht and Rome, Utrecht, 1965, no. B6, fig. 42). The lack of compositorial unity in the Berlin copy would seem to imply that the extra figure was an invention of the copyist rather than of Van Baburen's design. Certainly there is no indication of the figure in the present picture and the preservation of the original tacking edges confirm that the format has not been adapted in any way.

Slatkes (loc. cit.) compares the lute player to the central female in Van Baburens Lot and his Daughters, dated 1622, and to a related facial type in the Roman Charity: Cimon and Pero, in the York Museums Trust (York Art Gallery), inv. no. 788 (see fig. 1). The picture also corresponds to a male Lute player also of 1622, in the Centraal Museum, Utrecht, leading Slatkes to speculate on a date of 1622 or early 1623 for the prototype of the Berlin copy. The same date has more recently been proposed for the present picture by Albert Blankert.

It has been pointed out that the picture is executed on an Italian black grounded canvas. If a date of 1622 is to be relied on, it still remains unclear as to whether the picture would have been painted in Rome or Utrecht since the date of Van Baburen's return to Holland is a matter of some controversy. The existence in Italy of several versions of the artist's Christ among the Doctors, dated 1622, indicate that the artist was still in Rome in that year, a notion that is supported by the Italian preparation of the present canvas. However, Slatkes was of the opinion that Van Baburen had returned to Utrecht already in the summer of 1620 (see L.J. Slatkes, 'Bringing Ter Brugghen and Baburen up-to-date' in Bulletin du Musée National de Varsovie, XXXVII, 1996, pp. 201-15).

We are grateful to Professor Dr Albert Blankert for confirming the attribution after inspection of the original.

Please note that the original tacking edges are partially damaged, and that it is not proven that the present canvas is Italian. Please also note that the no. of the comparable Duet in L.B. Slatkes, 1965 should read B6.