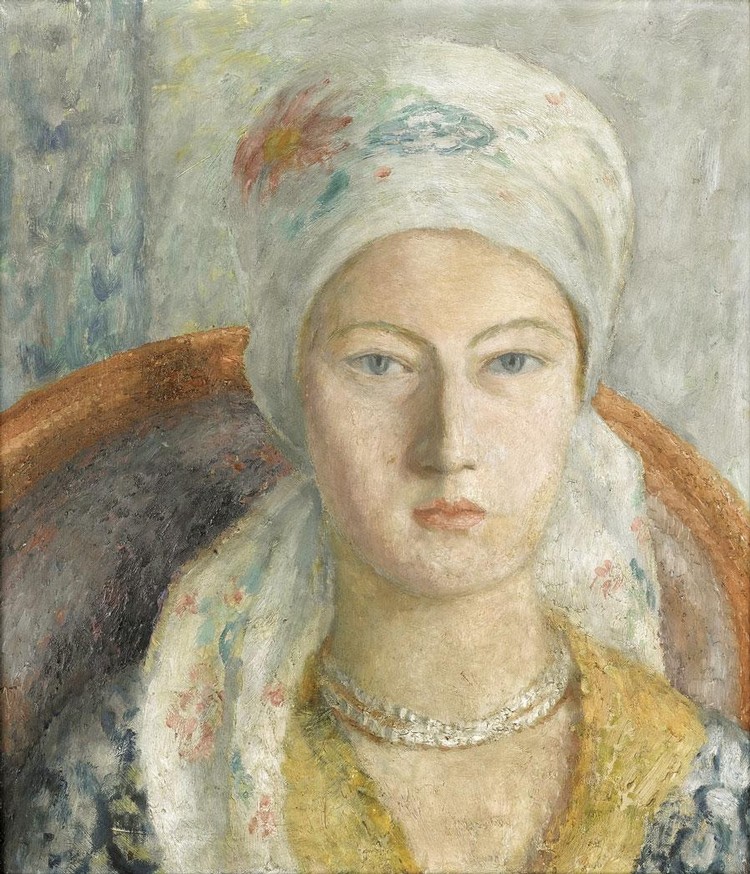 Carrington met Julia Strachey (1901-79) in the mid-1920s and was immediately entranced by her charm, intelligence and beauty. The niece of Lytton Strachey, Julia had been a model in Paris and student at the Slade, and was working to establish herself as a novelist. Her friendship with Carrington blossomed further when she married the sculptor Stephen Tomlin in 1927 and came to live in Wiltshire near Ham Spray where Carrington had made her home with Lytton Strachey. The relationship between the two women was recorded in their six year correspondence begun in 1925, in which Carrington signs herself 'Tante C' or 'Aunt C', while Julia appears to have acted as something of a style advisor to her older friend (see David Garnett, Carrington: Letters and Extracts from Her Diaries, Jonathan Cape, London, 1970). Sharing a love of fine clothes, Julia later remembered, 'For me, in my twenties, she produced powders and perfumes, hats, beads and ribbons. She helped me dress up to go to parties and entered into all my fantastic projects for plays and perfomances.'

Painted at Ham Spray in 1925, this portrait shows Julia dressed in a silk turban and glittering necklace. Investing her sitter with a certain exotic femininity Carrington's palette of soft pastels is in direct contrast to the bold directness of her sitter's pose and pursed lips, revealing of Julia's strong character and acute powers of observation.

Julia Strachey's celebrated first novel, 'Cheerful Weather for the Wedding' was published by Hogarth Press in 1932 and later became a Penguin Modern Classic. Carrington had originally planned to design its dust jacket but, following Lytton Strachey's untimely death, she in turn committed suicide in March of that year. Julia went on to publish a number of short stories and a second novel - 'An Integrated Man' (1951) - and though her marriage to Tomlin broke down in 1934, she later met Sir Lawrence Gowing, her second husband from whom she became inseparable. After Julia's death in 1979, her great friend Frances Partridge edited her letters and diaries into a book called 'Julia' in which her moving and perceptive tribute may be found, 'Carrington - A Study of a Modern Witch' .