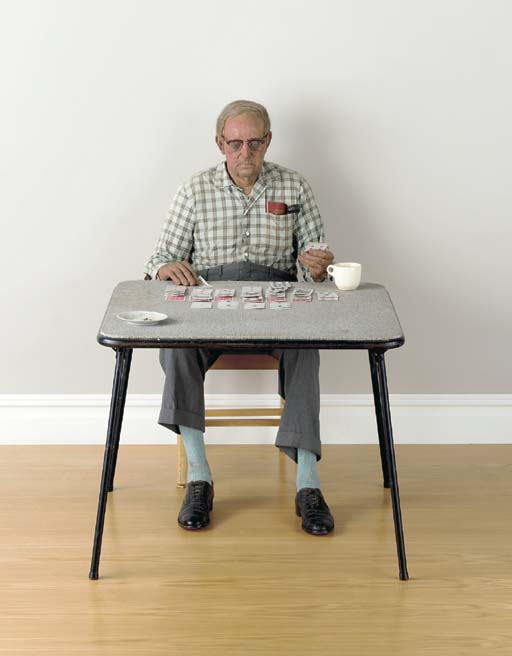 O.K. Harris Works of Art, New York
Acquired from the above by the present owner, 1973

Old Man Playing Solitaire is the ultimate expression of realism executed during one of Hanson's most poignant years of production, 1973. Building on a precept of Pop Art that any mundane subject potentially has artistic worth, Hanson portrays the psychological alienation of an old man, rendered in exacting detail, who has entered his golden years only to find them lonely and reclusive. The overwhelming pathos portrayed in Old Man Playing Solitaire is a cutting commentary on the myth of the American dream and a searing vanitas. Kirk Varnedoe writes, "Such works affirm paradoxes: the most acute records of life are often intimately connected with the threat of death; splendid duplication of material stuff may be associated with intense transcendental spirituality; and unblinking attention to the quotidian commonplace is frequently the vehicle for ideologies of ultimate truths. In sum, sharp verism has characteristically served not as a positivist affirmation of the world of the senses, but is the remorseless weapon of a critical world view" (K. Varnedoe, Duane Hanson, New York, 1985, p. 8).

Duane Hanson was close to forty years old before he found his true artistic voice. Formerly a wood and stone carver, Hanson had grown frustrated with his abstract sculptures. Witnessing the evolution of Pop through art journals, Hanson radically transformed his body of work in the mid-1960s. His initial life-like sculputures were politically motivated taking on controversial subjects in works like War and Race Riot. These initial forays into realism found resonance with artists like Edward Keinholz. His overtly political essays quickly gave way to the more contemplative mature works of the 1970s. At the same time, his works did not lose their political poignancy. Instead they shifted their focus to the politics of the individual.

"His (Hanson's) interests have come to center on human experiences he finds are revealed only in extended stillness. Hanson has distinct beliefs as to what is typical and enduring in the lives of the people he creates, and these exclude much of what we normally think of as animation: not only eroticism and physical motion, but also laugher, smiling, and even interpersonal communication. These things are seen by the artist not only as awkward for sculpture, but more significantly as secondary, temporary adjuncts to the more fundamental human conditions of passive self-enclosure and isolation he finds moving" (K. Varnedoe, Duane Hanson, New York, 1985, p. 20). A masterwork by Hanson, Old Man Playing Solitaire perfectly captures the moods of melacholy and pathos emanating a power that extends beyond its physical surface.