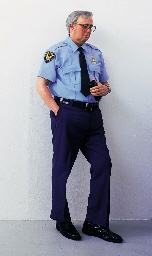 Security Guard polychromed bronze with accessories lifesize Executed in 1990. PROVENANCE OK Harris Gallery, New York EXHIBITION Montreal, Mus‚e Des Beaux-Arts; and Modern Art Museum of Fort Worth, Duane Hanson, February-October 1994, p. 62 (illustrated) Dijon, Centre d'art Contemporain, Duane Hanson, March-June 1998 London, Royal Festival Hall, Hayward Gallery, Duane Hanson on the Ballroom, December 1998-January 1999 Palm Springs Desert Museum, Virtual Reality, September-December 2000, p. 54 (illustrated) Washington, Bellevue Art Museum, Duane Hanson, June-October 2001 NOTES "While Hanson is careful to preserve the purity of the idea of recreating, in sculptural form, the presence of a living, breathing human being, ultimately it is only as a concept that such direct parity between human source and sculptural object can be attained. Since the effect must be that of a miraculous, effortless and instantaneous apparition, it is irrelevant to the perception of his art that he has recourse to a great many of the techniques of traditional sculpture - piecing together, modelling, reworking, painting - beyond making moulds and pouring casts. There can be no sign of the struggle involved in bringing a figure into being." (M. Livingstone, Duane Hanson, New York 1997) Unsurpassed for their unnerving realism, Hanson tunes into the minds of his subjects so that each sculpture wears the physical and pyschological burden of life and everyday living. The overall impact is bittersweet-- the fun and cleverness of the illusion is married with a shared empathy for the character by both artist and viewer.