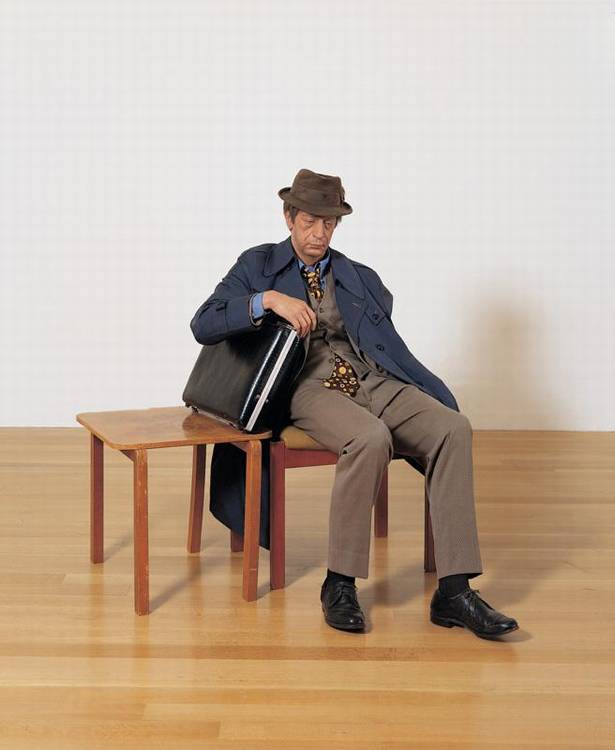 Melvyn Kaufmann, New York
Private collection, Texas
Mitchell-Innes & Nash, New York
Acquired by the present owner from the above in 1998

The Executive by Duane Hanson is a classic work by one of the twentieth century's most well known sculptors. Hanson's contemporaries, photo-realist painters such as Richard Estes and Ralph Goings, sought to capture the mundane aspects of everyday American life. However, they rarely included the human figure in their highly realistic paintings. Also capturing this aesthetic during the 60's and 70's were Pop artists such as Andy Warhol and Roy Lichtenstein. The Pop artists, however, used a more commercial and simplistic approach to portray the mass consumerism and nostalgia of the day.

Hanson, on the other hand, had an uncanny ability to portray fundamental human conditions, such as isolation, in his life-size, hyper-realistic sculptures of middle or lower-middle class Americans. Pairing his subjects with banal items such as a plain briefcase or drab overcoat (both seen in the Executive), Hanson gives the viewer a feeling of overwhelming melancholy for the everyday. As Kirk Varnadoe explains "As opposed to a "decisive moment" of extraordinary revelation, [Hanson] wants to depict states of indeterminate duration, when the ephemeral or eccentric fades in the face of the habitual, and characteristic truths stand more clearly exposed. These are also moments in which self-absorbed activities (reading, daydreaming) make the figures seemingly oblivious to their surroundings, and thus allow for prolonged inspection on the part of the viewer". (Kirk Varnedoe, Duane Hanson, New York, 1985, p. 20) The Executive perfectly embodies all of these of Hanson's most recognizable characteristics. With his dazed stare and his slouched posture, the viewer feels as if he is looking directly at not just one man, but a whole world of humanity.