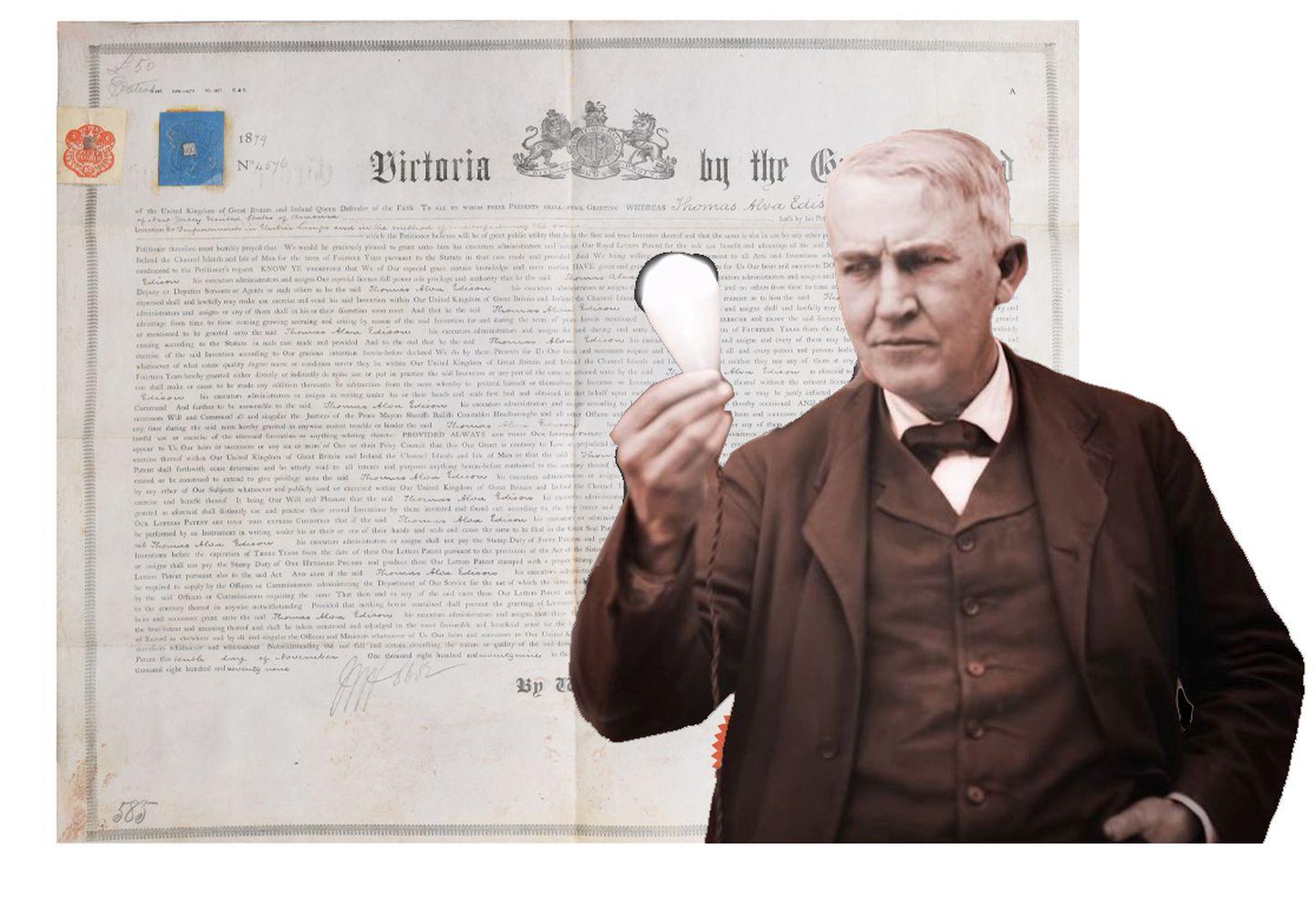 Edison's Original Patent for the Light Bulb and Archive of 37 Patents For the Birth of the Incandescent Light! The Control of Light in Europe. 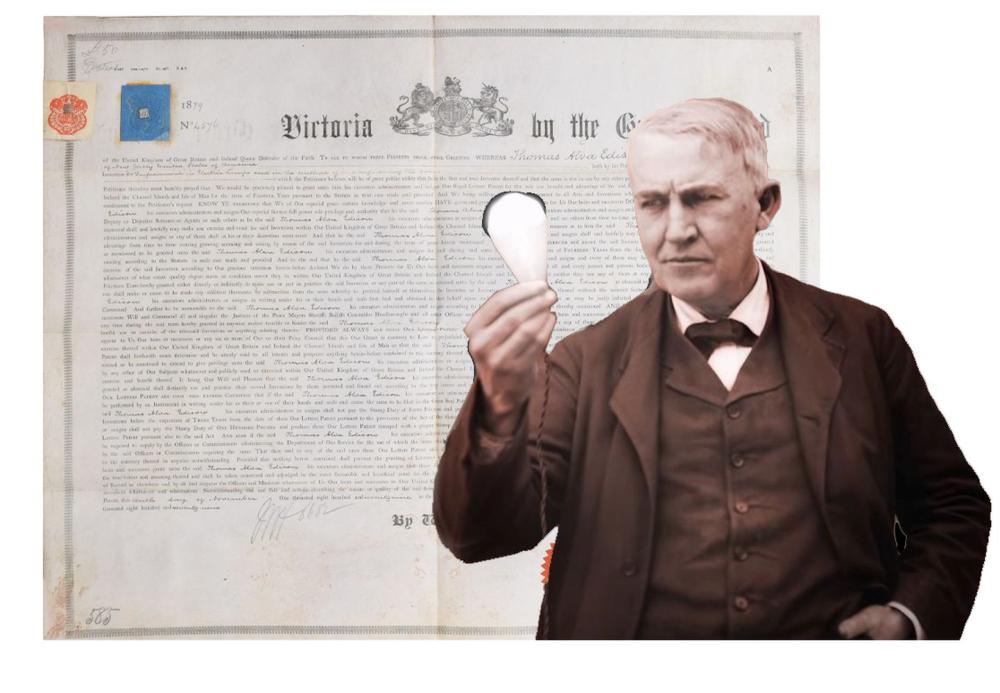 Lot 1: Edison's Original Patent for the Light Bulb and Archive of 37 Patents For the Birth of the Incandescent Light! The Control of Light in Europe.

One of a Kind Collectibles Auctions, LLC

Edison's Original Patent for the Light Bulb and Archive of 37 Patents For th eBirth of the Incandescent Light! The Control of Light in Europe

Edison's impact on life in the twentieth century was enormous, and the fame of his fertile inventive genius remains unmatched. His legacy lives on through these 37 original British Patent Letters, the very patents that gave the birth of Edison's modern-day incandescent lamp.  To relive his legendary creative process, read on. And if you're reading by lamp or ceiling light, you're already in tune with this legendary inventor. Let there be light!


This important British collection has the key patents related to the incandescent lamp, including the Thomas Edison patent he received in January of 1880- the historic patent embodying the principles of the incandescent lamp that paved the way for the universal domestic use of electric light.


Within the collection is one of the very first and important patents ever created for the light bulb: the use of a thin carbon filament. This patent was done for William Edwards Sawyer by his agent in Britain, Frederick John Cheesbrough. on November 28th, 1878 (#4847).   This patent is for improvements on an electric lamp and a mode of making uniform carbon filament thread. Sawyer and his partner, Albon Man, started The Electro-Dynamic Light Company of New York, a lighting and electrical distribution company organized in 1878. This was the first electric-lighting company formally formed. Man and Sawyer devised the first practical system of incandescent electrical lighting with their related patents. It was the first company organized specifically to manufacture and sell incandescent electric light bulbs. This is the main patent and company the George Westinghouse used to light up the Columbian world’s fair.

Then comes the historical and what is considered as one of the most valuable patents ever filed The British Patent November 10, 1879, #4576 to Thomas Alva Edison, for "Improvement in electric lamps and in the manufacturing of same" with a red seal and 2 embossed British revenue stamps. This is the same as the US patent filed just 6 days earlier as No. 223.898 on November 4th, 1879, Patented Jan. 27,1880, which gave Edison the rights of the Incandescent lamp and modern-day light bulb in the United States.  The patent was the one used for Edison in his case with the British empire and had enough merit in Britain to protect his patents and established a merger with Joseph Swan to create the Edison-Swan Light company.

Another important Edison patent in 1880 (#578) to Thomas Alva Edison in Menlo Park, NJ for "Improvement in electric lamps and in the manufacturing of same" with a great red seal and 2 embossed stamps.


Out of the 37 total patents, 24 patents are filed on behalf of Thomas Edison by either himself or an agent. They are all related to the incandescent lamp. The other 13 patents are also quite important in relation to the birth of the lighting revolution.

The collection has 4 Joseph Swan patents.  Swan an English scientist and the person who was considered to be a co- inventor of the incandescent lamp at the same time as Edison. Swan began his experiments on light bulbs at least as early as 1850 (when Edison was only 3). He first publicly displaying a successful light bulb in Feb., 1879, a number of months before Edison and unknown to Edison. He received a patent November, 1880. Swans bulbs although good for demonstration, would not last long and the where not practical.


Edison realized that the problem with Swan's design was the filament. A thin filament with high electrical resistance      would make a lamp practical because it would require only a little current to make it glow. He demonstrated his light bulb in December 1879. Swan incorporated the improvement into his light bulbs and founded an electrical lighting company in England. Edison sued for patent infringement, but Swan's patent was a strong claim, at least in the United Kingdom, and the two inventors eventually joined forces and formed Edison-Swan United, which became one of the world’s largest manufacturers of light bulbs. These patents in the collection are quite important and where used for the company to help protect against infringement of the patent rights.

Joining Forces with other Scientists

Charles Gimingham (1853-1890). Gimingham's patents were also important early incandescent lamp patents. There are two patents,  9/29/1881  (#4193) and one also with scientist Albright 10/9/1884 #313,385, for the -Edison-Swan Company) in this collection. Gimingham and his brother Edward were scientists in London. In 1881 he began work for the Swan Company. After “greatly simplifying and improving” incandescent lamps, Gimingham continued work for Swan and its successor- Edison-Swan, where he managed a factory. Gimingham was also such a well-known scientist that he had consulting work for the likes of Charles Darwin on water problems at the Darwin house.


John Francis Albright (1857-1914). Albright was a young engineer who began work with Swan in 1880. After the joining with Edison, Albright ran the ship lighting division of the company

An Incandescent Lamp for Photography

Nelson King Cherrill (1845-?). (1 Patent 11/22/1882  #5566 ) Cherrill was an early photographer, and little is known of him during the 1880’s. In all likelihood, Cherrill invented an incandescent lamp for photographic purposes. His British patent was for “Improvements in exhausting the bulbs of incandescent lamps. At the time he was a resident of Paris.

Edward Hibbard Johnson (1846-1917). (1 Patent 3/7/1882 #1094). Edison’s mentor, Known as inventor and father of the Christmas lights. The first known electrically illuminated Christmas tree was the creation of Edward H. Johnson. While he was Vice-President of the Edison Electric Light Company, he had Christmas tree bulbs especially made for him. He displayed his Christmas tree—hand-wired with 80 red, white, and blue electric light bulbs the size of walnuts—on December 22, 1882, at his home in New York City. This patent in the collection is from 10 months before that event.  Interesting enough, years before in 1871, Johnson hired the young Edison “but the whiz kid proved so brilliant and entrepreneurial that in short order their roles reversed”, said one of Johnson’s biographers C. Klein (2014)


This archive was sold by Harrod’s of London to a client in 1971 and has now surfaced. Harrods Certificate of Authenticity is included. It is one of the most important archives related to the invention of the modern-day light bulb which changed mankind and the way people work forever. it appears indisputable that these documents are part of, or all of, the patent archive of the original Edison-Swan Company.

The History of the New Lighting

Thomas Edison and Joseph Swan were both active in experiments with electricity and light, but in different parts of the world – Edison in the USA and Swan in England. Swan was the first of the two to receive a patent for electric incandescent lamps in 1879 and Edison got his in 1880. Edison had first tested his light on October 22, 1879 and received a patent on Nov. 4, 1879. That first light lasted a whopping 13.5 hours. He improved the design and received a second patent Jan 27, 1880. That lamp became the first commercially practical incandescent lamp in the world. Swan had publicly demonstrated an incandescent lamp in London in Feb 1879. With improvements, he received a British patent in November, 1880.

Meanwhile, the US Patent office voided Edison’s patent in 1883, bowing to a counterclaim by William E. Sawyer. After six years of litigation, Edison’s patent was validated and restored in 1889. In order to avoid more possible litigation, Edison and Swan got together and formed a mutual company in Britain known variably as the Edi-Swan Company or the Edison and Swan United Electric Company. It is from this company that this archive must originate.

To place a bid go to www.oneofakindauctions.com

Request more information
Contact: One of a Kind Collectibles Auctions, LLC
Auction: Rare Autograph Auction Featuring Edison's Patent
Auction Date/Time: May 14, 2020
Lot 1: Edison's Original Patent for the Light Bulb and Archive of 37 Patents For the Birth of the Incandescent Light! The Control of Light in Europe.
Cancel

Accepted forms of payment: Other

We ship via FedEx & USPS upon clearance of payment. Shipping includes expedited air shipping and insurance with signature confirmation. You will be notified of all shipping charges upon confirmation of your winning bid. Please alow for 7-14 days for packaging and shipping.

There is a 20% buyer's premium payable on top of the hammer price. This amount will be added to the winning bid. Payment methods accepted include personal and cashier's checks, and wire transfers. We do not accept credit cards. All payment must be made in U.S. dollars. FL sales tax of 7.00% is charged as applicable. Full payment is due within 14 days of the ending auction date unless an exception is made in writing. Late payments have a 2.5% fee per month added to them.

One of a Kind Collectibles Auctions, LLC

We ship via FedEx & USPS upon clearance of payment. Shipping includes expedited air shipping and insurance with signature confirmation. You will be notified of all shipping charges upon confirmation of your winning bid. Please alow for 7-14 days for packaging and shipping.

There is a 20% buyer's premium payable on top of the hammer price. This amount will be added to the winning bid. Payment methods accepted include personal and cashier's checks, and wire transfers. We do not accept credit cards. All payment must be made in U.S. dollars. FL sales tax of 7.00% is charged as applicable. Full payment is due within 14 days of the ending auction date unless an exception is made in writing. Late payments have a 2.5% fee per month added to them.