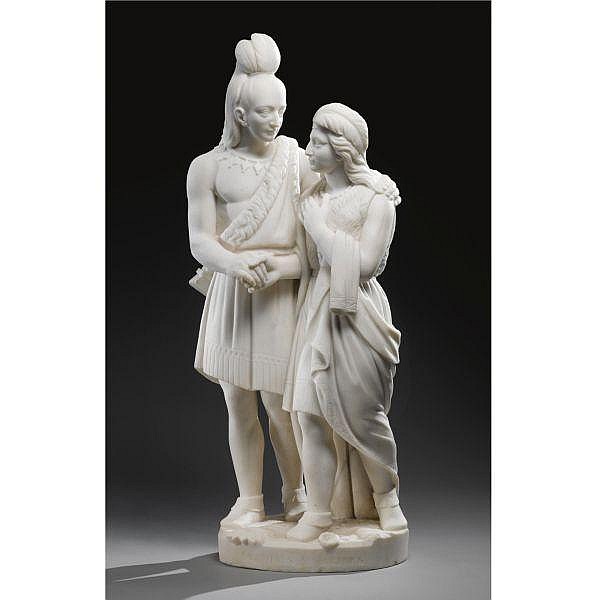 Edmonia Lewis 1844-circa 1911 , The Marriage of Hiawatha white marble

signed Edmonia Lewis and dated Roma 1874 on back of base; also titled Hiawatha's Marriage on front of base white marble

Unknown gallery, Jacksonville, Illinois
Acquired by the present owner from the above, circa 1960

Marilyn Richardson writes: "When Edmonia Lewis left the United States for Europe in 1865, she settled first in Florence and then within the year went on to Rome where she established her life and career as America's first prominent non-white sculptor. The daughter of a mother of Ojibway Indian descent, her father was a black man from the Caribbean. In Rome she was recognized as a member of the community of expatriate American and British women in the arts that Henry James dubbed the "white, marmorean flock" for the number of sculptors among them. Beginning with her portrait bust of the fallen Brahmin Civil War hero, Robert Gould Shaw, completed in Boston in 1864, Lewis and her work remained in the public eye for most of the latter part of the 19th-century. Works by Edmonia Lewis showing full-length figures are fewer in number than her portrait busts of contemporary, historical, and literary figures, copies of which were commissioned and sold in greater numbers. This newly recovered example of her group, Hiawatha's Marriage, (also titled The Marriage of Hiawatha) - - three others from earlier dates are held in private and public collections - - is an instance of her later refinement of the composition. One of her series of scenes from Henry Wadsworth Longfellow's poem The Song Of Hiawatha (1855), this sculpture interprets passages presenting Hiawatha as the " . . . hunter, / From another tribe and country, / Young and tall and very handsome . . ." who had won the heart of the maiden Minnehaha the previous year, but whom she feared might never return. In one of the loveliest sections of his epic poem Longfellow writes of their love in terms approaching an indigenous American prelapsarian Song of Songs. Lewis's composition borrows from the classical in a manner her patrons and audience would have readily recognized. Most directly, she echoes groups of Cupid and Psyche, although the couple's embrace here lacks the traditional erotic charge, replacing passion with a respectful, protective reserve. The beads at Minnehaha's neck represent their betrothal when "round [her] neck he hung the wampum /As a pledge, the snow-white wampum," and then, in the scene Lewis depicts, "From the wigwam he departed, / Leading with him Laughing Water; / Hand in hand they went together ..." Subsequent verses make it clear that Longfellow considered this journey, with their nights together in the forest, their woodland wedding, referring thereafter to Minnehaha as Hiawatha's wife. Lewis, characteristically, has clothed these Native American figures in a combination of animal pelt and elegantly draped fabric, positing both their wilderness origins and their innate finer sensibilities; all with the hint of a Roman toga for Hiawatha and a classically draped garment cascading to Minnehaha's feet. The crown-like array of feathers atop his forthright brow and guileless face implies Hiawatha's nobility of character. His elaborate necklace is his most exotic attribute. The rippling waves of Minnehaha's hair conjure the laughing water of her name. The nicely detailed leather quiver and the array of arrows attached to Hiawatha's belt speak more of Cupid than of a warrior prince from among the tribes of American Indians fighting for land and survival even as Lewis was at work in her studio on her Indian pieces of the 1860s and '70s. Within the composition the lovers lost in each other's gaze step forward into their new life together but also, as all readers of the most famous American poem of 19υth century well knew, they move toward their ultimate doom. Edmonia Lewis placed the work of the sculptor's hand at the service of the poet's romance creating the type of compelling narrative in marble embraced by a significant faction of the art-buying public of the day. Replicas of Hiawatha's Marriage were available for purchase at Lewis's Roman studio and on trips she took to the United States to exhibit and sell her work. Copies were also displayed at the National Academy of Design in New York City, in 1868, and at the Philadelphia Centennial Exposition in 1876." We are grateful to Marilyn Richardson for her assistance in cataloguing this lot.