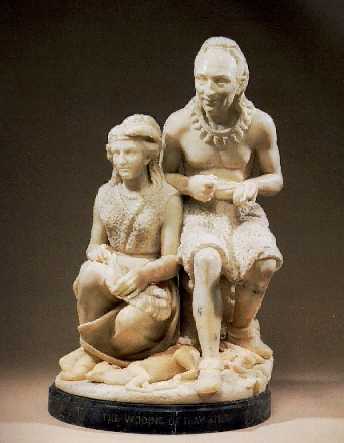 incorrectly on the base The Wooing of Hiawatha white marble on a two inch grey marble base Height: 24 in. 61 cm. The daughter of a Chippewa Indian mother and a black father, both of whom died when she was three years old, Lewis was raised by the Chippewa tribe and educated at Oberlin, Ohio, before going on to Boston, where Edward Brackett encouraged her to take up sculpture. Lewis gained widespread attention in 1866, after exhibiting a bust of Colonel Robert Gould Shaw, who had recently been killed in battle while leading a black regiment in the Civil War. The successful marketing of copies of this bust enabled Lewis to travel to Rome where she joined the ranks of other American sculptors. Wayne Craven writes: "In addition to Harriet Hosmer and Anne Whitney, several other women took up sculpture around the middle of the century. Henry James called them `the White Marmorean Flock' when he wrote of them in his biography of W. W. Story, and the epithet has stuck. The group included Margaret Foley, Louisa Lander, Emma Stebbins, and Edmonia Lewis, all of whom settled in Rome." The present sculpture is one of only three works on the subject of The Old Indian Arrow Maker executed by Lewis. It is characteristic of her work in depicting the life and legends of the Indians or the struggle of the African-American cause. Two of Lewis's sculptures were taken from Longfellow's popular work, Hiawatha. The Marriage of Hiawatha was sold in these rooms, May 27, 1992, lot 36. The Wooing of Hiawatha, according to an article in Revolution, April 1871, "represents Minnehaha seated, making a pair of Moccasins, and Hiawatha by her side with a world of love and longing in his eyes." This does not match the subject matter and composition of the present lot, and it must be assumed that its base was mistakenly titled. Literature: Wayne Craven, Sculpture in America, New York, 1968, pp. 228, 330, 333-335 William H. Gerdts, American Neo-Classical Sculpture The Marble Resurrection, New York, 1973, no. 159, p. 132, illustration of another version.