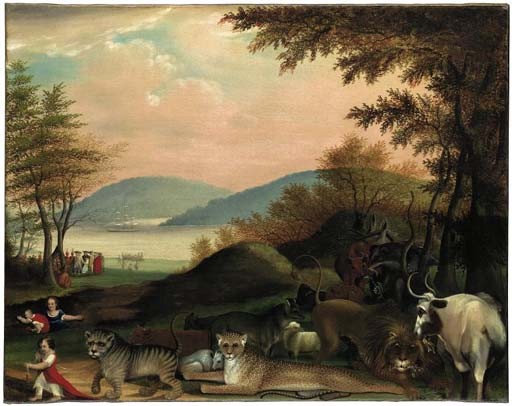 Property from a Direct Descendant of Edward Hicks

With unbroken provenance, this Peaceable Kingdom painting was completed by Edward Hicks, the charismatic Quaker minister and painter just before his death in 1849 and has remained in this family ever since. Documented as the last Kingdom picture by the artist, and created for his daughter Elizabeth (b. 1811), this final entry in the series is possessed of a decidedly autumnal tone, golden light and an introspective quality that bespeaks a certain resignation. The composition of this particular Kingdom is similar in many respects to those painted in the late 1840's, but bears several distinct and individual differences that make all the more poignant the role these images played in Hicks' life.

It is widely believed the first Kingdom pictures were begun in 1816-1818, with what is thought to be the earliest example now in the collection of the Cleveland Museum of Art. The Peaceable Kingdoms that followed are a testament to the artist's innate skill and ability to evolve his training as a sign and decorative arts painter into that of an accomplished easel artist. The Kingdom paintings he would continue to paint throughout his life would evolve in format and content, timbre and vigor, and would serve both as a visual barometer of his relationship with his religion and the ongoing schism within the Quaker Society of Friends. Though initially criticized for his indulgence in fine art painting, it's clear this work was for him a respite from the outside world at large.

Any understanding of the Kingdom pictures begins with Hicks' selection of the biblical text known as the Isaiah (11:6-9) prophecy.

The wolf also shall dwell with the lamb, and the leopard
shall lie down with the kid; and the calf and the young
lion and the fatling together; and the little child shall lead
them. And the cow and the bear shall feed; their young
ones shall lie down together: and the lion shall eat straw
like the ox. And the suckling child shall play on the hole of
the asp, and the weaned child shall put his hand on the
cockatrice' den. They shall not hurt nor destroy in all my
holy mountain: for the earth shall be full of the knowledge
of the LORD, as the waters cover the sea.

Hicks was a great believer in the powerful poetry of the holy scriptures, and the prophecies and stories in the book of Isaiah mirrored the turbulence within the Quaker community. The early Kingdom paintings were initially populated with colorful, at times calligraphic groupings of the animals taken from this text. These groups were arranged and engaged each other so as to depict the fulfillment of the Isaiah prophecy: the release of self-will as a means to achieve peace. Throughout the Peaceable Kingdom series, Hicks revised and altered the composition of his tableau with some regularity. These changes occurred largely in a metaphorical response to his own feelings as a minister, and in response to the split within the Society of Friends - a split based largely on the distinctions between the ideologies of the English Quaker Church and the Society as it evolved in colonial America.

As with all metaphorical work, the Kingdom pictures are complex and rich with content and meaning, not always immediately accessible. Many modern viewers often revel in the delightful animals and brightly colored images of the Peaceable Kingdom paintings, largely unaware of the deep meaning and sometimes turbulent messages they convey.

When viewed as a group, in chronological order, the Kingdom pictures present a broader, far more immediate story of a man's vision. Without an understanding of the painter's personal life and religious devotion, even the most casual viewer can grasp the changes in the dynamic tableau, a setting where characters come and go, and tensions arise and abate.

The early Kingdom pictures appear as uneventful, even static images. There is a calm and harmony that prevails, a characteristic that is direct contrast to the sense of struggle and tension that can be seen in a number of the middle or transition Kingdom pictures that date from the late 1820's. These early, somewhat formative images, probably composed before the artist evoked the Kingdom image as a metaphor for the discord growing within the Society of Friends, are peaceful and polite, and continue to rely heavily on the print sources from which they were inspired. The early Kingdom imagery is clearly where Hicks was teaching himself how to paint easel works. As the series progressed, Hicks gave greater attention to detail. He remodeled figures and expanded his palette. It is at this same time the images seem to take on a life of their own. In the Peaceable Kingdom paintings dating from the late 1820's through the early 1830's, the sleepy countenance of animals gives way to a disturbed caution. The animals gazes are directed toward the viewer, and becomes wide-eyed and menacing. It appears the peaceful scene has been invaded by an unknown intruder. The tree foliage moves forward, almost out of the picture plane. The landscape perspective tilts toward the viewer and draws us into the scene. The emotional image undergoes a series of shifts during this period: the foreground becomes increasingly vertical as the animals grow in size and in number dwarfing the human figures, all players in the scene appearing less and less at peace with one another and more aware of an observer gazing in from the outside. The cleft in the landscape grows and a realistic perspective is replaced by a flatness, a grouping of nearly stacked forms that are seemingly cut from paper, though no less vibrant and challenging. After the mid 1830's the extreme tension and dynamism of the setting begins to give way to a relaxed if not fatigued atmosphere. The animals eyes become heavy-lidded and the human figures become distracted, secondary players. The later Kingdom pictures painted over the remainder of his life displayed various changes in casting and theme, but at once is noticed a waning energy. By the mid 1840's, the setting is reduced to principal players. The leopard appears in a long, extended relaxed pose, the lion now nearly asleep, is depicted as heavy and unsteady. There are several Kingdom pictures from this period that suggest experimentation with another format but Hicks never settled into what might be termed a "new idea."

The composition of this particular Kingdom painting is unique in several ways. The scene retains the distant Penn's treaty grouping as well as the various animals that have populated the series, but here there is a general exodus taking place. In the foreground, humans and animals alike seem to be headed to the wings and the figures in the mid ground seem to either settle into slumber or contemplate the necessity of any movement at all. The contours of the landscape have softened and relaxed into their own peace, bathed in sunset and long shadows. The lion exhibits a frisky move that captures the attention of the nearby lamb as abrupt, if not out of place entirely and the elongated, recumbent leopard is moments from slumber.

Unique to the Kingdom imagery, and poignant in gesture, a lone bull in the lower right corner of the image departs the scene, moving seemingly from the picture plane and toward the viewer. Rendered in exceptional if not uncharacteristic realism for a Kingdom animal, the deftly painted, muscular animal pauses mid stride to turn and consider the waning scene. Illuminated from above, and casting a reflective and affectionate gaze, the bull regards the serene landscape with an apparent yearning and resignation. The Peaceable Kingdom paintings of Edward Hicks began as ground for imagination and a reflection of faith, became metaphor for instructive discipline, and in this example, acceptance and surrender, the painter's final artistic work.

1. Information in this entry was taken from Carolyn J. Weekley, The Kingdoms of Edward Hicks (Williamsburg, VA.: The Colonial Williamsburg Foundation, in association with Harry N. Abrams, Inc., 1999)