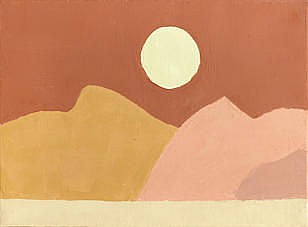 Etel Adnan (Lebanon, born 1925)
Abstract Landscape
oil on canvas, framed
executed in 2015
20 x 30cm (7 7/8 x 11 13/16in).
FOOTNOTES
"The environment was my life, maybe because I was an only child. I didn't have brothers and sisters to play with, so the light coming in through the window was a great event for me. I played with that instead of playing with other children. It was my companion. Beirut is a very sunny city and there were very few cars when I grew up. That was a blessing, because there were people in the street. I remember trying to walk on my shadow. Shadows and light were two strong entities. In Spain or southern France or Italy shadows are very strong and beautiful—the patterns are very clear. Light is an extraordinary element. It's a being on its own, it's something you look at, and that also you inhabit."
Etel Adnan

Etel Adnan was born in 1925 and raised in Beirut, Lebanon. Her mother was a Greek from Smyrna, her father, a high ranking Ottoman officer born in Damascus. In Lebanon, she was educated in French schools.

She studied philosophy at the Sorbonne, Paris. In January 1955 she went to the United States to pursue post-graduate studies in philosophy at U.C. Berkeley, and Harvard. From 1958 to 1972, she taught philosophy at Dominican College of San Rafael, California.

??Based on her feelings of connection to, and solidarity with the Algerian war of independence, she began to resist the political implications of writing in French and shifted the focus of her creative expression to visual art. She became a painter. But it was with her participation in the poets' movement against the war in Vietnam that she began to write poems and became, in her words, "an American poet".

In 1972, she moved back to Beirut and worked as cultural editor for two daily newspapers—first for Al Safa, then for L'Orient le Jour. She stayed in Lebanon until 1976.

In 1977, her novel Sitt Marie-Rose was published in Paris, and won the "France-Pays Arabes" award. This novel has been translated into more than 10 languages, and was to have an immense influence, becoming a classic of War Literature. In 1977, Adnan re-established herself in California, making Sausalito her home, with frequent stays in Paris

In 2014 a collection of Adnan's paintings and tapestries were exhibited as a part of the Whitney Biennial at the Whitney Museum of American Art. Furthermore, Etel Adnan staged an important retrospective at Mathaf: the Arab Museum of Modern Art in Doha, titled "Etel Adnan In All Her Dimensions" , curated by Hans Ulrich Obrist,

Technically terse and tonally crisp, Adnan "places her canvases flat, laid out on a table, and using a palette knife applies the paint in firm swipes across the picture's surface."

Etel's use of the palette knife allows her to work swiftly and decisively; as soon as the colour is laid onto the canvas that is a definitive choice. Her practice is one of intuition, revealing her exceptional gift as a colourist.